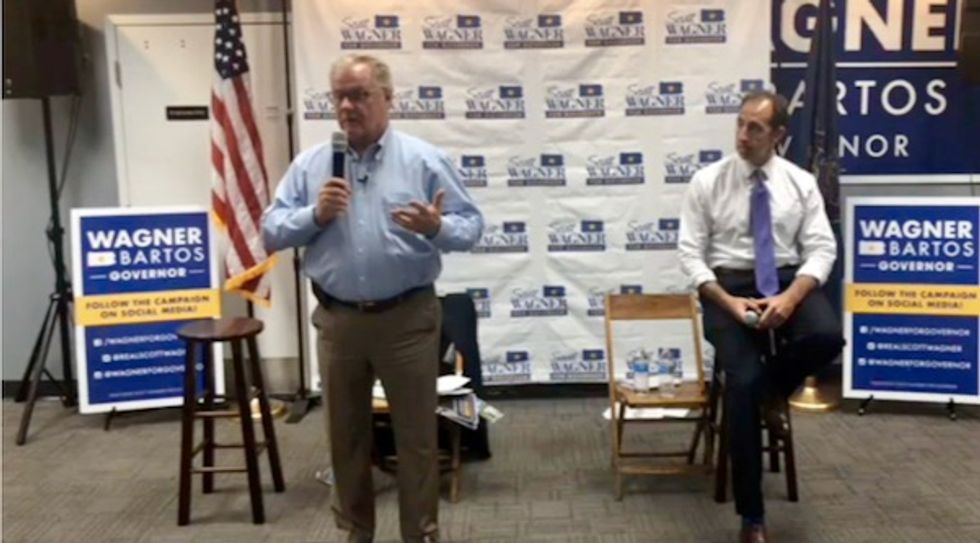 The Republican Party's nominee for governor of Pennsylvania is in hot water after telling voters he would consider banning same-sex marriage. Video from Monday night shows a voter asking State Senator and GOP gubernatorial candidate Scott Wagner if he would agree to pressure lawmakers to pass a bill to eliminate same-sex marriage in the Keystone State.

"As governor, I won't be driving that agenda," Wagner told the voter, who identified himself as Catholic, as Penn Live reports. "That'll be a House or Senate bill that will drive that agenda," he continued, not offering the only acceptable answer to the question, which would be, "The Supreme Court has ruled and marriage equality is settled law."

But Wagner didn't have the courage to offer the right answer, saying he would consider signing a bill banning same-sex marriage – which would not even be legal.

"I'll have to see when it gets to my desk for that answer," Sen. Wagner continued. "I have policy people in place and you're asking a question - I'm going to be honest with you tonight. The process is a bill would come to the House or Senate to my desk and I would have to give that consideration. I don't have the answer tonight. But I can follow up with you."

This is not a policy question, nor should he have to wait to consult with his policy people – some questions have very easy answers.

Marriage for same-sex couples is the law of the land. No governor can sign a bill revoking those rights. Any state senator in any state across the country should know that.

But more importantly that the technical aspects, Senator Wagner delivered the totally wrong answer by saying he might ban marriage for same-sex couples.

After outrage, Wagner's campaign issued a statement walking back his remarks.

Sen. Wagner's new position is that he was “caught of guard” by the question, as Philly Magazine reports. Wagner's spokesperson now says would “veto any bill that would restrict marriage rights for same-sex couples.”

Last month Wagner "held a campaign event at a weapons shop, Tommy Gun Warehouse, owned by the brother of cult leader Hyung Jin Sean Moon," as ThinkProgress reports. "Moon heads the Rod of Iron Ministries, an offshoot of the Unification Church (known to many as the 'Moonies') that is obsessed with weapons and that preaches racism, homophobia, and anti-Semitism."

Moon himself introduced Wagner at the Tommy Gun Warehouse event. Alhough Wagner tried to claim ignorance about the store’s affiliation with the cult, audio later emerged of him telling a member of the cult, “Ninety-eight percent of what you believe in, I believe in.”