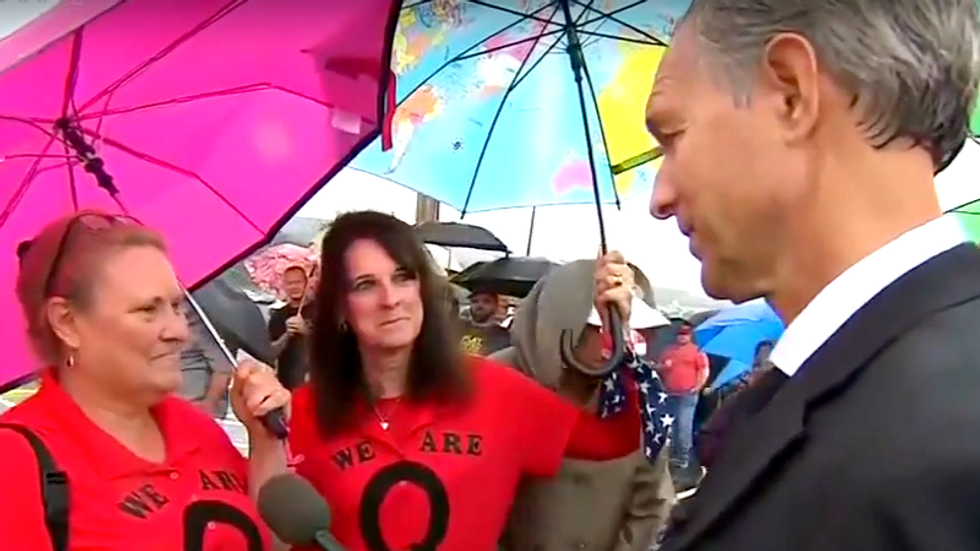 On Thursday, prior to President Donald Trump’s rally in Wilkes Barre,  Pennsylvania, CNN's Gary Tuchman asked a group of QAnon conspiracy theorists about hoa and why they have been caught up in the government conspiracy theory movement.

"We wanted to see if the people who followed this movement wanted to talk to us," Tuchman told CNN's, Anderson Cooper. "We found they did want to talk to us. What they told us was quite interesting. Waiting in line in a driving rain, very motivated Trump supporters."

When asked one simple question about what QAnon stands for and the purpose of the movement, every person interviewed gave confusing and unrelated answers.

"The QAnon is people that believe in what Trump's trying to do to change our country," a lady said.

"It means where we go one [sic] we go all," one person said.

"It's an entity of 10 or less people that have a high-security clearance," another woman added.

Tuchman then explained what QAnon is.

"More specifically QAnon is a fringe movement in which many baseless conspiracy theories are discussed on the internet, organized on the idea of anonymous but well-connected persons nicknamed Q," Tuchman he attempted to explain.

The QAnon supporters than echoed that the media is the "enemy of the people."

"You guys are weaponized by the CIA," one man remarked.

"You say stuff that doesn't even mean anything," Tuchman responded.

“The anonymous Q is a hero to many of the people here,” Tuchman told the stunned Cooper.