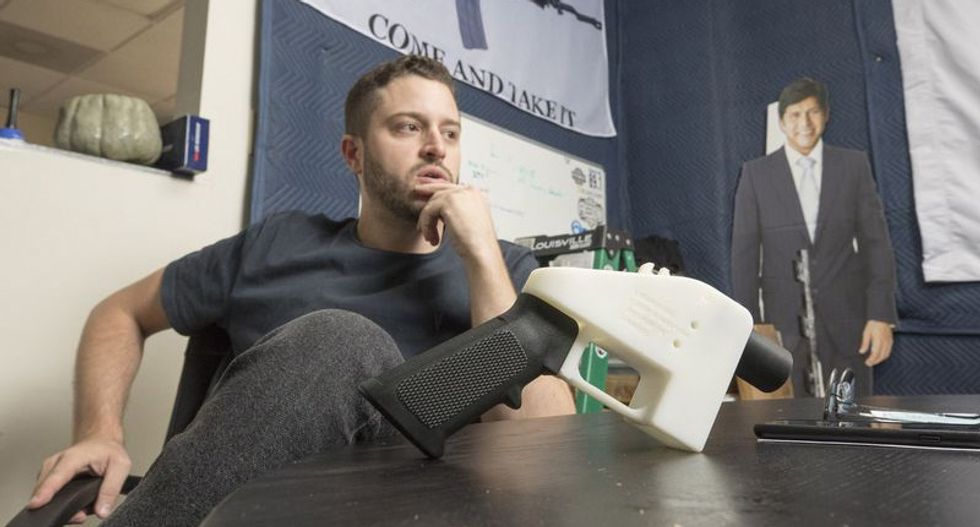 Cody Wilson, gun maker and founder of Defense Distributed, a Texas-based company developing and publishing open source gun designs for 3D printing and manufacture, in his office on August 1, 2018. Wilson has been charged with sexual assault. (Bob Daemmrich for The Texas Tribune.)

Cody Wilson, an Austin man who gained national attention for his push to make blueprints for 3D-printed guns publicly available on the internet, has been charged with sexually assaulting an underage girl, according to an arrest affidavit filed Wednesday in Travis County District Court.

The affidavit said Wilson, 30, had sex with a girl who was under 17 on Aug. 15 at the Archer Hotel in Austin and paid her $500. The girl, whose exact age wasn't revealed in the affidavit, told her story to a counselor on Aug. 22, and the counselor called the Austin Police Department.

“Sanjuro” eventually identified himself to the girl as “Cody Wilson” and told her he was a “big deal,” according to the affidavit. Police compared Wilson’s driver’s license photo with the profile image for “Sanjuro” and found a match.

Surveillance video footage obtained by police showed the two meeting in the parking lot of a South Austin coffee shop on Aug. 15. The affidavit said police obtained surveillance footage and receipts showing that Wilson drove the girl to the Archer Hotel in a black Ford Edge, valet parked the car, then took her to a room on the seventh floor. The girl told police that after they had sex, Wilson gave her five $100 bills. The affidavit said Wilson then dropped her off at a nearby fast food restaurant.

Sexual assault is a second degree felony that carries a maximum sentence of 20 years in prison and a fine of up to $10,000. It is unclear whether Wilson has been booked into the Travis County Jail.

Wilson is the founder and director of Defense Distributed, a nonprofit that publishes open-source gun designs. He made national headlines last month when he announced plans to publish 3D gun blueprints on Defense Distributed’s website.

BY MATT ZDUN, THE TEXAS TRIBUNE