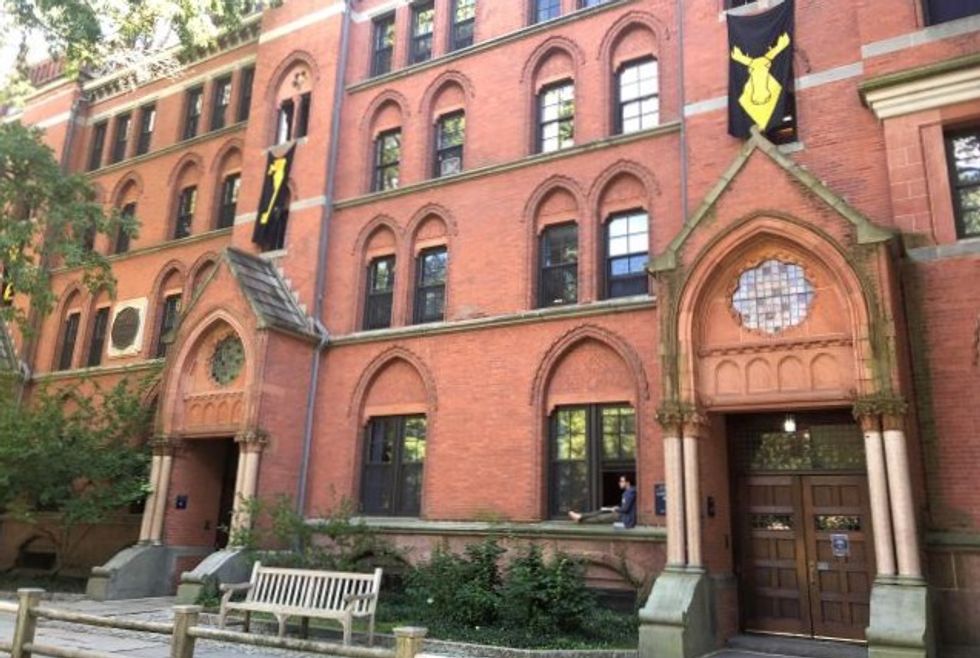 In a crowded lounge at Yale Law School, cheers erupted when the middle-aged woman on the TV screen told a Senate panel that she had no doubt that Brett Kavanaugh, a Yale graduate nominated to the Supreme Court, sexually assaulted her when they were teens.

Like millions of Americans who tuned into the hearings, the young people gathered on the New Haven campus hung on every word of the testimony, keenly aware of what the spectacle that was unfolding in Washington would mean for the political direction of the country for years to come.

The conservative federal appeals court judge in his testimony on Thursday angrily and tearfully denied he had sexually assaulted his accuser, Christine Blasey Ford.

“Her clinical language - I think she uses the word hippocampus about six times, that actually made her more not less credible to me,” he said, referring to Ford’s physiological descriptions of how the brain forms memories.

While the nominee personifies the prestige of an institution in which they have invested their own career aspirations and identity, many Yale law students said they opposed him.

Students have demonstrated on campus, papering walls with posters of support for Ford and holding a sit-in protest in the law school hallway over the nomination and the handling of Ford’s allegations.

In the law school lounge, most of the students were rooting against their fellow Yalie.

“I do not think that someone who has committed sexual assault should be on the Supreme Court of the United States,” Veronica Guerrero, a second-year law student, said.

But Yale’s public affairs office trumpeted Kavanaugh in a July press release as a “terrific judge” who wrote “smart, thoughtful and clear” opinions.

Like on the Yale campus, the hearing became a national obsession in many parts of the country on Wednesday.

On Wall Street, traders were watching the hearings with one eye while they went about their business, said Ken Polcari, director of the NYSE floor division at O’Neil Securities in New York.

“There are televisions all over the trading floor, so it’s hard not to watch it,” Polcari said. “But people everywhere are watching it.”

People posted on social media images of airplane seatback video screens all tuned into the hearings. A woman was seen crying outside a Washington office building while she followed Ford’s testimony on her cellphone.

On C-Span, the sober public affairs network that covers the federal government, female viewers called in to share their own experiences of sexual abuse on air.

“This brings back so much pain,” Brenda, a 76-year-old Democrat from Missouri, told the channel, her voice trembling. “I thought I was over it, but it’s not. You will never forget it.” She did not give her last name.

Since Ford’s name became public this month, at least two other women have come forward to accuse Kavanaugh of sexual misconduct. One of those, Deborah Ramirez, said Kavanaugh exposed his penis to her during a drunken party at Yale’s Lawrance Hall dormitory when they were both undergraduates, which Kavanaugh has denied.

In the Yale lounge, students laughed and clapped at Ford’s assured reply to a question on how she was sure that it was Kavanaugh who assaulted her: “The way that I’m sure I’m talking to you right now, it’s just basic memory functions,” Ford said.

The room erupted in applause when Senator Dick Durbin, a Democrat, made a reference to the nearly 50 Yale Law professors who have called for the Federal Bureau of Investigation to look into Ford’s allegation.

Sumer Ghazala, a first-year law student, said some students felt they had a special responsibility to speak out because of the school’s connection to Kavanaugh.

“It’s not about, ‘Oh, we’re very leftist,’” Ghazala said. “It definitely is about the fair process and taking sexual violence allegations as seriously as possible before someone is just confirmed into the Supreme Court.”