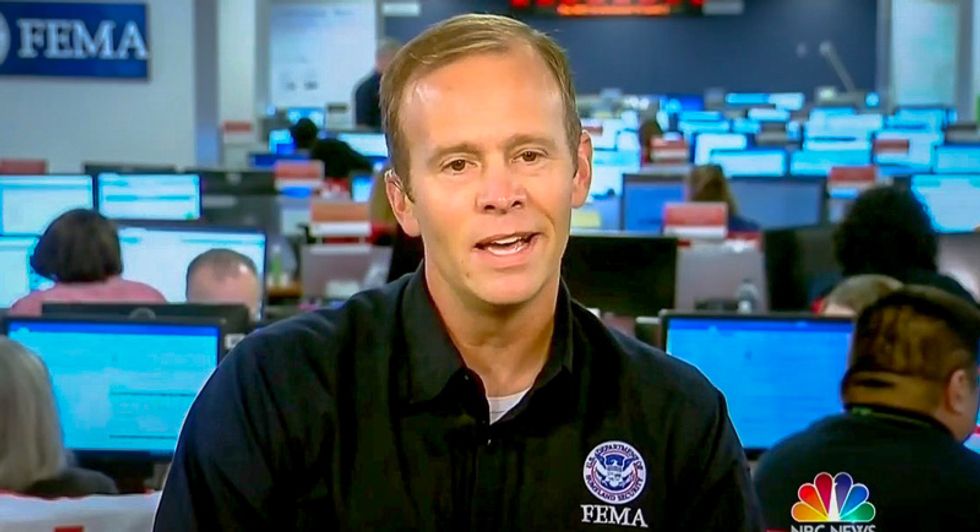 The chief of the U.S. disaster response agency FEMA was riding in a government vehicle last year when it was involved in a collision, but his name was excluded from an official report on the crash, according to people familiar with the matter.

The omission of the name of the Federal Emergency Management Agency administrator, Brock Long, was examined by the internal watchdog at the Department of Homeland Security (DHS), which oversees FEMA, as part of a wider probe of Long’s travel habits.

According to sources, the probe examined Long’s use of government vehicles without authorization, including large SUVs, to commute for months on the weekends between Washington, D.C., and his family home in Hickory, North Carolina, at a cost to the government of about $151,000.

A redacted copy of the inspector general’s investigative report seen by Reuters late on Wednesday confirmed the details of the probe, including the fact that Long’s name was intentionally omitted from the accident report.

The report also lays out evidence in which Long and his family were transported in government cars without authorization, including during a trip to Hawaii that was not for official business.

Long could not be reached for comment on the collision.

A woman who answered the door at Long’s home in Hickory declined to answer questions, as did a Homeland Security spokesman and a FEMA spokeswoman. White House officials did not immediately respond to requests for comment.

Long said on Friday: “As the leader of this agency, I accept full responsibility for any mistakes that were made.”

It was not clear on Wednesday how important the omission of Long’s name might be in the accident report.

When a government vehicle is in a wreck, a government report is supposed to be filed naming all occupants, the sources said.

As FEMA chief since April 2017, Long, 43, has won praise from President Donald Trump and admiration from FEMA staff. But the inquiry has been a distraction for the agency while it is responding to hurricane damage and heavy rain in the Carolinas.

The government-owned black SUV, with Long as a passenger, collided with another car, a source said.

An unidentified FEMA official involved in the crash told DHS investigators he omitted Long’s name from the official report at the request of a supervisor, sources said.

Long defended his use of government cars in his interview with investigators, saying he needed to have access to secure communications for national security reasons, the report says.

However, lawyers at FEMA had previously informed him he did not have authorization to use government cars for commuting unless he received a waiver.

In addition, they said, using government vehicles for commuting would cause him to incur taxes because it was considered a fringe benefit, according to the report.

When hearing this, Long said he would use the train instead as he could “not afford the additional tax burden,” the report says.

Later, when asked about this by investigators, Long denied instructing his staff not to seek permission to use the cars, but also told them he was “going broke and in the hole every month.”

Reuters previously reported that the inspector general’s report was referred to federal prosecutors, though it is unclear what they might do with the referral.

The House Oversight Committee is also probing the matter.

On Thursday, its ranking Democrat Elijah Cummings lambasted Long for his “apparent violations of federal law” and demanded a briefing on how FEMA will “claw back” the $151,000.