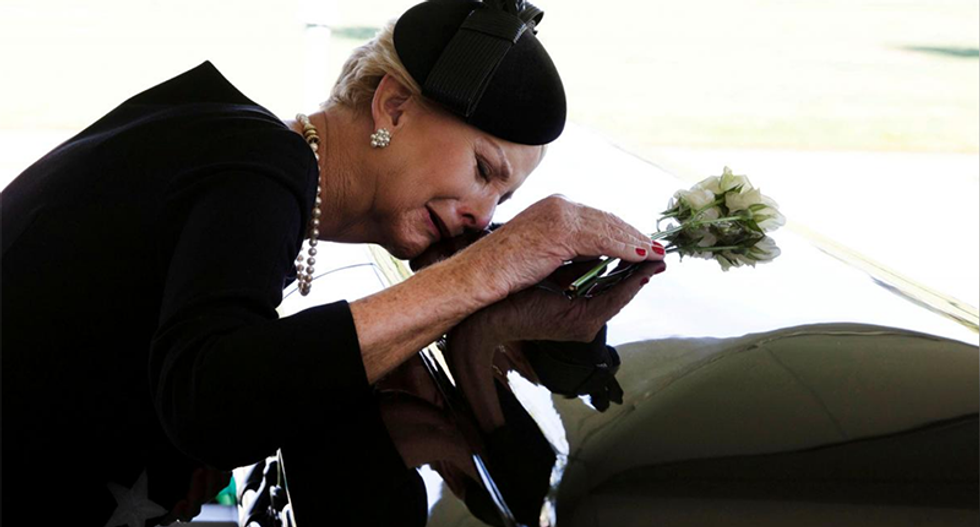 Cindy McCain lays her head on the casket of Sen. John McCain, R-Ariz., during a burial service at the cemetery at the United States Naval Academy in Annapolis, Md., on Sunday, Sept. 2, 2018. David Hume Kennerly/McCain Family/Pool via Reuters

Fighter jets roared over the U.S. Naval Academy on Sunday in a final tribute to former Senator John McCain as the Vietnam War hero and two-time presidential candidate was laid to rest at the military college that began his career six decades ago.

As three F-18 jets from the Navy’s Blue Angels show squadron streaked overhead, a fourth plane broke formation and arced skyward, marking the conclusion of an extraordinary five-day show of mourning for one of the United States’ most admired politicians.

Family and friends, along with the Naval Academy’s class of 1958 and its current student body, bade a final farewell in a private service at the Naval Academy chapel before McCain, who died Aug. 25 at age 81, was interred in a cemetery on the academy grounds.

“I watched them lay my friend to rest today. I will miss him,” Senator Jeff Flake, who represented Arizona alongside McCain in Congress, wrote on Twitter.

Crowds gathered along the route of the motorcade bearing McCain’s body. At one point, a large American flag hung suspended between two cranes on a bridge.

McCain’s burial plot was next to his classmate and friend, Admiral Chuck Larson, a former commander of U.S. Pacific Command who died in 2014, according to the McCain family.

Among those paying tribute to McCain at Sunday’s private service were his sons Jack and Don, retired Army General David Petraeus and Senator Lindsey Graham, a long-time political ally and friend.

McCain, an often imposing presence for decades in U.S. defense and foreign policy, was eulogized by former U.S. presidents Barack Obama and George W. Bush, as well as his daughter Meghan McCain on Saturday at a Washington ceremony.

Without naming Trump, McCain’s daughter, Bush and Obama all rebuked Trump, who feuded with the late senator and mocked his military service, which included 5-1/2 years as a prisoner during the Vietnam War.

During both the Washington ceremony and the Annapolis burial, Trump was at his private golf course in Virginia.

Before the burial Graham, appearing on CNN, said; “I’m going to try to focus on the fact that I’m going to admit to what I’ve lost. I cannot think of anything I’ve done in politics of consequence, any cause I’ve engaged in, that John was not there, that I was not his wingman.”

Joseph Lieberman, a former U.S. senator and close friend, said on CNN: “I say goodbye and my heart will be heavy. I’ll shed a tear and yet I’ll thank God that I knew a man like John McCain so well.”