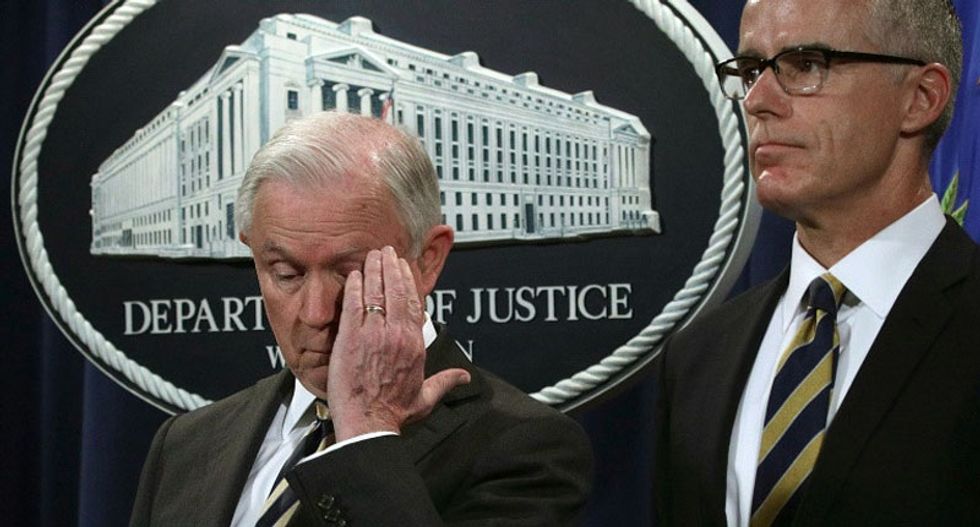 If President Donald Trump thinks the way he can control special counsel Robert Mueller is by firing Attorney General Jeff Sessions, senators are warning him to think again.

According to Politico, one Republican senator said the only way Trump could get another senator confirmed for attorney general is if he has a record of being 100 percent loyal to the president. That list is extremely short.

“Trump may very well want a change,” said Sen. Orrin Hatch (R-UT). “If I was the president I’d even consider picking a Democrat if I thought I couldn’t get anybody else through.”

Trump has said that he wanted an AG like Eric Holder, who he viewed as a defender of former President Barack Obama.

"I don't want to get into loyalty, but I will tell you that, I will say this: Holder protected President Obama. Totally protected him," Trump said during a New York Times interview in Dec. 2017. "When you look at the things that they did, and Holder protected the president. And I have great respect for that, I'll be honest."

One Republican close to the White House told Politico that the only one who could fit the criteria would be Sen. Lindsey Graham (R-SC), who has been seen golfing with Trump over the summer.

Last month, aides leaked that Trump has said privately he intends to fire Sessions after the midterm elections. However, Republicans aren't optimistic about getting a new appointee confirmed during the lame duck session. Red state Democrats will have little reason to placate the president and Republicans will have no reason to protect themselves. If Republicans lose the seats in the Senate, it could be outright impossible.

Sen. Ben Sasse (R-NE) has already said it would be difficult for him to support someone Trump appointed to succeed Sessions if he were fired.

When asked whether Senate Leader Mitch McConnell could confirm a Sessions replacement, all the Kentucky senator would say is that he hops Sessions stays.

“Assuming that the Democrats voted together against the nominee, I think you would have some Republicans who may well vote against the new nomination,” said Sen. John Kennedy (R-LA).

Politico said that the most optimistic they could find among Republicans were those claiming a "cloud may lift" after the election. Though, it seems unlikely Trump is reigning himself in to help the GOP for November.

The only way out is if Sessions leaves the AG office voluntarily.

During a Wednesday floor speech, Sen. Jeff Flake (R-AZ) nailed the president for his Tweets blaming Sessions for refusing to cover up GOP scandals.

“The President attacked Mr. Sessions by name,” Flake said, “for refusing to cover up allegations of Republican misconduct. The President’s concern was not for justice but for the political fortunes of the accused because their congressional seats might now be at risk of falling to Democrats. In doing this, the president is projecting a vision unto the system of American justice that is both bizarre and, more important, destructive.”