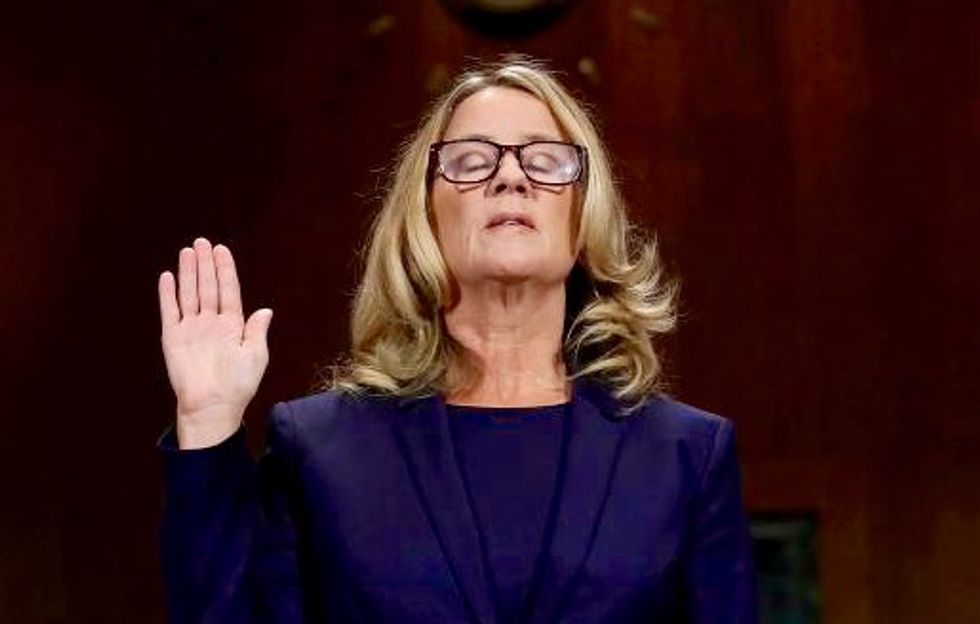 Christine Blasey Ford is sworn in before testifying the Senate Judiciary Committee in the Dirksen Senate Office Building at the Capitol Hill in Washington, DC, U.S., September 27, 2018. Win McNamee/Pool via REUTERS

For sexual assault survivors, Christine Blasey Ford emerged as a new hero on Thursday, triggering a surge in calls to a national rape hotline as she told senators that Supreme Court nominee Brett Kavanaugh assaulted her when they were teenagers.

But even as many saw her nervous yet assured testimony as a landmark moment for the #MeToo movement, the skepticism, indifference and even scorn she faced, both from Republican senators and online critics, was disturbing to victims and their advocates.

Kavanaugh, nominated by Republican President Donald Trump to fill a pivotal vacancy on the U.S. Supreme Court, has said he has never assaulted anyone and that Ford may have mistaken him for someone else.

With the Senate vote on whether to confirm Kavanaugh delayed to allow the FBI to examine Ford’s claims, it may take another week or longer before anyone can measure the effect, either empowering or chilling, the hearing will have on assault survivors. In the end, Kavanaugh’s confirmation or withdrawal may be the determining factor.

“Watching the way she was spoken to and spoken about, it was so retraumatizing to watch that happen,” said Jess Davidson, interim director of national advocacy group End Rape on Campus, who said she was a victim of sexual assault. “If he’s confirmed, I think it will make it harder for survivors everywhere to believe that when they come forward they will be heard and supported.”

The back-to-back testimony of Ford, a research psychologist at the Stanford University School of Medicine in California, and Kavanaugh, a federal appeals court judge in Washington, exposed the fault lines in the national debate over sexual misconduct.

Many, especially Republicans, accepted Kavanaugh’s angry testimony that he was a decent, hardworking man wrongly accused in a politically motivated smear.

Experts said Ford’s testimony, in which she explained in scientific terms how trauma affects the formation of memories in the brain, was reassuring to victims who might worry that they do not remember every detail of an attack.

Ford also described the upheaval in her life since she came forward with her story, which many victims might view as reason to not report their own assault. Ford said her family has had to leave their home after she received threats, and she has been criticized on social media by those who think she is lying.

Abrianna Morales, who founded the Sexual Assault Youth Support Network after she was molested two years ago when she was 15, said the omnipresence of social media made it difficult to avoid attacks against Ford’s character.

“Well, if I come forward, will I be responded to in the same way?” Morales said.

Ford’s appearance stirred at least two women to berate Senator Jeff Flake on Friday as he tried to close the doors of a Senate elevator after he said he would vote for Kavanaugh. CNN footage showed him listening wordlessly, sometimes avoiding eye contact, as one woman said the confirmation would send a message to victims of sexual assault that they would not be believed.

Hours later, Flake, a key Republican vote on the Senate Judiciary Committee overseeing the hearings, changed his position, voting for Kavanaugh but demanding an FBI investigation and requesting a one-week delay in the full Senate vote on the nominee.

Ford appeared to move others to action too.

The Rape, Abuse and Incest National Network (RAINN) said calls to its national sexual assault line surged about 200 percent above normal on Thursday, the day of the nationally televised hearings. The group did not respond to a request for the number of calls.

“We often see an uptick when sexual assault is in the news,” Sara McGovern, a RAINN spokeswoman, wrote in an email.

On Twitter and other social media sites, people who found no reason for suspicion that Ford did not publicly accuse Kavanaugh for 36 years began sharing their own experiences, using the hashtag #WhyIDidntReport.

Padma Lakshmi, host of the television show Top Chef, revealed for the first time in a New York Times essay this week that she was raped 32 years ago.

The National Organization for Women and other activist groups and women’s rights organizations called for protests against Kavanaugh’s confirmation at senators’ offices around the country and circulated a petition to have him removed from the bench entirely.

Rachel Carmona, chief operating officer of the activist organization Women’s March, said it was difficult to watch Ford questioned as if in a criminal trial, but that even the backlash Ford faced had become something to rally around.

“It’s an opportunity to dig our roots in deeper and say we are not going to budge on the issue of our fundamental human rights,” Carmona said.