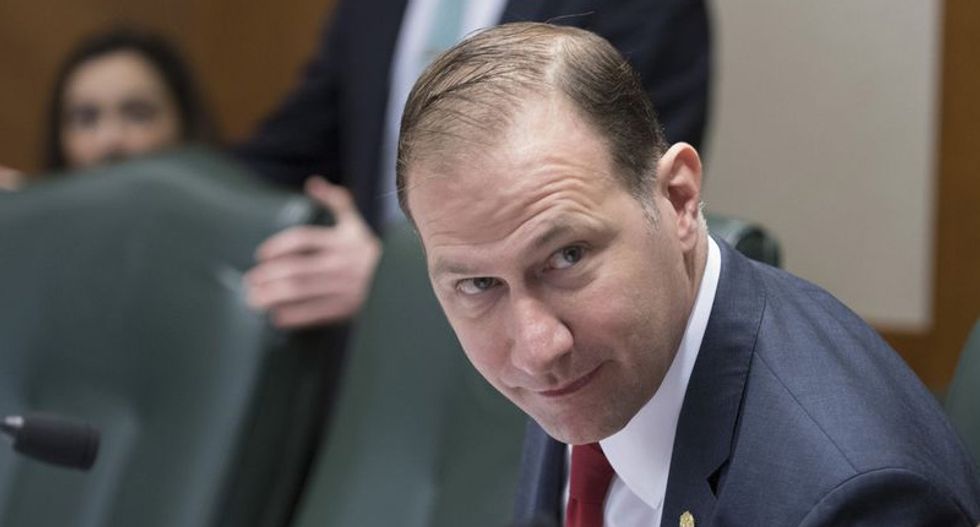 Sen. Charles Schwertner, R-Georgetown, in a Texas Senate Business and Commerce Committee hearing in Austin on Mar. 9, 2017. (Bob Daemmrich for The Texas Tribune.)

The University of Texas at Austin is looking into an accusation that state Sen. Charles Schwertner, R-Georgetown, sent sexually explicit material to a graduate student, according to the Austin American-Statesman in a Tuesday report that cited unnamed UT officials. A source with knowledge of the matter confirmed to The Texas Tribune that an investigation has been opened.

A spokesperson for Schwertner said the lawmaker "categorically denies knowledge of" the allegation. A UT-Austin spokesperson said "the university does not discuss ongoing investigations." The Statesman has not seen the materials, which reportedly include a graphic photo and text message that were sent to the student after she met Schwertner at an on-campus event.

Tom Holloway, the Schwertner spokesperson, said in a statement that the senator "only became aware of this allegation when contacted by the media late this afternoon. The Senator is eager to cooperate with the University of Texas and hopes to make clear he played no part in the behavior described.”

Gary Susswein, the UT-Austin spokesperson, said that "the University of Texas takes all allegations of wrongdoing seriously and encourages members of the campus community to report them immediately. We strive to investigate complaints thoroughly and quickly while respecting the confidentiality of students and employees who file complaints and those accused of wrongdoing. UT is strongly committed to fostering a safe campus environment and to providing needed support and resources to victims."

A spokesperson for Republican Lt. Gov. Dan Patrick said Tuesday evening that Patrick learned of the allegation earlier this afternoon and “will await the outcome of the UT investigation.”

Last year, two of Schwertner's fellow senators were also accused of sexual misconduct. Democratic state Sens. Carlos Uresti of San Antonio and Borris Miles of Houston, who faced allegations of harassment and assault, both denied the allegations. Uresti resigned his seat this year after he was convicted of 11 felonies, including fraud and money laundering.

BY SHANNON NAJMABADI, THE TEXAS TRIBUNE

George Floyd's accused killer, Derek Chauvin, is on trial and I can't turn away.

Since the video showing the kneeling on the neck of a 46-year-old unarmed Black father, who then died, by a police officer with a history of fatal force went viral, so did their names, sparking one of the biggest social justice movements in global history. So yes, Derek Chauvin's trial, which is set to conclude early next week, will be televised.