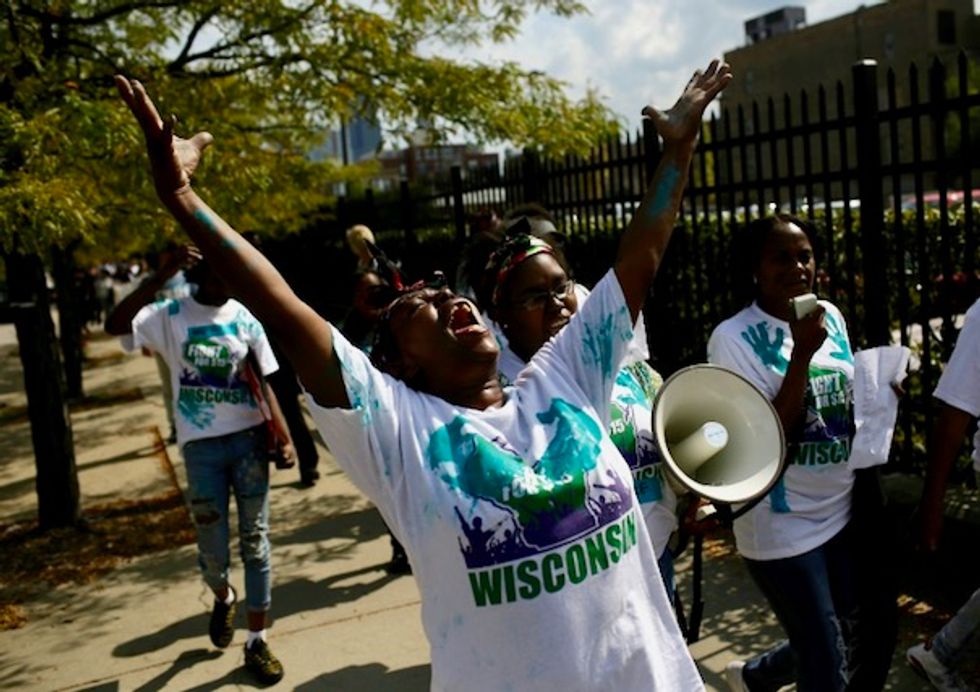 McDonald's workers in 10 US cities staged a day of protests Tuesday inspired by the #MeToo movement, accusing the fast food giant of failing to address pervasive sexual harassment at its restaurants.

Billed as a strike, organizers said the protests were the first of its kind aimed at getting the company to start taking serious action to curb incidents including groping, lewd comments and propositions for sex in the workplace.

The protests are part of a broadening of the #MeToo campaign -- mostly aimed at high-profile targets in entertainment, media and politics -- into the realm of low-wage, blue-collar work, where employees without wealth or influence can be particularly vulnerable.

"When you feel that your livelihood is threatened, and you feel like you can't bring home a paycheck, it can be really scary," said Ali Baker, a restaurant worker speaking at a small but boisterous protest in front of McDonald's global headquarters in Chicago.

Dozens of the company's workers and their supporters held banners, chanted, and detailed examples of their own experiences.

"I'm on strike and standing here today for change," said one longtime McDonald's employee who claimed she knew of managers regularly harassing employees.

"Sexual harassment is a universal issue. It's a disease," she added, standing in front of other workers who had fixed their mouths shut with blue tape displaying the words "on strike" and "me too."

Similar scenes played out in nine other cities, including Kansas City and Saint Louis, Missouri, as well as Durham, North Carolina.

In Los Angeles, a loud crowd of demonstrators took to the streets, while in San Francisco there was a silent protest by employees who also had their mouths taped.

The protests drew the attention of US Senator Bernie Sanders, whose nationwide progressive movement is seen as having pulled the Democratic Party to the left.

Sanders said on Twitter that the harassment being alleged by fast-food workers was "simply unacceptable."

"We must stand with the brave McDonald's workers walking out today to demand the company address this epidemic of sexual harassment," he said.

The strike came four months after women who have worked for McDonald's in nine US cities filed sexual harassment claims with the US Equal Employment Opportunity Commission.

"Today, thousands of workers across the country have stepped out of the shadows and onto the picket lines," said Chicago community organizer Karla Altmayer.

"We can no longer accept that one out of two workers experience workplace sexual violence under their watch," she said of McDonald's.

Workers want the fast food giant to form a committee -- made up of workers, company management and leaders of national women's groups -- to figure out how to address the issue.

In a statement, McDonald's said that it had "strong policies, procedures and training in place" to prevent sexual harassment.

The company also said it had engaged prevention and response experts "to evolve our policies so everyone who works at McDonald's does so in a secure environment every day."

Contrary to some descriptions of the day's events, company spokeswoman Andrea Abate told AFP there were in fact no "reported walkouts" during today's protests.

"For context, a 'walk off' is when an employee clocks in for a shift and then during that shift chooses to walk out/off," she said in an email.

Advocates have long complained that low-wage and blue-collar workers are highly vulnerable to sexual harassment, as they are more dependent on their monthly paychecks and often have fewer resources for help.

As the #MeToo movement has spread, other blue-collar workers have stepped forward with their own stories.

Female workers at a Chicago-area Ford plant have sued over widespread harassment dating back decades. The automaker apologized in December and promised to make changes.