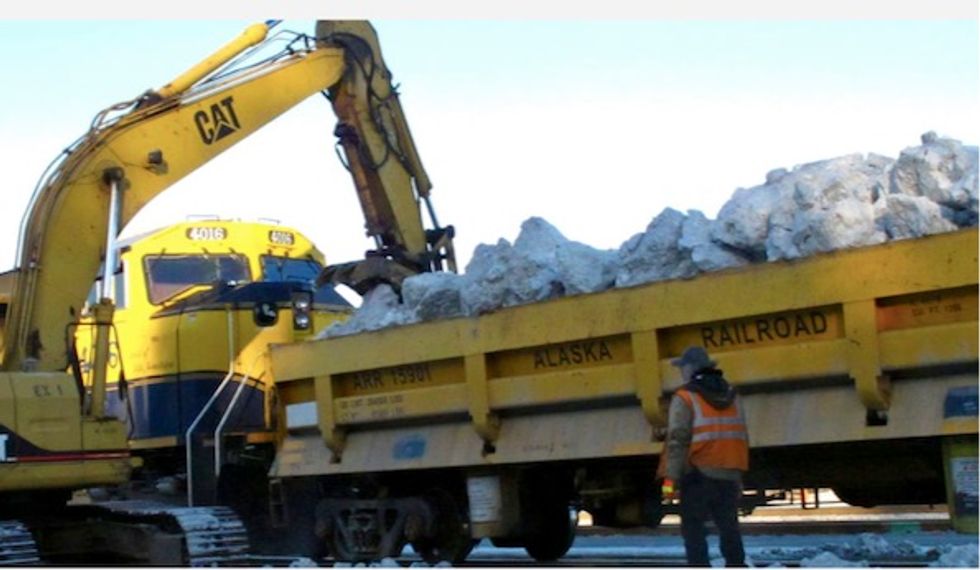 2016’s warm winter meant not enough snow for the start of the Iditarod sled dog race in Anchorage, so it was brought by train from 360 miles north. AP/Rachel D'Oro

Coastal villages are washing into the Bering Sea, trees are sprouting in the tundra and shipping lanes are opening in an ocean that was once locked in ice. In Alaska, climate change isn’t a distant or abstract concern.

For everyone from the National Park Service to the military, from the oil industry to city managers to traditional hunters, adapting to climate change is the new reality in Alaska.

The Aggie Creek Fire near Fairbanks in 2015.

Almost 12 years ago, we embarked upon a new research effort at our state university. The idea was simple: Meet the needs of those planning for our state’s future by providing information on climate change that was local, relevant and scientifically valid.

First named the Scenarios Network for Alaska Planning (SNAP), we soon had to add the word “Arctic” to our name, because we realized that Canada and other countries from the polar region were as eager for long-term forecasts of climate change trends as Alaska was.

In the Arctic and sub-Arctic, climate change is accelerated and its effects are profound. This is primarily the result of what is known as the “albedo effect”: As we lose reflective ice and snow due to warming, more heat-absorbing dark ground and water are exposed. Thus, local warming gets even more extreme.

Just where climate change effects are extreme, data is often limited. Few weather stations offer long-term reliable histories. Populations are sparse. So we glean information from a variety of sources and combine that with historical data and the accumulated knowledge of people who live on the landscape. All point incontrovertibly to a warming environment. 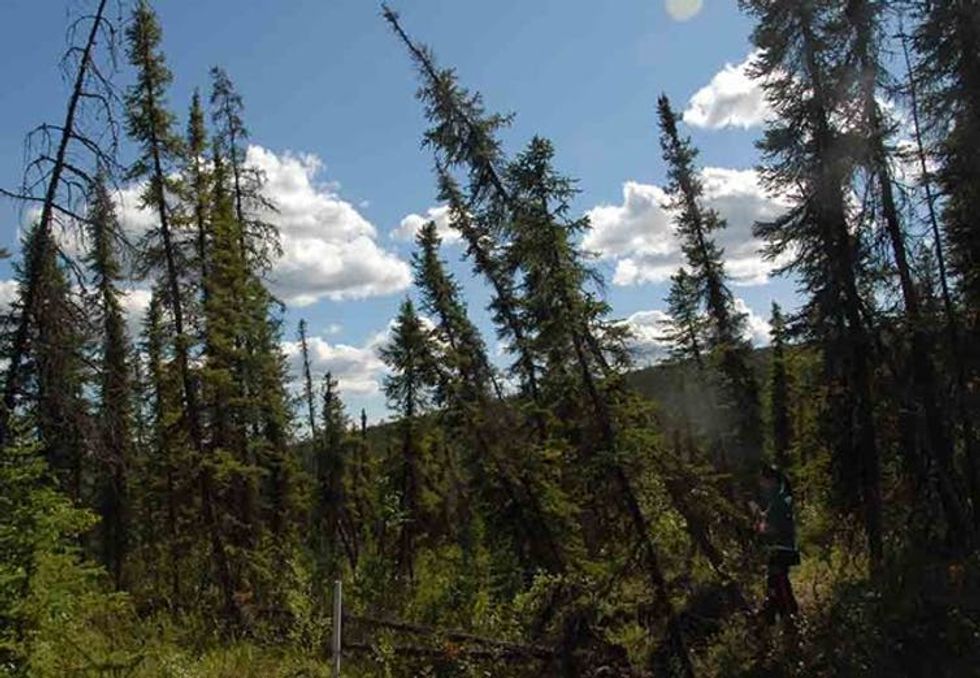 The ‘drunken forest,’ where trees lean and tilt when the permafrost under them thaws.

The ways in which this change plays out are as diverse as the people and landscapes of Alaska.

Our state includes not only Arctic tundra underlain by the permanently frozen ground called “permafrost,” but also vast stretches of spruce, birch, aspen, alder and willow trees: the boreal forest. To the west, the windy Aleutian islands stretch out into the Pacific, and to the southeast, Alaska hugs the coast of British Colombia and boasts dense and towering coastal rainforest.

Across the state, hundreds of small communities – primarily Alaska Native villages – are not connected to the road system. Accessible only by air, sea, river or winter trails, these communities maintain traditional subsistence lifestyles based on hunting, fishing and gathering food and other resources.

Meanwhile, the state’s coffers are enriched by money from oil and gas extraction – which are both primary sources of climate change, an irony that has not gone unnoticed by those struggling to craft long-term plans for Alaska.

With 6,640 miles of coastline, Alaska is an ocean-dependent state. Due to loss of sea ice that protects soft soils from seasonal storms, huge stretches of this coastline are washing into the Bering Sea. For communities at risk of erosion, all other concerns pale in comparison. At stake are not only structures and money, but also traditions, a sense of place, and even lives. 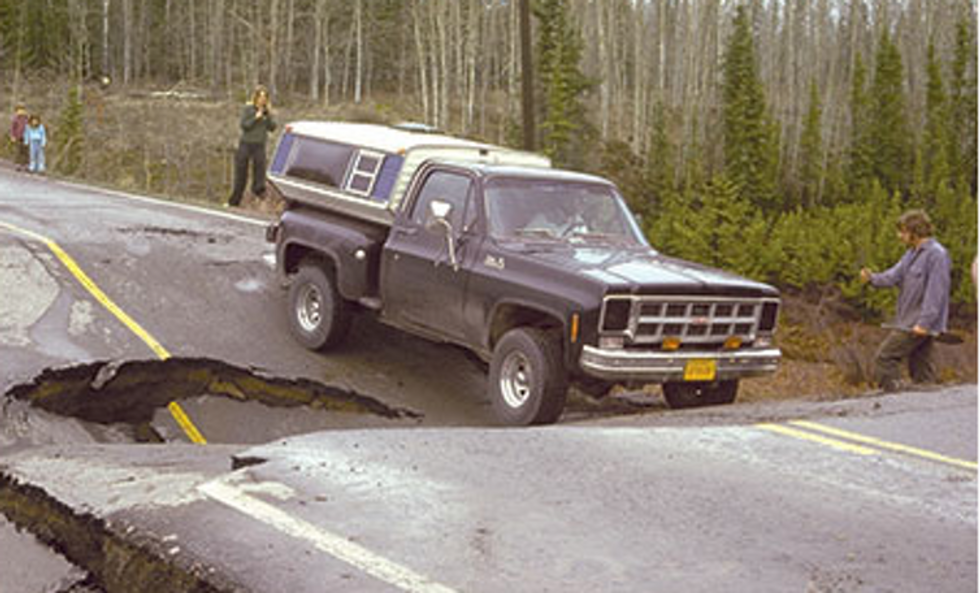 Thawing permafrost caused this buckling on the Alaska Highway.

In Shishmaref, an Inupiat village with about 500 residents, homes have slipped off cliff edges and a hunter fell through thin ice. Relocation is costly and a last-ditch option.

On the coast of the Arctic Ocean, walruses, seals and polar bears are no longer finding the ice they need to rest, hunt, mate and breed. The shortening sea ice seasons are also threatening traditional hunting practices.

Even for inland residents, the health of the ocean is crucial, because the salmon caught in Alaska’s rivers fatten in the open ocean. Should climate change render the ocean too acidic due to changing atmospheric carbon, the tiny sea snails on which the salmon feed would be at risk because they may no longer be able to form their shells.

In the interior of the state, forest fires are burning bigger and hotter than in the past. The boreal forest system is dependent on the renewal of young vegetation after a burn. But with hotter, drier spring weather, sparks from dry lightning have torched millions more acres than usual. Neighborhoods have been evacuated, and dense palls of smoke have spread across the state.

As organic soils thaw, they start to decay, which in turn releases carbon into the atmosphere. These carbon releases, which exacerbate climate change, are particularly potent in the form of methane bubbling from lakes.

About half the population of Alaska lives in Anchorage. Here, livelihoods tend to be more urban, but recreation often depends on snow – snow that is not showing up.

The Iditarod sled dog race has had to move its starting line and reroute mushers. Tourism businesses are suffering. The city, like many communities around the state, is working on a climate change adaptation plan.

Meanwhile, around the state capital of Juneau and other Southeast Alaska communities, the mountains are losing their snow caps early and gaining them late. Water is flowing downstream out of season, which may impact everything from salmon stocks to hydroelectric power generation. Iconic yellow cedar trees are dying due to lack of protective snow cover on their roots.

Here, as elsewhere in the north, whole ecosystems are changing, putting some migratory birds such as eiders and some small Arctic mammals such as pikas and marmots at risk. Also threatened are lifestyles and livelihoods linked to Alaska’s caribou herds, which may be losing the lichen they need to survive. 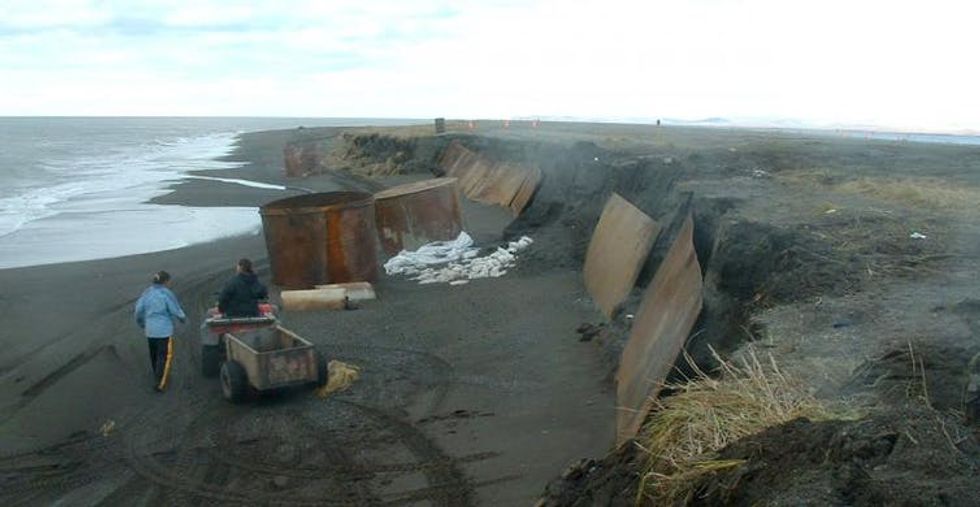 The airstrip in Kivalina, an Alaska Native village, is in danger of being wiped out by erosion.

Although mitigation of climate change via reductions in global greenhouse gas emissions is crucial, even the most optimistic scenarios include substantial shifts in temperature for many decades into the future. While adapting to this change is likely to be costly, failing to adapt will be costlier still.

Recognizing this, Alaska’s communities and land managers are taking action.

For the past year, a statewide plan has been in development. The University of Alaska and the municipality of Anchorage are creating a Climate Action Plan to address issues as diverse as invasive beetles, cultural loss and lack of skiing opportunities. For the village of Newtok, planning meant seeking federal funding for total relocation.

When a glacier at the heart of a National Park is rapidly melting, the thaw itself becomes part of the educational mission of the park. Federal agencies, including the National Park Service, the Department of Defense, the Bureau of Land Management and the Forest Service are working with my planning group and other partners to incorporate climate change into their visions of the future.

For those who live and work in Alaska, adapting to such profound changes in our state is hard. Failing to do so would likely be catastrophic.