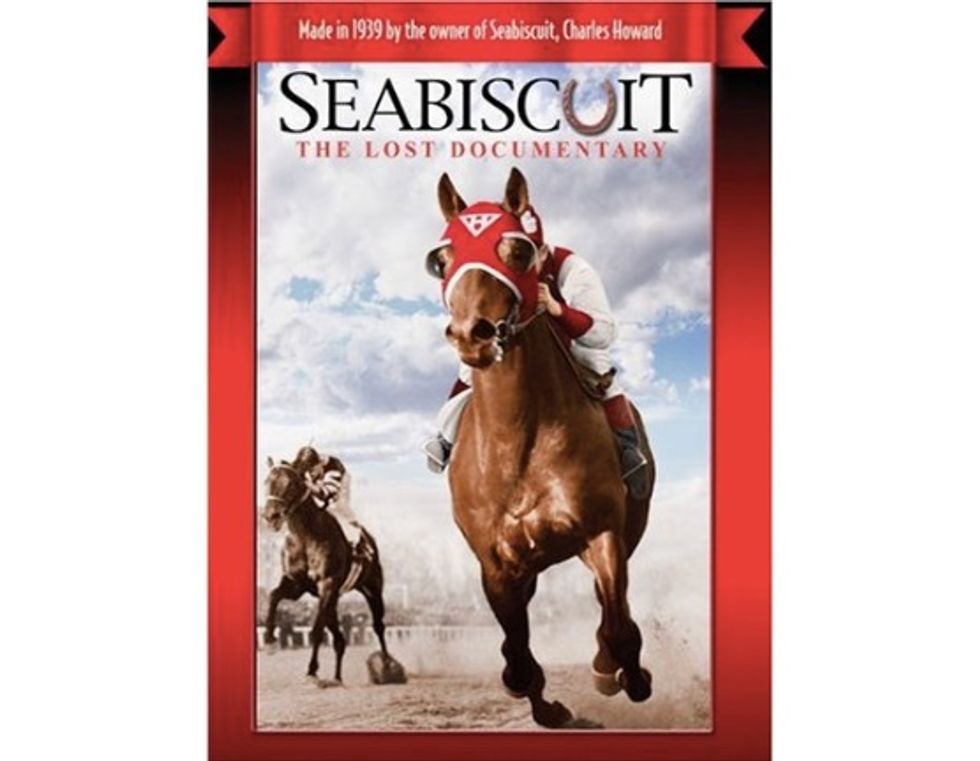 Seabiscuit was not an impressive-looking horse. He was considered quite lazy, preferring to eat and sleep in his stall rather than exercise. He’d been written off by most of the racing industry after losing his first 17 races. But Seabiscuit eventually became one of the most beloved thoroughbred champions of all time – voted 1938 Horse of the Year after winning his legendary match race as an underdog against Triple Crown winner War Admiral in 1938.

As a molecular physiologist, the concept of understanding how specific gene variants can affect performance, whether in athletics, learning or even how an organism develops, has always intrigued me. Thoroughbred racing seemed a promising arena to study this idea, since successful racehorses need not only elite physical attributes, but also the mental makeup of a champion, sometimes referred to as the “will to win.”

At the Institute for Equine Genomics here at Binghamton University, we try to better understand the genetic components associated with breeding success in thoroughbreds and other horse breeds. We are also interested in finding gene variants that could help horses before and after their racing careers. We’ve successfully run tests for horse farms across the U.S. and in South Africa and New Zealand to assist with breeding decisions and help them identify early which horses were probably not suited for the track.

A few years back, Jacqueline Cooper from the Seabiscuit Heritage Foundation got in touch. She wanted to genetically test a fifth-generation descendant of Seabiscuit, named Bronze Sea, for breeding purposes. Jacqueline asked if any genetic information about Seabiscuit could be obtained from sequencing Bronze Star. But since Seabiscuit was so far back in the pedigree, our lab really couldn’t be sure which of Bronze Star’s genes came from his famous great-great-great grandsire. It would only work if comparison tissue from Seabiscuit still existed – an unlikely proposition since he died in 1947 and is buried in an undisclosed grave at Ridgewood Ranch in Northern California. 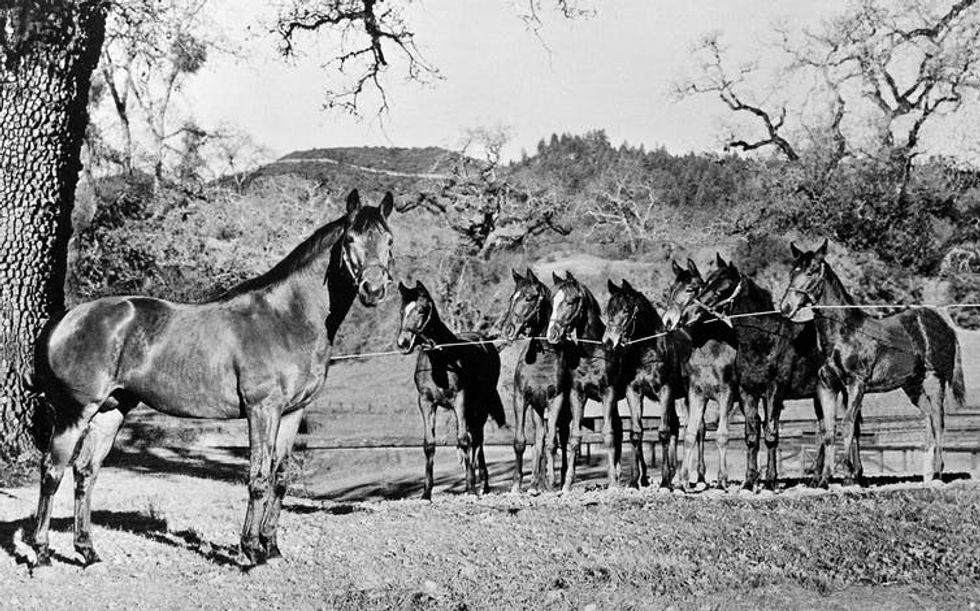 Seabiscuit as a retired 7-year-old, with some of his offspring at Ridgewood Ranch in California.

During a group phone call between me, Jacqueline and Michael Howard, the great-grandson of Seabiscuit’s owner, he mentioned that Seabiscuit’s hooves had been removed and preserved after the champion died. Now this piqued my interest; my lab group has had great success extracting reasonably intact DNA from ancient bone samples. 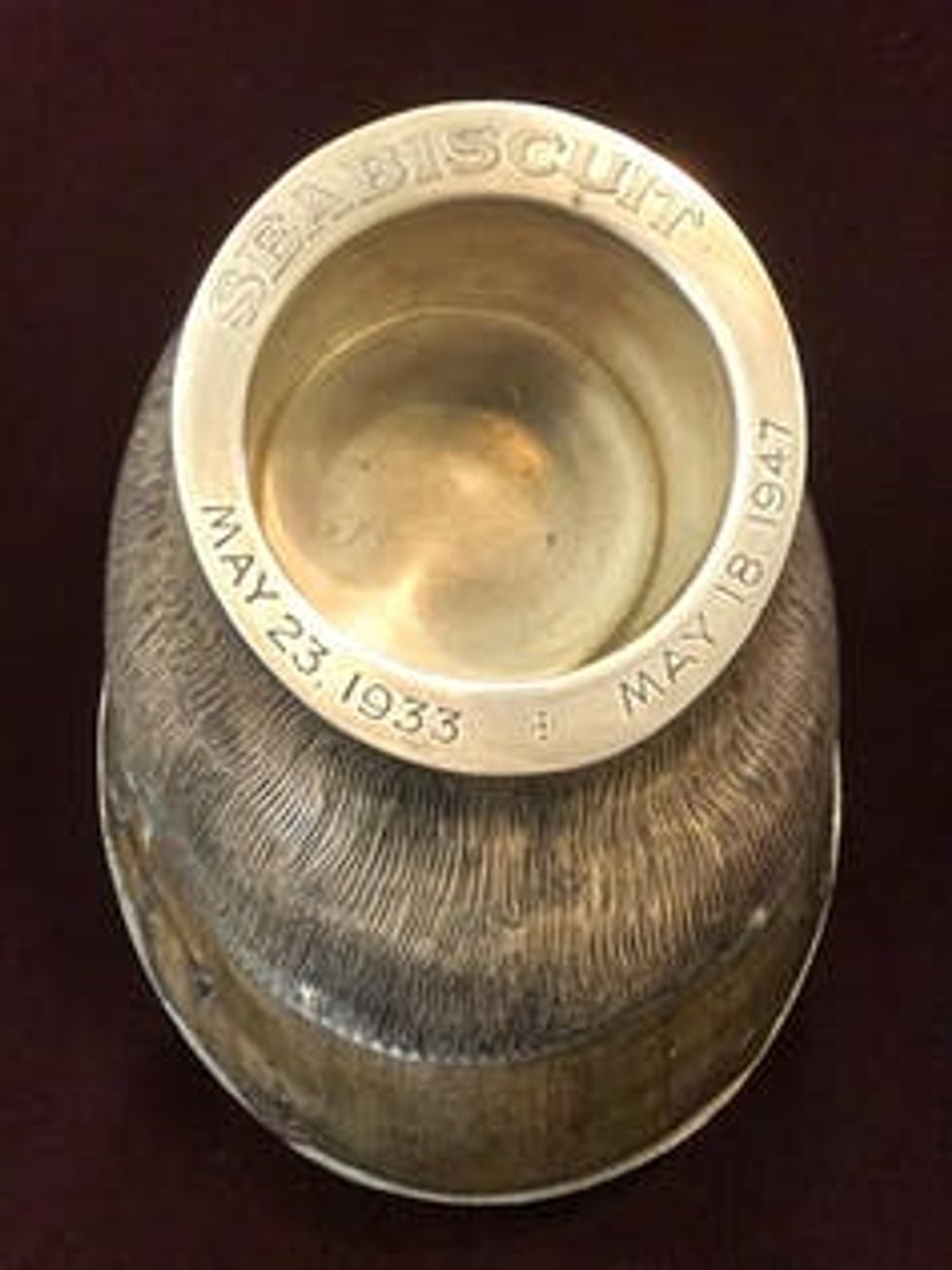 One of Seabiscuit’s silvered hooves. The lower portion is the hoof wall, while the top and middle sections are silver.

It turned out that Seabiscuit’s silvered hooves – think of a baby’s booties coated in metal – were on display at the California Thoroughbred Foundation. Although not common practice today, historically it was customary to remove the hooves of a champion racehorse as a keepsake prior to burial. The silvered hooves often served as decorative mementos, sometimes even being used to hold cigarettes and matches.

When our lab received two of Seabiscuit’s hooves, though, the most noticeable thing about them was how deteriorated they were. A great portion of each hoof had pulled away from the silver shoe. The best word to describe them was ragged. And the hollowed out top was so deep into each hoof, we were afraid the bones had been completely removed from the samples during the silvering process. We decided to push forward and see what we could find. 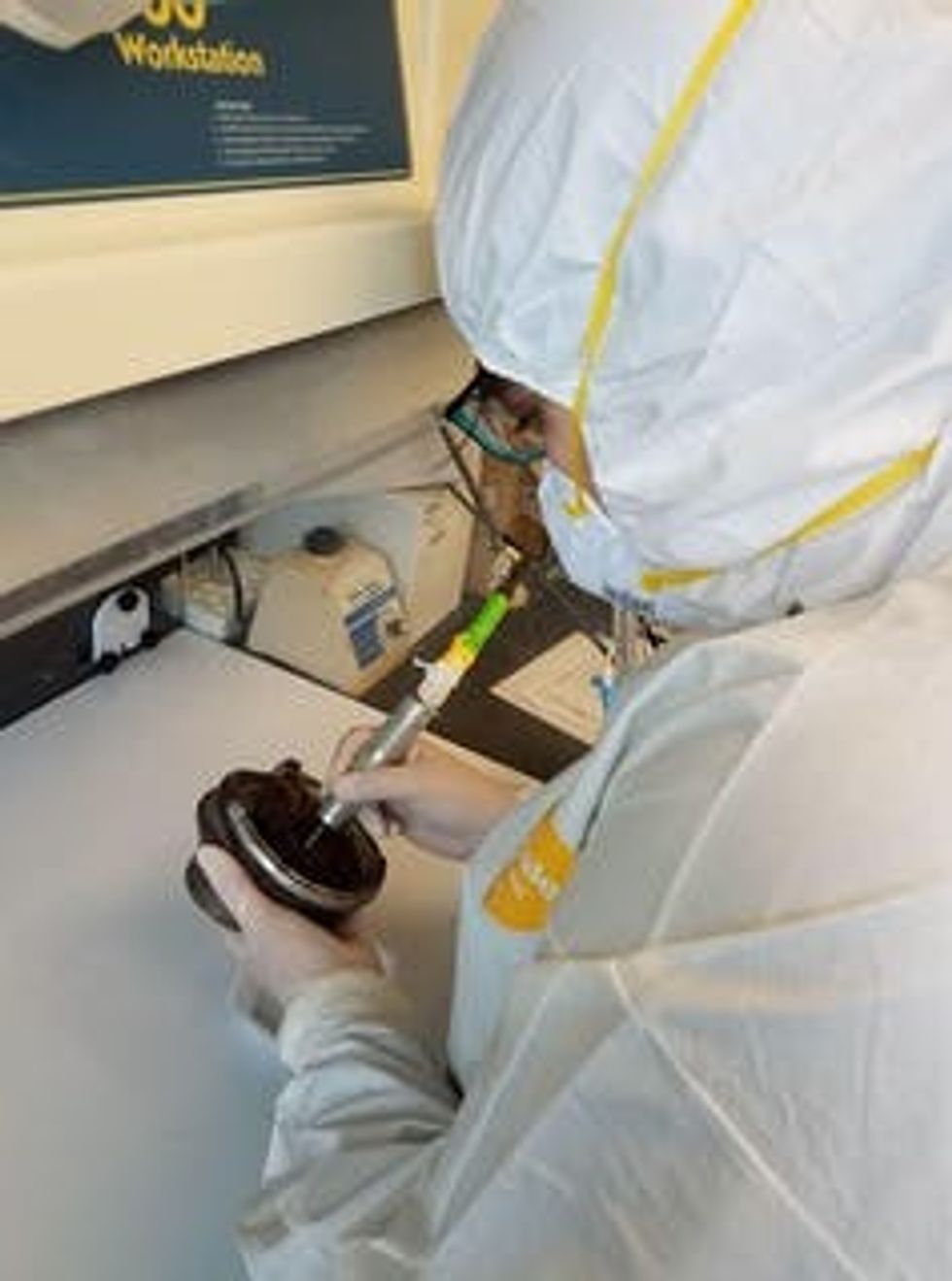 Kate DeRosa extracts what she can from the bottom of the hoof.

Ph.D. student Kate DeRosa, with assistance from Andy Merriwether, who directs the Ancient DNA and Forensic Laboratory on campus, drilled into the hooves, hoping to find what’s called the coffin bone, the bottom-most bone inside of an equine hoof capsule. As Kate drilled, the resulting powder turned from dark brown, signifying it was a non-bone substance, to white, suggesting the coffin bones were indeed still there.

Our team went on to extract DNA from the powdered bone. The nuclear DNA was somewhat degraded, which didn’t surprise us given the age of the samples and the harsh chemical treatment the hooves had been exposed to during the silvering process. The mitochondrial DNA, though, was intact. We used it to verify the maternal lineage of the samples and confirm that the hooves were indeed from Seabiscuit.

Although the nuclear DNA from the hoof sample was not intact, Kate was still able to partially sequence specific genes associated with optimal racing distance in thoroughbreds. We found that Seabiscuit had gene variants that are often found in horses that are good distance runners. Interestingly, though, underlying this were variants in minor racing genes that are usually found in sprinting horses.

This somewhat rare genetic combination of stamina and speed seems to be reflected in the champion’s race record, as he won races from as short as 5 furlongs (sprint) to as long as 1¼ miles (distance). Further, horses of today that we’ve identified with this genotype tend to be late bloomers, winning their first race almost three months later, on average, than horses with a genotype associated with precocity. Sounds like Seabiscuit’s race record: He didn’t become a true racing star until his 4-year-old racing season. 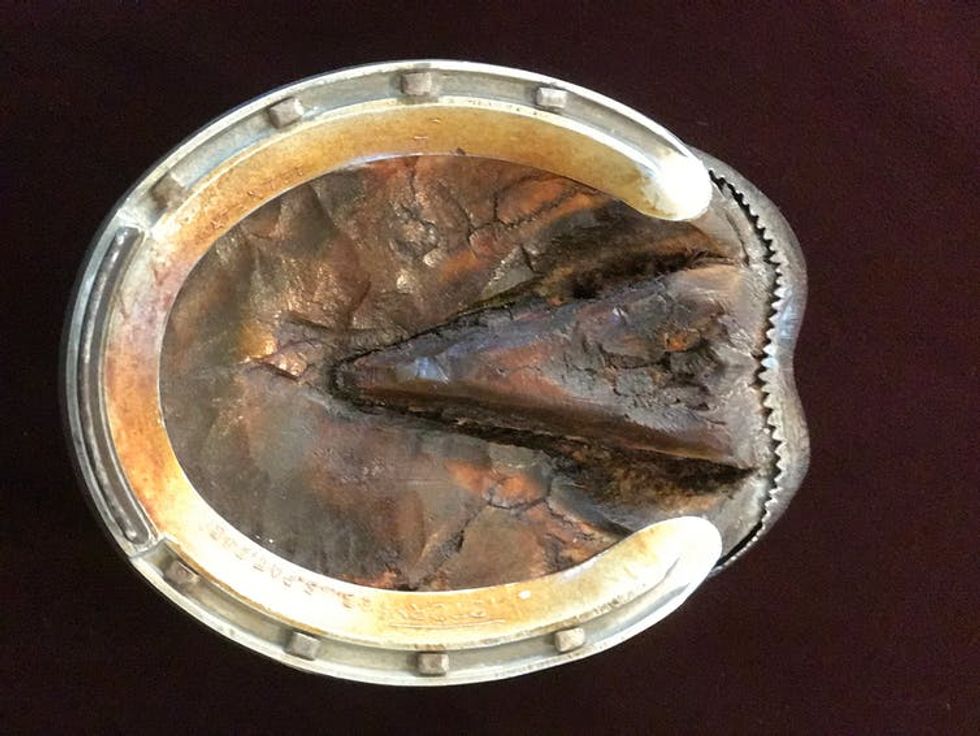 The bottom of Seabiscuit’s silvered hoof, pre-drilling. The two drill sites were on either side of the point of the triangular ‘frog,’ which is analogous to a person’s fingertip.

Our lab will continue to examine Seabiscuit’s genome, focusing on genes linked to other physical attributes, as well as genes that control temperament traits such as aggression, curiosity and trainability. Perhaps Seabiscuit had variants in these behavioral genes that gave him the incredible desire to win despite his less-than-ideal physical attributes.

Through this study, the collaborating partners hope to get an idea of what genetic components made Seabiscuit the great racehorse that he was. We know that racing thoroughbreds in the early 20th century looked quite different than today’s horses, so it will be interesting to see if Seabiscuit’s DNA is noticeably different than that of his modern counterparts. For now, the prospect of cloning Seabiscuit is not possible, due to the insufficient quantity and poor quality of the nuclear DNA we could recover.