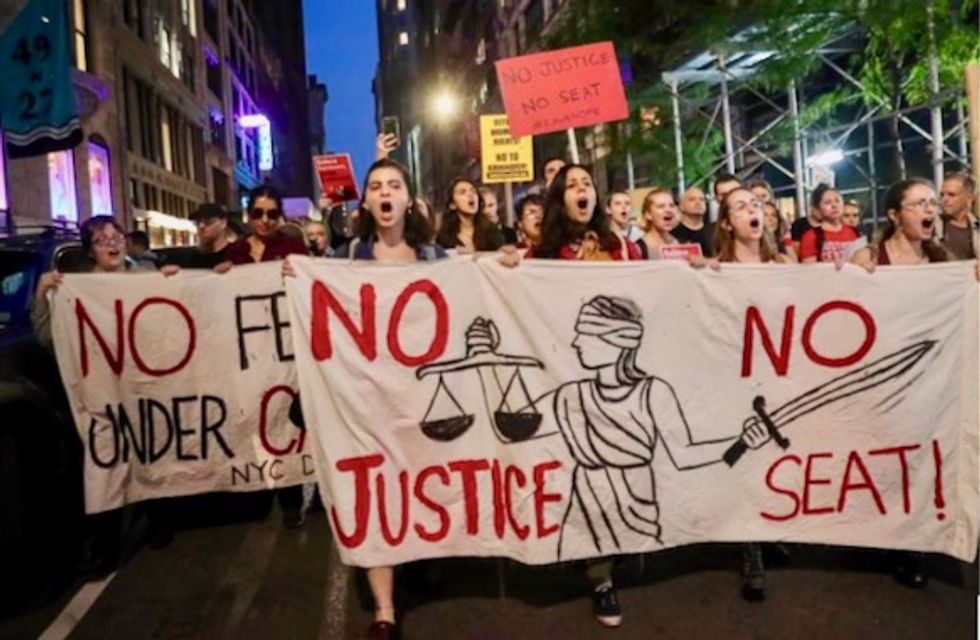 U.S. Senate Majority Leader Mitch McConnell struggled to get through a terminal at a Washington airport on Monday as protesters confronted him, asking if he believed sexual assault allegations against Supreme Court nominee Brett Kavanaugh.

“How many stories of sexual violence do you need to hear in order to believe women?” one woman asked McConnell, a Republican, as he walked toward an escalator at Reagan National Airport, his aides trying to clear his path, according to video circulated on social media.

For some key Republican U.S. senators, no matter where they appeared in the country, newly emboldened protesters, mostly women, were there as well, after being credited with helping force at least a week’s delay in the confirmation vote for Kavanaugh.

President Donald Trump nominated Kavanaugh in July to succeed retiring Justice Anthony Kennedy on the top U.S. court. Kavanaugh’s confirmation to the lifetime post would cement the conservative grip on the Supreme Court.

The activists behind the protests said they planned to keep up the effort as the FBI investigates accusations of sexual misconduct by Kavanaugh when he was in high school and college.

Kavanaugh denies the allegations and has accused Democrats of a political “hit.”

The allegations against Kavanaugh come against the backdrop of the #MeToo movement against sexual harassment and assault that has toppled a succession of powerful men.

“We are still here, still outraged,” said Rachel Carmon, chief operation officer of Women’s March. The group is planning a “Cancel Kavanaugh” march on Thursday beginning at the federal appeals court in Washington on which he sits.

Hundreds of protesters rallied on Monday at Boston’s City Hall where Senator Jeff Flake was speaking at a conference, their chants audible in the distance as the Arizona Republican was asked about his dramatic decision last week to press for an FBI investigation into the allegations against Kavanaugh.

Two women had challenged him on Friday as he tried to close a Senate elevator door, confronting him with details of their own experiences of sexual assault and castigating him for announcing he would vote for Kavanaugh in the Senate Judiciary Committee.

Flake acknowledged on Monday that the incident, aired widely, helped lead to his request at the subsequent committee hearing that an FBI probe be conducted before a full Senate vote on Kavanaugh. Trump, who had previously rebuffed Democratic demands for such an investigation, granted the request.

Flake, a frequent critic of Trump, is not seeking re-election this year.

Flake’s move came a day after a jarring Senate hearing on Thursday in which university professor Christine Blasey Ford accused Kavanaugh of sexually assaulting her in 1982 when both were high school students in Maryland.

Two other women besides Ford have accused Kavanaugh of sexual misconduct while he was a young man. He denounced the allegations during his testimony as a political smear driven by Democrats.

Protesters have also focused on two other senators who are undecided on Kavanaugh - moderate Republicans Susan Collins of Maine and Lisa Murkowski of Alaska.

Rallies are being organized every day this week outside Collins’ district office in Portland, Maine, said Amy Halsted, co-director of Maine’s People’s Alliance.

Starting on Tuesday, scores of protesters also planned to deliver morning cups of coffee to Senate offices with messages from victims of sexual assault to encourage them to “wake up to the truth,” the Center for Popular Democracy advocacy group said.

Demand Justice, a new group focused on fighting efforts to tilt the U.S. judiciary to the right, said it was spending $120,000 to air a television ad in Washington, Alaska, Maine and the San Francisco area, where Ford lives.

The ad, which is called: “We believe survivors,” shows women watching Ford’s testimony on televisions and computer screens with concern and will call out Collins and Murkowski by name in their home states, asking if they believe Ford.