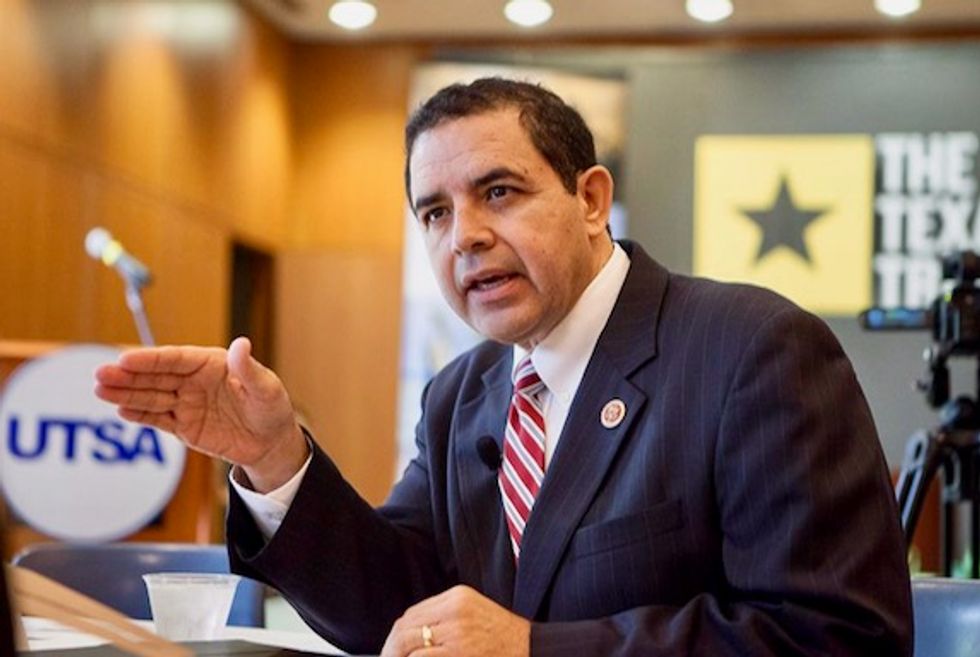 A former senior aide to Democratic U.S. Rep. Henry Cuellar has filed a complaint with a special congressional office, claiming that she was fired, in violation of federal law, for being pregnant.

Kristie Small submitted a request for counseling Monday with the Office of Compliance, the body that handles discrimination and harassment complaints in Congress, after she was terminated as Cuellar’s acting chief of staff last week.

Small said that when she asked the Texas lawmaker to meet to discuss plans for her maternity leave, he told her she was on a 90-day “probation period” and set two new markers for her performance that he later claimed she had failed to meet.

“I knew I was doing an excellent job,” Small said Wednesday in a phone interview. “All of this started happening in response to my maternity-leave email. It’s 100 percent clear to me that had I not been pregnant, I would still be in this job.”

Cuellar’s office released a statement defending Small’s firing but declining to address her claims in detail.

“The Office of Representative Cuellar considers internal personnel matters confidential and will not comment publicly on Ms. Small’s allegations at this time, except to say that the office values its employees and conducts all personnel matters in compliance with the congressional Accountability Act and applicable House Rules. All actions taken with respect to Ms. Small’s employment were in compliance with the law and House Rules,” the statement said.

The Pregnancy Discrimination Act, according to the Equal Employment Opportunity Commission, says a woman “cannot be fired, rejected for a job or promotion, given lesser assignments, or forced to take leave” because of her pregnancy.

The dispute highlights the latest claim of gender-related discrimination on Capitol Hill since a series of explosive #MeToo allegations raised concerns about male lawmakers’ treatment of female aides. Eight House members have resigned or chosen not to seek reelection because of employment or sexual misconduct scandals since last October.

Small, who is in her third trimester of pregnancy, must undergo a lengthy counseling and mediation process through the Office of Compliance before she is permitted to file a lawsuit. The system was criticized in the wake of the #MeToo movement as biased toward lawmakers over staff. The House and Senate failed to agree on a bill to overhaul the system before recessing for the midterm elections.

Sara Blackwell, a Florida-based employment attorney who is representing Small, said that a counselor from the Office of Compliance responded to the initial complaint and that they are scheduling an interview for next week.

“The average American doesn’t know about this secret process that happens in Congress,” Blackwell said. “We want people to know that this is happening, that this is what Kristie went through and that her only recourse is through this secretive, unfair system, when there is a bill pending that could change everything.”

Before joining Cuellar’s office, Small worked for more than 13 years as an aide to Rep. Robert A. Brady (D-Pa.), first in his personal office and then as a professional staff member on the House Administration Committee. She asserted she never had “issues, problems, write-ups or terminations” in her previous jobs. Brady’s spokesmen did not immediately respond to requests for comment.

Cuellar, a co-chairman of the Blue Dog Coalition of moderate Democrats, has represented South Texas in the House since 2005. He has no Republican opponent this election cycle and is expected to be reelected easily Nov. 6.

An analysis released in March by LegiStorm found that Cuellar had the House’s fifth-highest level of staff turnover between 2001 and 2016. He declined Wednesday to comment on the report but had previously attributed the high turnover to his staff’s tendency to excel and advance to other jobs.

Small, 37, said she joined Cuellar’s office June 1 and after learning she was pregnant, emailed him about planning for her maternity leave.

Cuellar replied to the Aug. 8 email by telling Small that she was under probation that they needed to discuss, she said. Small said Cuellar had never raised concerns about her performance before then.

“I was very confused. I had never been told there was a 90-day probation period. When I asked other staffers, no one else had ever had this type of discussion with him,” she said.

Cuellar, through his office, declined to say whether he conducts a probationary period for all new employees.

Small said that they met to discuss the probation period Sept. 5 and that Cuellar praised her work while asking her to help the office’s media team and learn more about his legislative positions. She said he told her they would revisit the issues in 30 days.

Small said she had been “working on those two things already” and devoted substantial effort after their conversation to fulfilling his requests.

“I know I did a good job,” she said. “It was an extremely difficult work environment, but I didn’t let that bother me. I’m not afraid of hard work or a tough boss.”

Small said Cuellar called her last Tuesday to say that she had failed to adequately address his concerns and that she could either resign or be fired.

She said her termination has put her family’s finances in jeopardy and raised the possibility that she will have to find new doctors at a crucial stage in her pregnancy.

“I don’t want other women to have to face this,” she said. “If I can help change employers’ minds on how they treat pregnancy, that’s my goal.”