Georgia’s gubernatorial race could be a bellwether for Democrats nationally

Democrats haven’t won a major statewide office in Georgia since 2000, but this year’s gubernatorial race in the state is a tossup.

As a political scientist who studies elections and lives in Georgia, I’ve been watching this race closely.

Polls have the Republican candidate, Georgia Secretary of State Brian Kemp, and the Democratic candidate, former State House of Representatives Minority Leader Stacey Abrams, in a virtual dead heat. Political forecasters at FiveThirtyEight estimate this is the closest statewide race in the nation.

The 2018 gubernatorial election is Democrats’ best chance in decades to pick up a Georgia win.

From the outside, Georgia appears to be a solidly red state, but underneath the surface it’s pretty closely divided. There have been 10 races in Georgia for major statewide offices – that includes senator and governor – since 2000. Democrats have lost all of those races, but based on data I’ve compiled the Democratic candidate has won 45 percent of the vote five times, and 47 percent of the vote three times. Republicans have won an average of 52.9 percent of the vote. This is a very low average margin of victory for a state in which one party wins so consistently.

Each candidate in this year’s gubernatorial race has a significant electoral weakness.

Kemp is a far-right conservative who won the primary election with a campaign grounded in anti-immigrant and pro-gun messages, and Donald Trump’s endorsement. He’s facing a strong national Democratic tide brought on by President Trump’s lagging popularity and high levels of enthusiasm among Democratic voters.

Abrams is an African-American woman running for office, and even in 2018, minority and women candidates have a harder time winning elections.

In both cases, these qualities may hurt the candidate in the general election by dampening voter enthusiasm.

Kemp made national headlines in April and May during the Republican primary with a campaign designed to win over the most conservative voters in Georgia.

Kemp released an ad in which he had a conversation with a teenage boy while pointing a gun at him as an illustration of how committed he is to upholding the Second Amendment. In another ad he boasted about “round[ing] up criminal illegal aliens” in his own pickup truck. 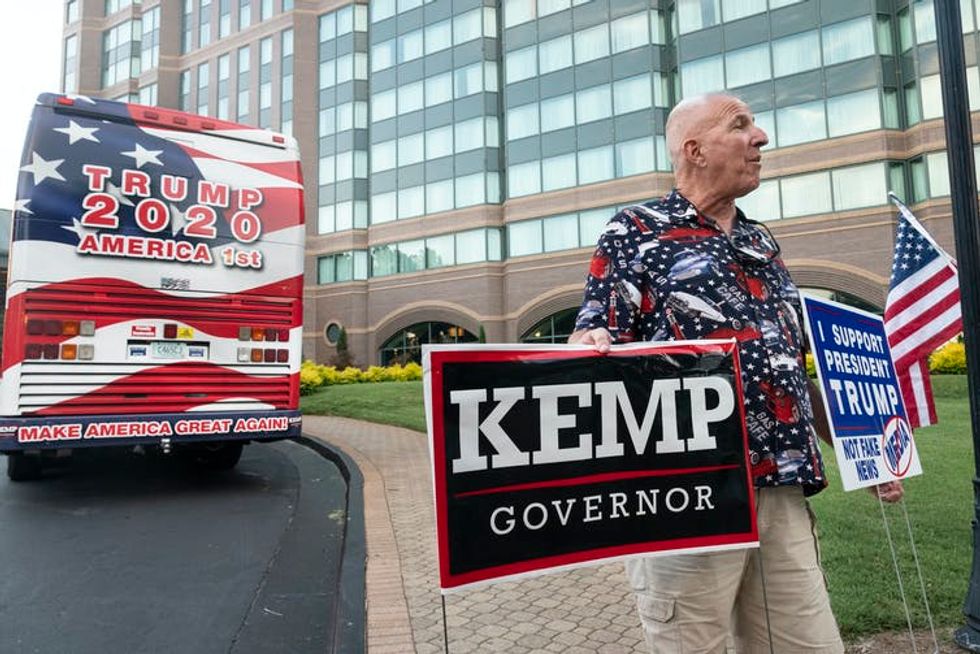 This conservative rhetoric is well-designed to win a Republican primary, because the people who vote in primary elections tend to prefer strongly ideological candidates. Kemp easily defeated his more moderate opponent, Casey Cagel, who lamented that the primary had devolved into a contest over “who had the biggest gun, who had the biggest truck, and who could be the craziest.”

A significant body of research suggests that the conservative image Kemp built up in the primary will not serve him well in the general election. People who vote in general elections tend to be more ideologically moderate than primary voters.

All of this means that in general elections, moderates have an advantage. In those contests, ideologically extreme party nominees win a significantly smaller share of the vote than moderate nominees.

Candidates who win a primary with a strong ideological campaign might try to moderate their stances for the general election, but that usually doesn’t work very well. Voters may not believe the switch in tone is genuine, or the candidate may have already alienated core voters in the primary.

In contrast to Kemp’s efforts to position himself as a strong conservative, Stacey Abrams tends to focus on traditional Democratic issues such as education and health care. However, she faces a different set of challenges in the race.

Abrams is trying to become the first female African-American governor of any state. Unfortunately, both Abrams’ race and her gender will play a role in how voters perceive her, even in 2018. And neither of those factors will play to her favor.

Abrams is counting to make up some of these electoral losses by focusing her efforts on stimulating turnout among Georgia’s nearly 2 million black voters in November, but there is little evidence that minority candidates, in and of themselves, stimulate minority turnout. Nonetheless, some call Abrams’ efforts, along with those of other African-American candidates pursuing a similar strategy in other states, a model for the democratic party to follow nationally.

Female candidates are subject to similar types of scrutiny on the campaign trail. When voters evaluate candidates for office, their opinions are strongly influenced by gender stereotypes. Women are perceived as being more warm and compassionate, while men are perceived as being more assertive and competent. In general, the traits many people tend to associate with good leaders are traits voters also associate with men and masculinity.

As a result, many voters – both male and female – implicitly assume men in general are more competent than women are. These stereotypes can directly influence who voters vote for, as voters tend to prefer candidates who display male traits.

Black women have to deal with both sets of stereotypes, which creates an even higher bar to clear for women of color who run for office.

This fall, the Georgia election is likely to come down to which candidate can best overcome these significant electoral disadvantages.

Will Kemp be able – or even try – to expand his appeal beyond the most conservative elements of the Republican Party? Will Abrams be able to appeal to moderate whites who might never have voted for an African-American before? Whichever candidate can better address their specific challenge is likely to be the next governor of Georgia.

The election may have national consequences as well. Right now Georgia isn’t a true swing state – Republicans have a small but very reliable edge here. If Abrams can break through and win the state, it might signal a strong showing for Democrats nationally on Election Day. It might also be a bad sign for Republicans in future elections, as one of their more reliable states could be put into play.