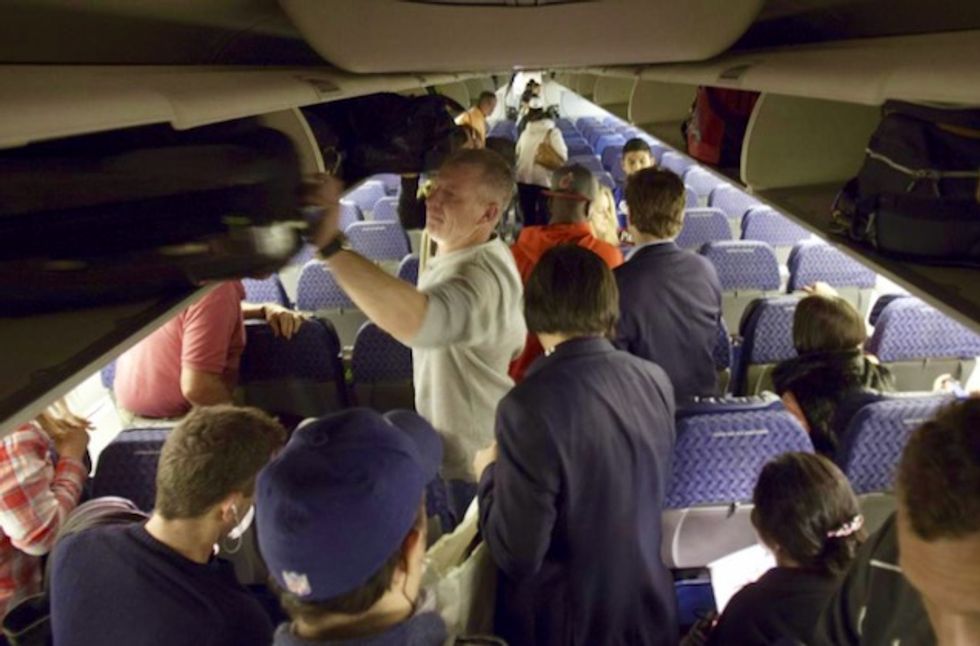 FILE PHOTO: A passenger removes his luggage from an overhead bin on a flight after arriving in New York December 10, 2013. REUTERS/Carlo Allegri

A bill that will regulate minimum seat size on U.S. passenger airplanes for the first time is unlikely to lead to more leg or elbow room for cramped flyers, airline consultants said.

The U.S. Senate is taking up on Monday the Federal Aviation Administration (FAA) reauthorization bill, which funds the agency for five years and sets other travel measures. Final passage is expected on Tuesday or Wednesday.

Current rules say airlines must be able to evacuate passengers within 90 seconds of any emergency and do not set specific requirements on seat size or the space between other seats. If passed, the new rules would require a minimum standard based on a safety review.

Currently, seat pitch - the distance from one seat back to the next - on low-cost carriers Spirit Airlines Inc and Frontier Airlines is among the industry’s tightest at 28 inches (71 cm). The average for other mainline economy seats is 31 inches.

But because the FAA has previously approved operations such as Spirit and Frontier’s, it is unlikely to now call the 28-pitch unsafe, said Samuel Engel, vice president of aviation at consulting group ICF.

“It’s a mistake to imagine this legislation will have a big impact on airlines or consumers,” Engel told Reuters.

In July, the FAA said in response to a petition filed with a federal appeals court that it would not regulate seat size.

Airlines’ margins could suffer if they had to reconfigure planes to create more space.

Frontier declined to comment and Spirit did not reply.

The FAA could decide the rules only apply to future aircraft and would have at least until late 2019 to write the rules, officials said.

American Airlines Group Inc and United Airlines are configuring many of their newest aircraft at 30 inches, while adding premium economy seats at 34 inches.

Among other measures in the FAA reauthorization, airlines must increase flight attendants’ required rest time, which may create a need for more cabin crew and reduce airlines’ flexibility to recover from delayed flights, ICF’s Engel noted.

The bill also requires the FAA to establish domestic landing and takeoff standards on noise for supersonic jets, a move that could kickstart the fledgling U.S. supersonic jet industry despite resistance by European nations that want tough rules on noise.

Reporting by Tracy Rucinski in Chicago and David Shepardson in Washington; Editing by Matthew Lewis