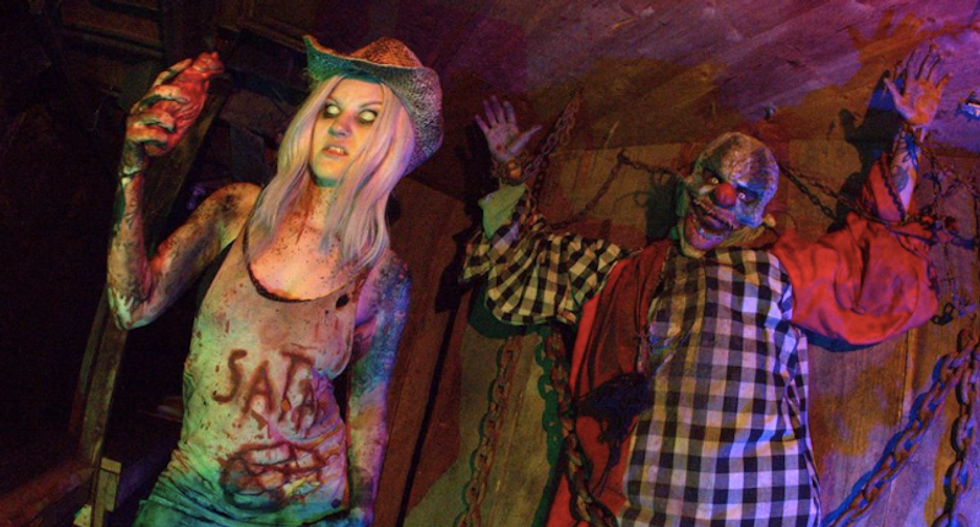 An Ohio haunted house went ahead with a planned "Swastika Saturday" promotion after a gunman killed 11 worshipers in a Pittsburgh synagogue.

Hustle Hoochie, a longtime haunted house in Pataskala, went ahead with the promotion Saturday despite calls to cancel and protests outside the event, reported WBNS-TV.

Organizers said the event, which offers free admission to anyone wearing a "haunted hoodie" or sporting a Dead Acres logo tattoo, is a 28-year tradition -- but they were forced to issue apologies after facing backlash this year.

"We screwed up big time," organizers wrote on Facebook. "On behalf of the entire Haunted Hoochie staff, we first and foremost extend our sincerest condolences to the families affected by the tragedy in Pittsburgh, and the Jewish communities of the area.

Second, we will in no way tolerate any form of hatred on our grounds, from our staff, or from our guests. This means that certain costumes or themes may be deemed inappropriate and you will be denied admission or asked to leave the grounds."

The Pittsburgh band Only Flesh had been scheduled to perform but canceled after the massacre.

“Whether it was done for shock factor, racism or just plain ignorance, we cannot promote that kind of message,” said the band's singer, Revina Lower. “I personally live 10 minutes from the synagogue that was attacked, and I cannot even try to understand what the families and friends of the murdered are going through. We need to stand for them."

"The Haunted Hoochie is a place to escape the true evil in the world through the magic of Halloween theater- NOT perpetuate real evil," organizers said.

"We show you the darkest, sickest, depraved parts of the world we all live in," the said in another Facebook post. "We definitely aren't nazi's. Its a haunted house, its all about the horrors we face here on earth. We also don't condone murder, torture, suicide by shotgun, or birth by sledge hammer. We are here to shock and awe and terrify. It does make us sad that this country is being divided against and killing each other. Don't fall for the illusion that one race/ religion is better than another."