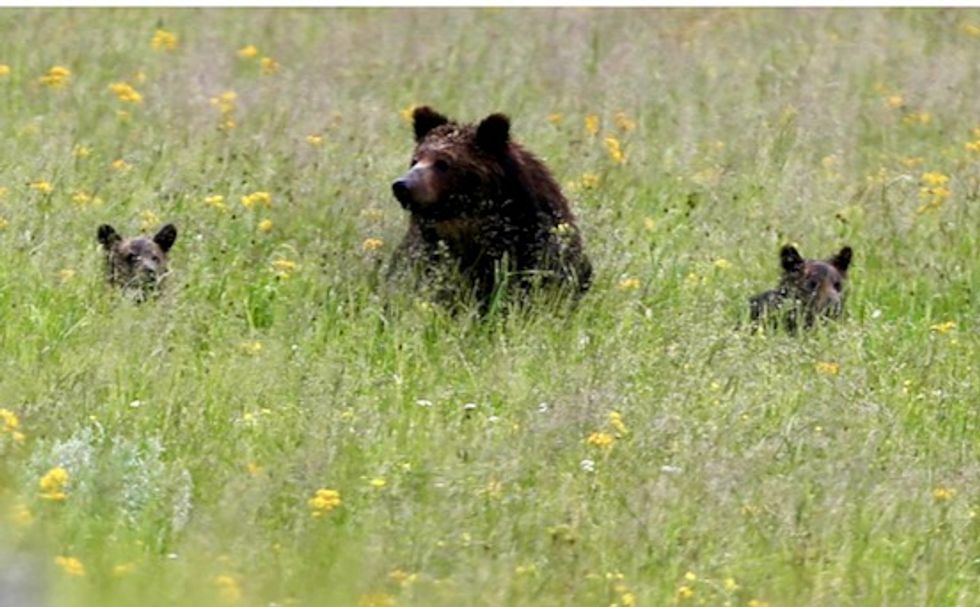 FILE PHOTO: A grizzly bear and her two cubs is seen on a field at Yellowstone National Park in Wyoming, United States, July 6, 2015. REUTERS/Jim Urquhart/File Photo

An 18-year-old man was killed by a grizzly bear while working at a silver mine in Alaska on Monday, state troopers said, marking the second fatal mauling in the largest U.S. state this year.

The victim, identified as Anthony David Montoya of Hollis, Oklahoma, had been working at a drill site on the edge of the Hecla Greens Creek Mine property in southeastern Alaska when he was attacked, the Alaska State Troopers said.

He was fatally mauled in an encounter with a mother grizzly and her two cubs, a trooper spokeswoman said.

The Hecla Greens Creek Mine, one of the world’s largest silver producers, is located about 18 miles (29 km) south of Juneau on Admiralty Island.

The island is famous for its coastal grizzlies, also known locally as brown bears, and has the densest population, or most bears per square mile, in North America.

The mine’s operator, an Alaska-based subsidiary of Idaho-based Hecla Mining Company, said the attack site was remote, accessible only by helicopter and away from the main mine operations.

Until Monday, there had never been an injury-causing bear attack in the nearly 30 years that the mine has been in operation, said Mike Satre, Hecla Greens Creek’s manager of government and community relations.

“We have lots of bears on Admiralty Island. We work in and around them on a regular basis. We have certainly had encounters, but we have never had an encounter that resulted in an injury to our personnel,” Satre said.

The mine’s bear-safety program includes training that all workers, contractors and visitors must complete before coming to the site, Satre said.

All three bears were killed before troopers arrived, officials said.

Montoya’s body will be sent to the state medical examiner’s office for an autopsy, troopers said, adding it was unclear whether Montoya had been attacked by just the mother bear or by the cubs as well.

Monday’s fatal mauling was the second in Alaska this year. In June, a grizzly killed a man hiking in Eagle River, a suburb of Anchorage.

Reporting by Yereth Rosen in Anchorage; Editing by Dan Whitcomb and Darren Schuettler