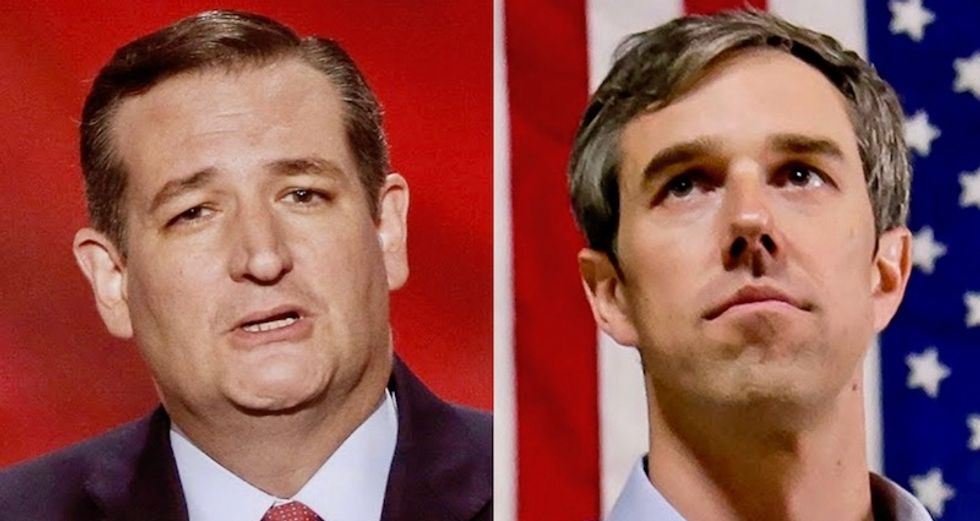 For all the sharp differences in their U.S. Senate race, both Ted Cruz and Beto O'Rourke are sharing some common ground with days to go: Both see promise for their campaigns in massive early voting turnout.

As of Friday, more Texans had voted early in the 30 counties where most registered voters live than they had for the entire two-week early vote period during the last midterm election in 2014. Several large counties are on track to surpass early voting turnout during the 2012 presidential election.

Campaigning Saturday in two of the state's biggest metropolitan areas, Cruz and O'Rourke were brimming with optimism as they discussed the numbers.

"I am very encouraged by the early voting numbers," Cruz told reporters after a campaign stop here in this Houston suburb. "I have always said if Texans show up and vote, we are going to have a very good election. Texans are showing up to vote."

"Our biggest threat politically was always complacency, and I think that the last two months have been pivotal in this election" for defining the choice before voters, Cruz added. "I think we have seen a renewed sense of urgency among Texans, and I think that's reflected in the early voting numbers."

Since early voting began Monday, O'Rourke has been holding dozens of "Vote with Beto" events where he meets supporters near a polling location and rallies them before they head off to vote. At almost every stop in recent days, he has touted the increased early voting turnout in the area and throughout the state as a sign of a successful campaign.

"The people of Dallas County, like the people of Texas throughout this state and all 253 other counties, are taking our hope and our promise and the potential of this country, and you are putting it into action," O'Rourke told supporters Saturday morning in Dallas County, where the number of ballots cast in the first five days of early voting was more than triple that of the 2014 midterm elections.

Derek Ryan, a GOP data consultant who previously worked for the state party, said there are a couple metrics among the 15 counties that could be heartening each candidate. In Ryan's analysis, Republican primary voters currently have a 90,000-vote advantage over their Democratic counterparts in early voting — a margin that is "definitely going to help Cruz out considerably," Ryan said.

O'Rourke, meanwhile, could be boosted by early voters who have not voted in a general or primary election over the last eight years — currently 8.5 percent versus 5 percent for the entire 2014 period, according to Ryan's analysis.

"The campaigns are seeing the same numbers that we are," Ryan said. "Cruz is probably focusing on these primary voters. Beto’s probably optimistic about the ones that don’t have any primary election history."

On the Democratic side, the state party has been sending out daily news releases showing early vote increases over 2014 in a dozen of the state's biggest counties. On Thursday alone, the increases ranged from 107 percent in Hidalgo County to 326 percent in O'Rourke's home of El Paso County.

"It’s clear," state party Chairman Gilberto Hinojosa said in a statement. "Texans are demanding change and ready to have their voice heard."

Cruz and O'Rourke were campaigning across the state Saturday in the wake of the Pittsburgh synagogue shooting that left at least 11 people dead. Both candidates paused their campaigns to recognize the tragedy, with O'Rourke releasing a video sending his condolences to the victims and their families and Cruz opening his Richmond rally with a moment of silence for those killed by a gunman the senator described as "a cowardly, bigoted racist."

"There should be no place in our nation for that kind of evil, cowardly hatred," Cruz said after the moment of silence.

The synagogue shooting came the day after a Florida man — and vocal supporter of President Donald Trump — was arrested and charged with sending pipe bombs to a number of prominent Democrats. During an afternoon stop in DeSoto, O'Rourke referenced the shooting and bombs while discussing the "very real threat of political violence" in the country at the moment and the need to for national unity now more than ever.

"This idea that we can peacefully, nonviolently resolve our differences, pursue our goals, live up to the promise and the potential of this country — we’re being tested unlike any other time that I know of," O'Rourke said.

Asked after the Richmond rally whether the president should be advised to tone down his rhetoric, Cruz told reporters he has "long said that all of us should treat each other decency, with civility and with respect." Pressed on the president's responsibility, Cruz criticized the media.

"I will say it seems the only story many in the press want to write, whatever happens, is to attack the president because of it," Cruz said. "The people of Texas are much less interested in the never-ending attacks on the president of the press than they are in the record-setting unemployment and the jobs that we’re seeing across the state of Texas."