50 dead as firefighters battle wildfires on two fronts in California 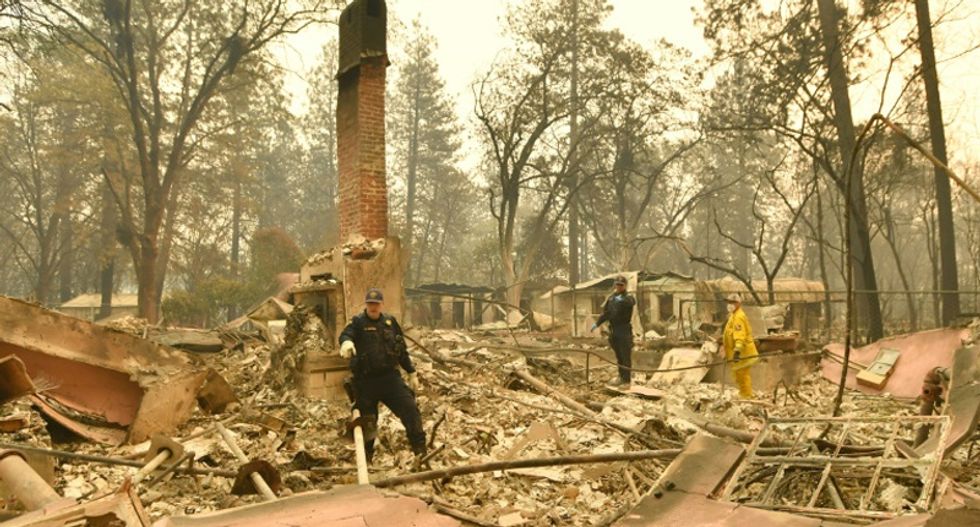 Thousands of firefighters battled blazes in northern and southern California on Tuesday as body recovery teams searched the remains of houses and charred cars for victims of the deadliest wildfire in the history of the US state.

At least 50 deaths have been reported statewide so far from the late-season wildfires, and with hundreds of people unaccounted for, the toll is likely to rise.

Most of the fatalities have been caused by the so-called "Camp Fire" in and around the town of Paradise, population 26,000, in the foothills of the Sierra Nevada mountains about 80 miles (130 kilometers) north of the capital Sacramento.

"Today an additional six human remains were recovered, which brings the total to 48. All six of those remains were located in Paradise, and they were located within homes," Sheriff Kory Honea told a news conference.

Another two deaths have been reported from the "Woolsey Fire," north of Los Angeles.

Paradise, which is home to many retirees and has experienced an unusually dry fall, was virtually razed to the ground by the fast-moving "Camp Fire" blaze.

Residents have recounted harrowing tales of fleeing the fires on foot with little more than the clothes on their backs.

Others escaped by driving through tunnels of smoke and fire as flames licked at their vehicles on gridlocked roads dotted with abandoned cars.

Melissa Schuster, a member of the Paradise town council, told ABC News that the entire town "is a toxic wasteland right now."

"We have teams -- you know, coroner teams -- that have to go house to house and vehicle to vehicle," Schuster told ABC.

Butte County, where the blaze is located, has seen less than an inch of rainfall in more than 30 weeks.

The "Camp Fire" has destroyed some 7,600 homes and 260 commercial properties. Battling the blaze are more than 5,600 fire personnel, some from as far away as Washington state and Texas.

"We're starting to get a handle on this fire," said Captain Brian McGrath of the Ventura County Fire Department in an online briefing. "I'm not feeling nearly the amount of wind and it's a little bit cooler this morning."

The "Woolsey Fire" has destroyed 435 structures including the 100-year-old Paramount Ranch where HBO's "Westworld" and other popular television shows and movies were filmed. Cal Fire says it is threatening another 57,000 structures.

The fires have forced a quarter of a million people to flee their homes and seven evacuation shelters have been set up in Butte County, three of which are already full, according to the authorities.

On Monday, President Donald Trump -- at the request of state authorities -- declared that a "major disaster" exists in California.

The declaration provides for federal assistance to aid state firefighting and recovery efforts in the counties of Butte, Ventura and Los Angeles.

Trump had earlier earned the ire of state officials with a claim that "gross mismanagement" of forestry in the state was responsible for the damage.

The declaration provides for federal assistance to aid state firefighting and recovery efforts in the counties of Butte, Ventura and Los Angeles.

Trump had earlier earned the ire of state officials with a claim that "gross mismanagement" of forestry in the state was responsible for the damage.

California Governor Jerry Brown said he expects the fires could be worse in the years to come.

"Unfortunately, the best science is telling us that the dryness, warmth, drought, all those things, they're going to intensify," Brown said.

The "Woolsey Fire" on the southern end of the state has devoured mansions and mobile homes alike in the coastal town of Malibu.

Over the weekend, the "Woolsey Fire" engulfed parts of Thousand Oaks, where a Marine Corps veteran shot dead 12 people in a country music bar on Wednesday.

Among those who lost their homes was the pop star Miley Cyrus, who tweeted that her "house no longer stands but the memories shared with family & friends stand strong."