Battle for the Senate: Polls favor Democrats in key battleground races as control of Congress looms 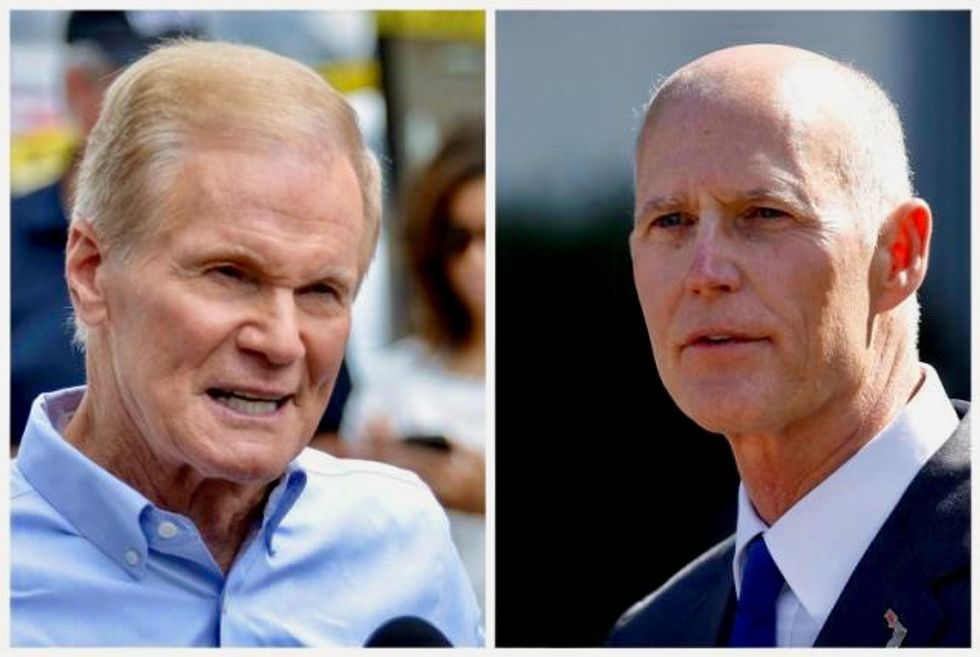 As Americans prepare for Election Day, final polls have brought a small wave of optimism for Democrats, suggesting the party's candidates are leading in key battleground races as control of the Senate looms.

In Florida, Democratic Sen. Bill Nelson is ahead of Gov. Rick Scott in two surveys published Monday. Nelson has a 7-point edge over the Sunshine State's Republican governor, according to a Quinnipiac University poll. He has a narrower, 4-point lead over Scott in the new NBC News/Marist poll.

Scott rejected the polls results on Monday. "We have big rallies, lots of energy on our side, so we're going to have a big win," he said during an appearance on Fox News. "There’s no blue wave. If anything there's a red wave." Sen. Marco Rubio (R-Fla.) and White House Press Secretary Sarah Sanders also made similar claims.

Meanwhile, in Missouri, Democratic Sen. Claire McCaskill has a slight advantage over her rival Josh Hawley, despite a surge in Republican enthusiasm in recent weeks that some believe could put a dent in Democratic hopes for a "blue wave." McCaskill holds a three-point lead over Hawley — 47 percent to 44 percent among registered voters, with third-party candidates capturing nominal support — according to an NBC News/Marist poll published Monday.

Missouri does not have early voting, and officials are bracing for voter turnout in Tuesday's midterm to be the highest in more than two decades. In an attempt to boost Hawley, Trump will host his closing rally of the midterm season Monday night in the Show-Me State in the final hours before voters head to the polls. Fox News primetime host Sean Hannity and conservative radio host Rush Limbaugh will join him as "special guests."

Before heading to Missouri, Trump will also visit Indiana to campaign for Republican Senate candidate Mike Braun, who is locked in a dead heat against Democratic Sen. Joe Donnelly in the Hoosier State. The current Real Clear Politics polling average shows Donnelly with a lead of just 0.4 percentage points.

Given the Republican Party's diminishing prospects of retaining control of the House of Representatives, the president has devoted his final campaign push to helping Republican Senate candidates defend their majority in Congress' upper chamber. The president's Indiana and Missouri rallies will be his second visit to each state in recent days, and he is banking on his popularity to play a pivotal role in those states, which he carried both by nearly 20 points in 2016.

Still, Democratic hopes of recapturing the Senate remain a possibility. Sen. Chris Van Hollen (Md.), the chairman of the Democratic Senatorial Campaign Committee, said on Sunday that, while Democrats have a "very narrow path" to gaining control of the upper chamber, the party's Senate prospects have improved over the course of the election cycle, despite a map that is more friendly to Republicans. Democrats appear to be solid favorites in Michigan, Ohio, Pennsylvania and Wisconsin — all states that Trump carried in 2016.

"I don't want to define a good night because what we see right now is a situation that is a whole lot better than anyone would have predicted 18 months ago, when Republicans were saying that they might win another eight seats and have a filibuster-proof majority in the United States Senate," Van Hollen said Sunday on Meet the Press. "No one's talking about that right now."

Nationally, polls diverged over whether the terrain has shifted for Democrats or Republicans in the final days of the 2018 election cycle. A CNN/SSRS poll released Monday showed Democrats with a 11-point lead over Republicans among registered voters on the generic congressional ballot, while a POLITICO/Morning Consult poll showed Democrats with only a slight advantage in the generic ballot — 43 to 40 percent among registered voters.