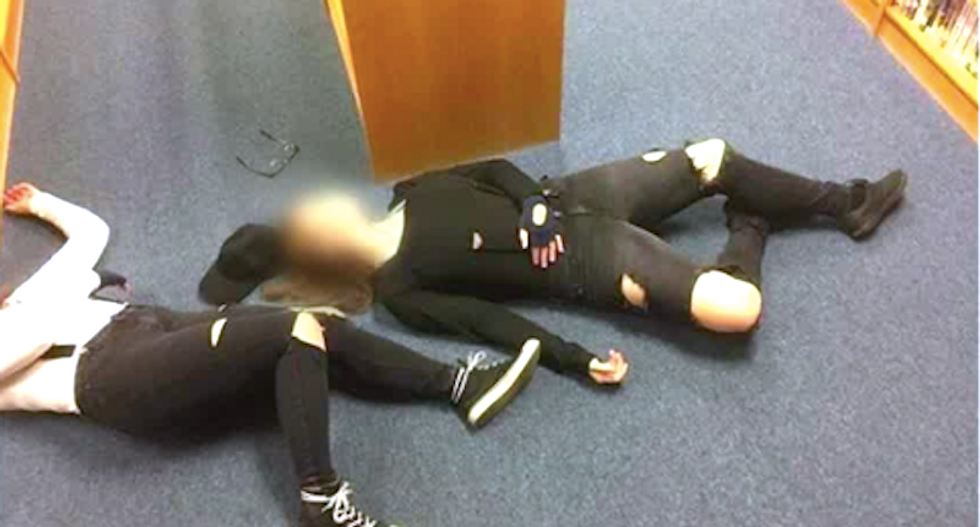 Two Kentucky girls were suspended for dressing up as the Columbine killers at school for Halloween.

The Adair County High School students wore costumes that resembled the clothing worn by Dylan Klebold and Eric Harris the day they killed 15 classmates and teachers at their Colorado high school, reported WHAS-TV.

The girls shared photos of themselves wearing the costumes and re-enacting scenes from the 1999 Columbine massacre, including the killers' suicide, posted alongside actual photos from the mass shooting.

"We take the situation very seriously and our personnel are continuing to investigate the facts and circumstances surrounding this matter," said school superintendent Pamela Stephens. "The students are currently suspended."

She didn't say how long the teens were suspended, but some parents said that punishment still wasn't enough.

"It's ridiculous," said parent Amy Tarter. "I think any child that does that should be expelled and any parents who [support] their child [doing that] should have charges brought against them."

"You worry every day about sending your kid to school, and now you have people joking about it," she added.

The father of one of the girls said she understands the Halloween costumes and social media posts were a mistake, but he said the school blew their actions out of proportion.

He added that the girls have received death threats.

Not all parents agreed the costumes could be perceived as a threat, but most were disturbed by them.

“Even though it’s fake," said resident Erin Pineur, "it’s something that could happen, and it’s very real."