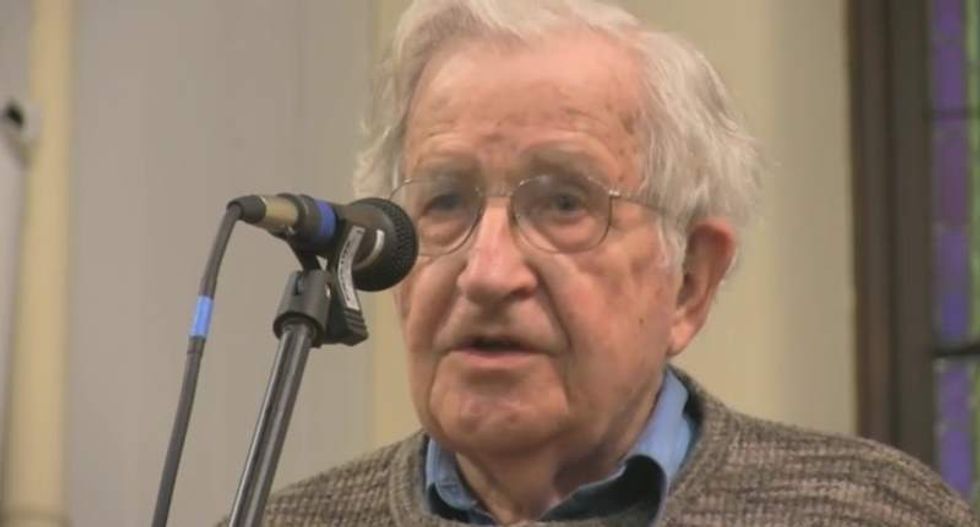 Linguist and long-time political gadfly Noam Chomsky argued in an interview Friday that President Donald Trump's poisonous and violent rhetoric fueling hatred in the United States has a deep lineage in the country — and also accentuates the country's role in an "alliance of reactionary and repressive states" worldwide.

Asked by Democracy Now's Amy Goodman to reflect on the recent anti-Semitic massacre in Pittsburgh at which 11 Jewish people were killed by a gunman, Chomsky, who was born in Philadelphia, noted that the hatred reflected what he saw in his youth — though it is less severe now.

"When I was a child, the threat that fascism might take over much of the world was not remote," he said. "That’s much worse than what we’re facing now. My own locality happened to be very anti-Semitic."

He continued: "What we’re now seeing is a revival of hate, anger, fear, much of it encouraged by the rhetorical excesses of the leadership, which are stirring up passions and terror, even the ludicrous claims about the Nicaraguan army ready to invade us—Ronald Reagan—the caravan of miserable people 'planning to kill us all.' All of these things, plus, you know, praising somebody who body-slammed a reporter, one thing after another — all of this raises the level of anger and fear, which has roots."

The roots of this distress, he argued, dates back 40 years in the United States as the American government has abandoned any role in supporting workers and families.

In response to the fact that Israel has defended the president and argued that there's anti-Semitism on both sides of the political spectrum, Chomsky was unsurprised. Israel, too, had been engaged in its own campaign of suppression and fearmongering of the Palestinians, and it finds an ideological partner in a far-right United States.

"There is an alliance of reactionary repressive states developing under the U.S. aegis," he said. "Israel is a leading member of it. Saudi Arabia is another, one of the most brutal, regressive, harsh states in the world; United Arab Emirates; Egypt under the harsh, brutal dictatorship. ... The alignment goes way back, but the Trump administration has gone way out of its way to lend support to Israeli crimes, Israeli expansion."

Saudi Arabia's war in Yemen, Chomsky argued, is finally and deservedly getting some attention. "For years, they’ve barely been discussed," he said. "Now, finally, you’re seeing pictures on the front page of starving Yemeni children, even a call for a ceasefire—much belated, little attention to our crucial responsibility for it."

In his final remarks, he issued a chilling warning: "It’s one of the gravest times in human history. Humans have been around for 200,000 years. For the first time in their history, they have to decide—and quickly—whether organized human society is going to survive for very long. And that’s not in the remote distance."