Right-wing extremists becoming 'same phenomenon' as ISIS but there's a 'Bermuda triangle' of intelligence on them: NYT 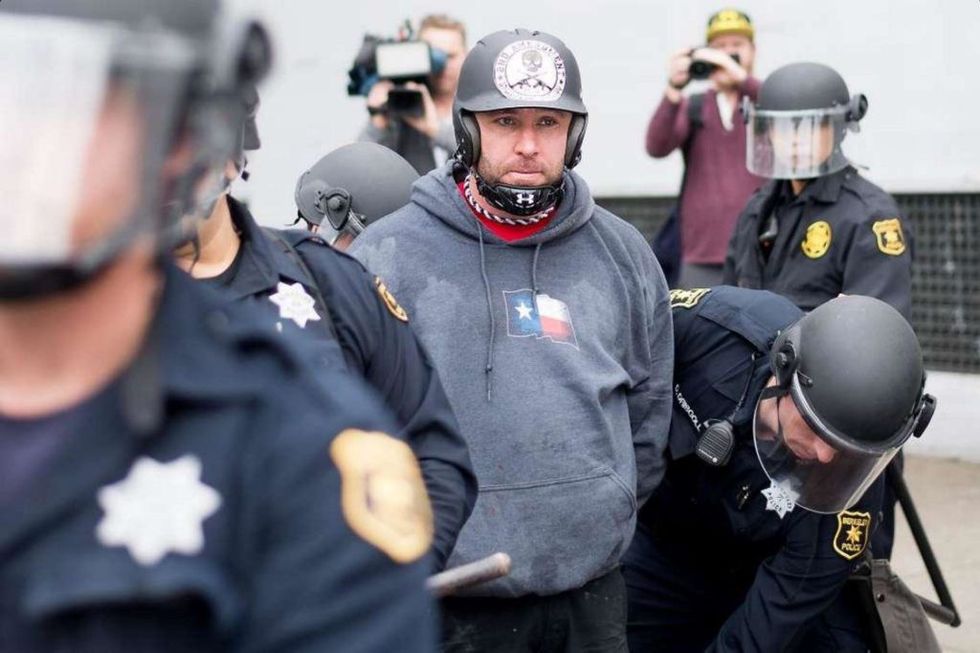 Alt-right hero Kyle Chapman, AKA "Based Stickman," being arrested at a rally (image via Twitter).

American rightwing extremism has been the deadliest form of terrorism in the country since 9/11, but federal law enforcement has done almost nothing to monitor or stop it, the New York Times reported today in a feature story.

The story includes a lot of statistics and anecdotes about American rightwing terror, including the Anti-Defamation League’s estimate that "71 percent of extremist-related fatalities in the United States between 2008 and 2017 were committed by members of the far right or white-supremacist movements."

In general, the report explains, these acts are committed by white men who are known to law enforcement through past violent felony convictions and who openly plan their activities online. But the FBI and other federal law enforcement groups have not looked into tracking them at all.

“We’re actually seeing all the same phenomena of what was happening with groups like ISIS, same tactics, but no one talks about it because it’s far-right extremism,” national security strategist P. W. Singer of the New America think tank told the Times.

The Times feature includes a detailed anecdote about a Florida rally led by infamous extremist Richard Spencer and local law enforcement's plans to prepare for and manage it.

He found "a Bermuda Triangle of intelligence" on rightwing extremist.

"There were no current intelligence reports [the Florida police chief] could find on the alt-right, the sometimes-violent fringe movement that embraces white nationalism and a range of racist positions. The state police couldn’t offer much insight. Things were equally bleak at the federal level. Whatever the F.B.I. knew, they weren’t sharing. The Department of Homeland Security, which produced regular intelligence and threat assessments for local law enforcement, had only scant material on white supremacists, all of it vague and ultimately not much help."

He could find nothing of use in preparation for the rally, which turned violent after everyone dispersed when a group of right-wingers gave Nazi salutes to counter-protestors in a parking garage.

“So you’re telling us that there’s nothing? No names we can plug into the automatic license-plate readers? No players with a propensity for violence? No one you have in the system? Nothing?" the Florida chief said, incredulously.

The report also goes into the ways these groups have effectively camouflaged their true views behind neutral-seeming "it's OK to be white" rhetoric.

“Basically, I’m just fed up with the fact that I’m cisgendered, I’m a white male and I lean right, toward the Republican side, and I get demonized,” said one right-winger at the Florida rally.

As the right-winger said this, Huffington Post reports, he was wearing an SS pin.