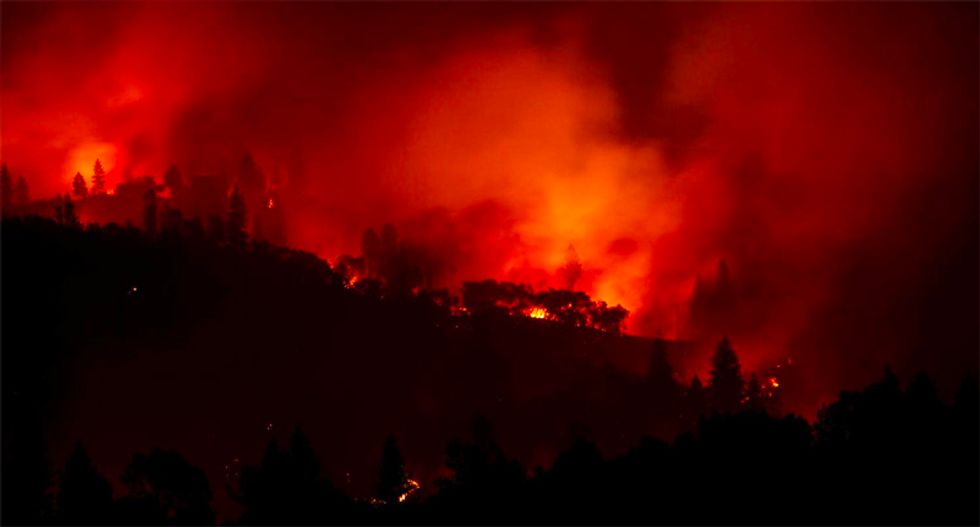 Severe hot and dry “devil winds” kicked up on Sunday in fire ravaged Southern California and more winds were expected in the north, fanning the flames of wild fires that have killed at least 25 people, officials said.

“This is getting bad,” said meteorologist Marc Chenard, with the National Weather Service’s Weather Prediction Center in College Park Maryland.

“We’ll get sustained winds of up to 40 mph and gusts between 60 mph and 70 mph,” he said early Sunday of the Santa Ana “devil wind” hitting the Los Angeles area where the Woolsey Fire has been burning since Thursday in the tinder-dry canyon of Ventura County and claimed at least 2 lives.

The air-masses blowing across the western U.S. deserts including Death Valley toward the coast are expected to bring the sustained high winds at least through Tuesday, he said.

Additional 40 mph winds will blow across the Sierra Nevada foothills in Northern California near Sacramento where the so-called Camp Fire has claimed at least 23 lives.

The Camp Fire burned down more than 6,700 homes and businesses in Paradise, more structures than any other California wildfire on record, and the death toll, which could rise, also makes it one of the deadliest.

Only the Griffith Park Fire in 1933 and Tunnel Fire in 1991 have claimed more lives.

Several of the bodies discovered earlier this week were found in or near burned out cars, police have said. The flames descended on Paradise so fast that many people were forced to abandon their vehicles and run for their lives down the sole road through the mountain town.

An additional 35 people have been reported missing and three firefighters have been injured. It was not immediately clear if any of the missing were among those found dead.

s of Saturday night, the Camp Fire had blackened more than 100,000 acres (40,500 hectares) at the edge of the Plumas National Forest. Crews had cut containment lines around about 20 percent of the blaze.

About 500 miles (800 km) to the south, the Woolsey Fire burning in the foothills above Malibu doubled in size from Friday night into Sunday threatening thousands of homes after triggering mandatory evacuation orders for a quarter million people in the upscale beach city as well as other communities in Los Angeles and Ventura counties.

The fire has destroyed at least 177 homes and other structures with a full count still underway, and has charred more than 83,000 acres as of late Saturday, officials said.

President Donald Trump, weighed in on the emergency during a trip to France, and said in a Twitter post early Sunday, “With proper Forest Management, we can stop the devastation constantly going on in California. Get Smart!”

Trump, a Republican, has previously blamed California officials for fires and threatened to withhold funding, saying the state should do more to remove rotten trees and other debris that fuel blazes.

State officials have blamed climate change and say many of the burn areas have been in federally-managed lands.