Trump, Oprah go head to head on US campaign trail 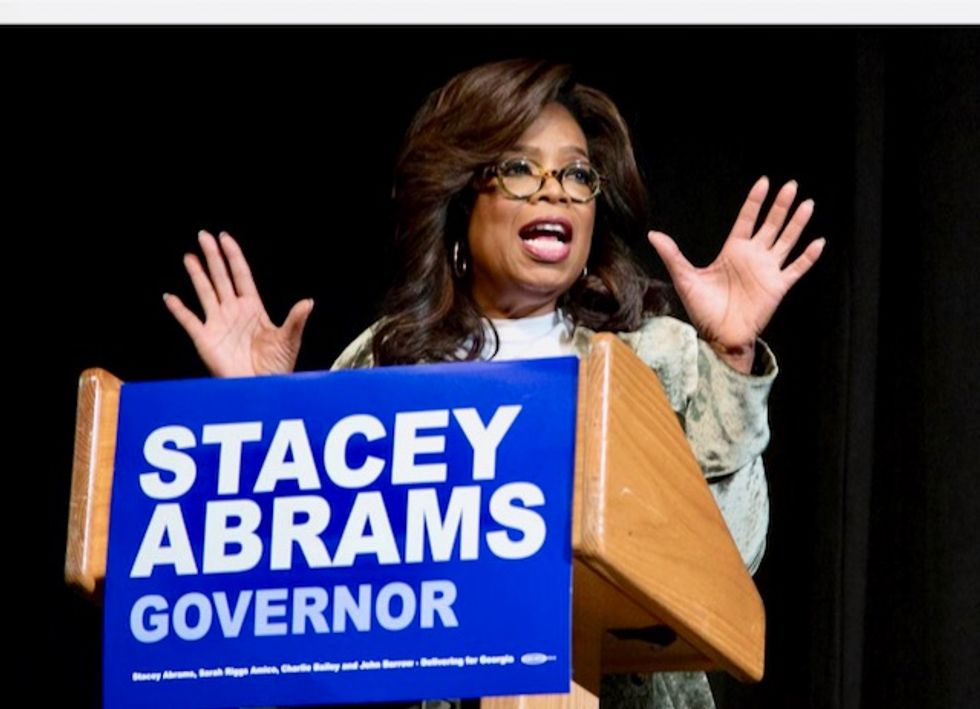 Winfrey appeared in Georgia to back Democrat Stacey Abrams, who is vying to become the United States’ first black female governor.

“I’m here today to support a change maker,” the movie star and former TV talk show host told a crowd in Cobb County, northwest of Atlanta. “She is dynamic. She is so inspired and inspiring.”

Trump, who gained nationwide fame as star of the reality show “The Apprentice,” was in the second day of an 11-rally tour of states with competitive U.S. Senate races.

He appeared at a rally in Missouri on Thursday night with Republican Josh Hawley, who is trying to unseat Democratic U.S. Senator Claire McCaskill in Tuesday’s elections, and called on voters to support what he termed “common-sense Republicans.”

“This election is a choice between Republican results and radical resistance,” Trump said as he talked up the economy and gave credit for its strength to Republicans in Washington.

The contest between Abrams, a former state lawmaker, and Republican Brian Kemp has become a flashpoint in the battle over voter access. As Georgia’s secretary of state, Kemp oversees the Southern state’s elections.

Georgia has one of the country’s strictest voter ID laws, measures Republicans say are needed to ensure no one votes illegally. Democrats contend the statutes unfairly block poor people and minority group members from voting.

Voting rights groups sued Kemp, saying his office had inappropriately stopped processing more than 50,000 voter registration applications, many from black voters, to improve his chances of winning. Other groups have challenged voting restrictions in states including North Dakota, Arkansas and Ohio.

Abrams said improving the state’s healthcare system was at the top of the list of issues she wanted to tackle if elected, a message that lined up with Democrats’ national focus as they seek to gain control of at least one chamber of Congress, which would give them the ability to oppose Trump’s agenda.

“The Republican solution has been nothing,” Abrams said on Thursday. “It has been absolutely nothing.”

The embrace of healthcare is a sharp shift for Democrats, who were wary of defending Obamacare in previous elections when the law that created it was unpopular with many voters.

A Reuters/Ipsos poll of 2,673 Americans conducted Oct. 1 through Oct. 28 found healthcare was the top issue for Democratic and independent voters heading into the elections, and third in priority among Republicans, behind immigration and the economy.

Democrats are favored to flip the 23 seats they need to secure a majority in the House of Representatives, although they are considered a long shot to pick up the two seats needed to capture the Senate.

Vulnerable Democratic senators in states Trump won in 2016 are also focusing on healthcare. Among them is Missouri’s McCaskill, who has criticized Republican challenger Hawley, the state attorney general, for joining a lawsuit filed by Republican attorneys general seeking to overturn Obamacare.

Trump vowed during his campaign to repeal Obamacare, formally known as the Affordable Care Act, and he fumed when the effort failed. Democrats warn that if Republicans keep control of Congress, people could lose coverage for pre-existing health conditions and other protections afforded by the law.

On Friday, Trump will travel to West Virginia, which he won by more than 40 percentage points in 2016. The state’s Democratic senator, Joe Manchin, has attacked his opponent, Republican state Attorney General Patrick Morrisey, for participating in the same lawsuit Hawley joined.

“One-hundred-thirty million Americans have that label stamped on their record: pre-existing condition,” he said. “This fight is personal.”

Trump, who will not be on the ballot next week, came under fire from Democrats and even some fellow Republicans on Thursday for an online video ad backing Republican candidates that attempted to link Democrats and immigrants to violent crime.

The ad featured courtroom footage of Luis Bracamontes - an illegal immigrant from Mexico convicted in the 2014 killings of two police officers in Sacramento, California - saying in accented English he would kill more cops. A narrator asks: “Who else would Democrats let in?”

Robert Reich, who served as secretary of labor in the Clinton administration, called the ad “desperate and vile ... They’ve resorted to fearmongering.”