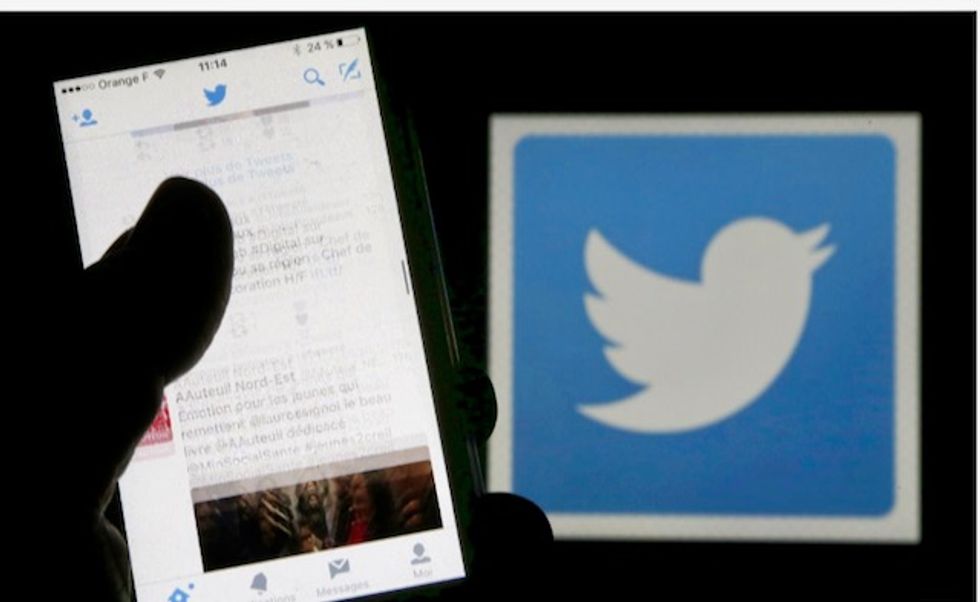 A man reads tweets on his phone in front of a displayed Twitter logo in Bordeaux, southwestern France, March 10, 2016. REUTERS/Regis Duvignau/Illustration/File Photo

Twitter Inc deleted more than 10,000 automated accounts posting messages that discouraged people from voting in Tuesday’s U.S. election and wrongly appeared to be from Democrats, after the party flagged the misleading tweets to the social media company.

“We took action on relevant accounts and activity on Twitter,” a Twitter spokesman said in an email. The removals took place in late September and early October.

Twitter removed more than 10,000 accounts, according to three sources familiar with the Democrats’ effort. The number is modest, considering that Twitter has previously deleted millions of accounts it determined were responsible for spreading misinformation in the 2016 U.S. presidential election.

Yet the removals represent an early win for a fledgling effort by the Democratic Congressional Campaign Committee, or DCCC, a party group that supports Democrats running for the U.S. House of Representatives.

The DCCC launched the effort this year in response to the party’s inability to respond to millions of accounts on Twitter and other social media platforms that spread negative and false information about Democratic presidential candidate Hillary Clinton and other party candidates in 2016, three people familiar with the operation told Reuters.

While the prevalence of misinformation campaigns have so far been modest in the run-up to the Congressional elections on Nov. 6, Democrats are hoping the flagging operation will help them react quickly if there is a flurry of such messages in the coming days.

The Tweets included ones that discouraged Democratic men from voting, saying that would drown out the voice of women, according to two of the sources familiar with the flagging operation.

The DCCC developed its own system for identifying and reporting malicious automated accounts on social media, according to the three party sources.

The system was built in part from publicly available tools known as “Hoaxley” and “Botometer” developed by University of Indiana computer researchers. They allow a user to identify automated accounts, also known as bots, and analyze how they spread information on specific topics.

“We made Hoaxley and Botometer free for anyone to use because people deserve to know what’s a bot and what’s not,” said Filippo Menczer, professor of informatics and computer science at the University of Indiana.

The Democratic National Committee works with a group of contractors and partners to rapidly identify misinformation campaigns.

They include RoBhat Labs, a firm whose website says it has developed technology capable of detecting bots and identifying political-bias in messages.

The collaboration with RoBhat has already led to the discovery of malicious accounts and posts, which were referred to social media companies and other campaign officials, DNC Chief Technology Officer Raffi Krikorian said in email.

Krikorian did not say whether the flagged posts were ultimately removed by Twitter.

“We provide the DNC with reports about what we’re seeing in terms of bot activity and where it’s being amplified,” said Ash Bhat, co-founder of RoBhat Labs.

“We can’t tell you who’s behind these different operations, Twitter hides that from us, but with the technology you known when and how it’s happening,” Bhat said.