US to restrict e-cigarette flavors to fight teenage vaping 'epidemic' 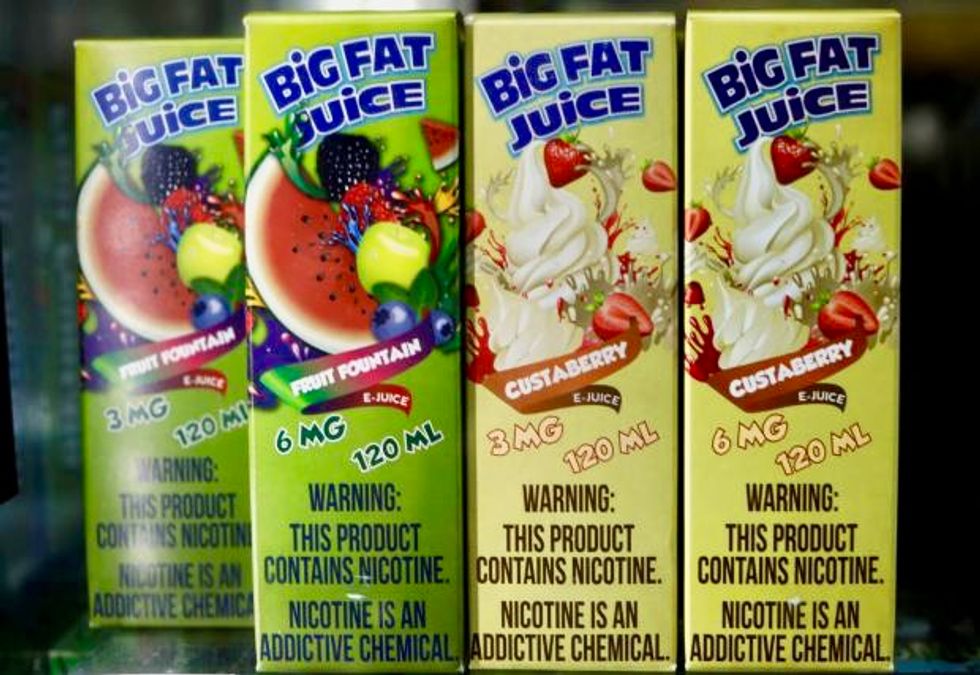 Packages of flavored liquids for e-cigarettes are seen displayed at a smoke shop in New York City, New York, U.S., May 1, 2018. REUTERS/Mike Segar

The U.S. Food and Drug Administration next week will issue a ban on the sale of fruit and candy flavored electronic cigarettes in convenience stores and gas stations, an agency official said, in a move to counter a surge in teenage use of e-cigarettes.

The ban means only tobacco, mint and menthol flavors can be sold at these outlets, the agency official said, potentially dealing a major blow to Juul Labs Inc, the San Francisco-based market leader in vape devices.

The FDA also will introduce stricter age-verification requirements for online sales of e-cigarettes. The FDA’s planned restrictions, first reported by The Washington Post and confirmed to Reuters by the official, do not apply to vape shops or other specialty retail stores.

There has been mounting pressure for action after preliminary federal data showed teenage use had surged by more than 75 percent since last year, and the FDA has described it as an “epidemic”.

“E-cigs have become an almost ubiquitous ‒ and dangerous ‒ trend among teens,” FDA Commissioner Scott Gottlieb said in September. “The disturbing and accelerating trajectory of use we’re seeing in youth, and the resulting path to addiction, must end. It’s simply not tolerable.”

That growth has coincided with the rise of Juul, whose sales of vaping devices grew from 2.2 million in 2016 to 16.2 million devices last year, according to the U.S. Centers for Disease Control and Prevention.

The agency threatened in September to ban Juul and four other leading e-cigarette products unless their makers took steps to prevent use by minors. The FDA gave Juul and four big tobacco companies 60 days to submit plans to curb underage use, a compliance period that is now ending.

The planned restrictions on flavors in convenience stores are likely to have the biggest impact on Juul, which sells nicotine liquid pods in flavors such as mango, mint, fruit and creme, previously called creme brulee.

The only other e-cigarette competitors sold at convenience stores are those marketed primarily by tobacco companies such as Altria Group Inc, British American Tobacco Plc, Imperial Brands Plc and Japan Tobacco Inc .

Those products, sold under the MarkTen, blu, Vuse and Logic brands, have lost market share as Juul has risen to prominence over the last year, growing from 13.6 percent of the U.S. e-cigarette market in early 2017 to nearly 75 percent now, according to a Wells Fargo analysis of Nielsen retail data.

E-cigarette products represent a small share of revenue for major tobacco companies, whereas Juul’s business is built entirely on the vaping devices. Revenue from e-cigarette devices made up less than 1 percent of British American Tobacco’s global revenue for the first six months of 2018, according to a company filing from July.

Altria last month announced it would stop selling its pod-based electronic cigarettes, generally smaller devices that use pre-filled nicotine liquid cartridges, in response to the FDA’s concerns about teen usage. The company also said it would restrict flavors for its other e-cigarette products to tobacco, menthol and mint.

Representatives from Altria, British American Tobacco, Imperial Brands and Japan Tobacco did not respond to requests for comment Thursday evening. A Juul spokeswoman declined to comment.

The companies have previously said their products are intended for adult use and that they work to ensure retailers comply with the law.

Juul has previously said the company wants to be “part of the solution in keeping e-cigarettes out of the hands of young people” but that “appropriate flavors play an important role in helping adult smokers switch.”

Meredith Berkman, a founder of Parents Against Vaping E-cigarettes, which seeks to curb underage use, said the agency’s move was a “good first step,” but added that “the final step should have happened yesterday.”

E-cigarettes have been a divisive topic in the public health community. Some focus on the potential for the products to shift lifelong smokers onto less harmful nicotine products, while others fear they risk drawing a new generation into nicotine addiction.

Last year the FDA, under Gottlieb, extended until 2022 a deadline for e-cigarette companies to comply with new federal rules on marketing and public health.