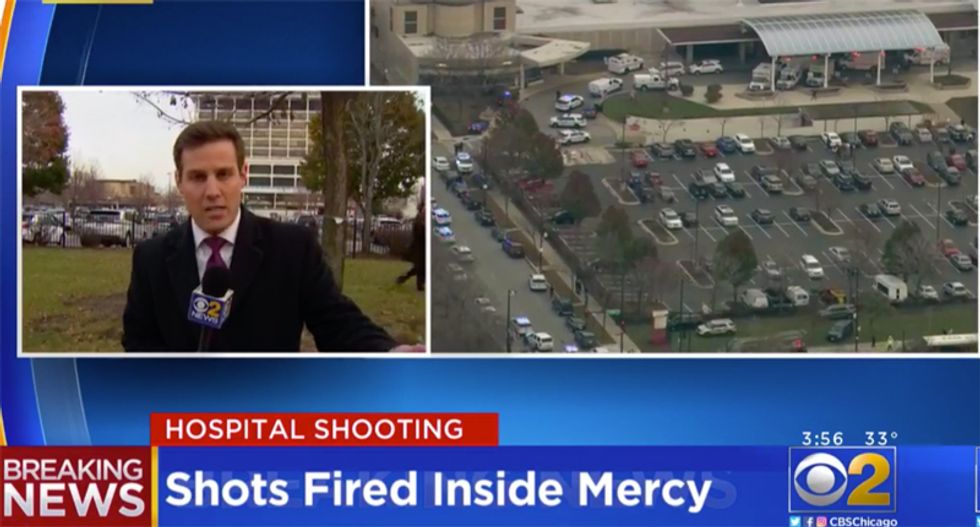 'Shots Fired Inside Mercy' reads the chyron on CBS 2 (screengrab)

A gunman has reportedly opened fire at the campus of Mercy Hospital in Chicago, CBS Chicago reports.

"According to dispatch reports, a woman has been shot," the station noted. "There are also reports an officer who has been shot."

The Chicago Tribune says there are "reports of multiple victims" according to police spokesman Anthony Guglielmi.

"Fewer than six people were believed shot, according to an official," the Tribune.

The Chicago Fire Department called an emergency medical services Plan II and sent at least 10 ambulances to the scene.

A #ChicagoPolice officer has been shot in the active shooter incident at Mercy Hospital. He is in critical conditio… https://t.co/bz6XinVkBk
— Anthony Guglielmi (@Anthony Guglielmi) 1542664901.0

NBC News reports the officer is in critical condition.

The suspected gunman at Mercy Hospital is dead, according to Chicago Police.
— Leslie Moreno (@Leslie Moreno) 1542668910.0

I’m losing my fucking mind because my cousin Cassandra recently has a stroke and is at mercy and no one is answerin… https://t.co/dnm9TVr3H3
— Moneypenny (@Moneypenny) 1542665370.0

Police have not yet identified the weapon used in the shooting, but people were already assuming it was an assault rifle and lashing out at the National Rifle Association.

Watch live footage on the ground below: