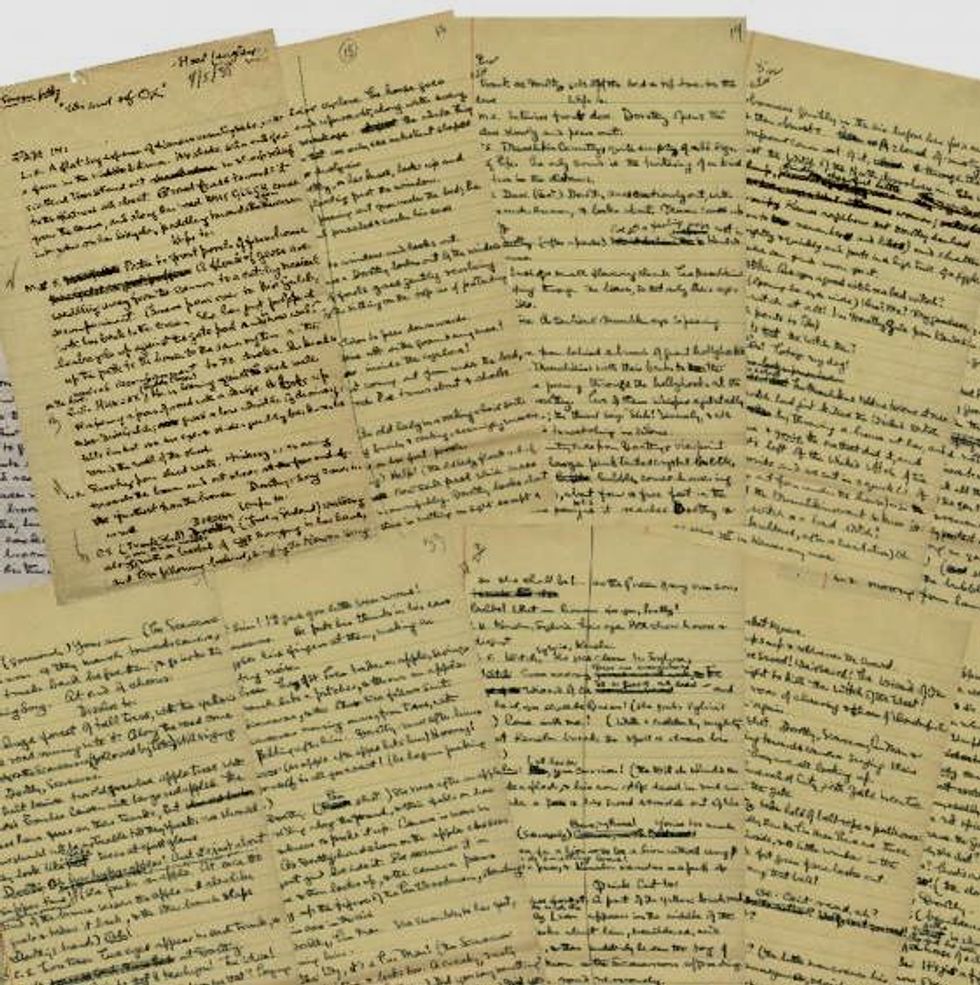 The original handwritten first draft script for the film "The Wizard of Oz" going up for auction, is seen in this image released by Profiles in History in Los Angeles, California, U.S., on November 7, 2018. Courtesy of Profiles in History/Handout via REUTERS

A collection of draft scripts for “The Wizard of Oz” and other material from the archives of the 1939 film are going up for auction in December and could fetch up to $1.2 million.

Langley, who died in 1980, was one of about a dozen screenwriters who worked on the big screen adaptation of L. Frank Baum’s children’s book that catapulted Judy Garland to fame and became an enduring movie classic.

Langley’s first three original drafts, dated between April 5 and May 14, 1938, are being sold alongside a fourth draft of the screenplay, written by Florence Ryerson and Edgar Allan Woolf, and a fifth draft from August 1938 by Langley.

“It is the single most important manuscript in Hollywood history,” Brian Chanes, head of consignment at Profiles in History, told Reuters.

Chanes said the more than 150 pages of handwritten manuscript notes and pages were “the genesis of ‘The Wizard of Oz,’” tracing its development and changes from first draft to the final version.

Some 16 photos of special effects, including the tornado sequence that transports Garland’s Dorothy from Kansas to the magical land of Oz, will be included in the single lot.

The archive is being sold by an anonymous private collector who bought it years ago from the late Los Angeles memorabilia collector, Forrest J. Ackerman, Chanes said.

Profiles in History put an estimated sale value of $800,000 - $1.2 million on the archival material, which will be auctioned during its Hollywood memorabilia sale in Los Angeles from Dec. 11-14.

Langley, Ryerson and Woolf all received credits for the screenplay when the movie was released in 1939, but several others also made uncredited revisions and contributions.

“The studio assigned a number of script writers and each scriptwriter did not know the other was working on it. The others kind of fizzled out,” Chanes said. “Noel Langley is the one that really set the stage.”

“The Wizard of Oz” won just two Oscars - for its music - after it was released in 1939 but went on to become one of the best-known musicals in Hollywood history. In 1989, it was among the first to be preserved by the National Film Registry.

Matt Gaetz: Homeowner associations should have power to deport immigrants

Rep. Matt Gaetz (R-FL) argued on Wednesday that homeowner associations (HOAs) should have the legal power to deport people believed to be undocumented immigrants.

Gaetz made the remark on Twitter in response to a bill offered by Sen. Josh Hawley (R-MO) that would give states the power of deportation.