Americans flock to find roots under the Christmas tree 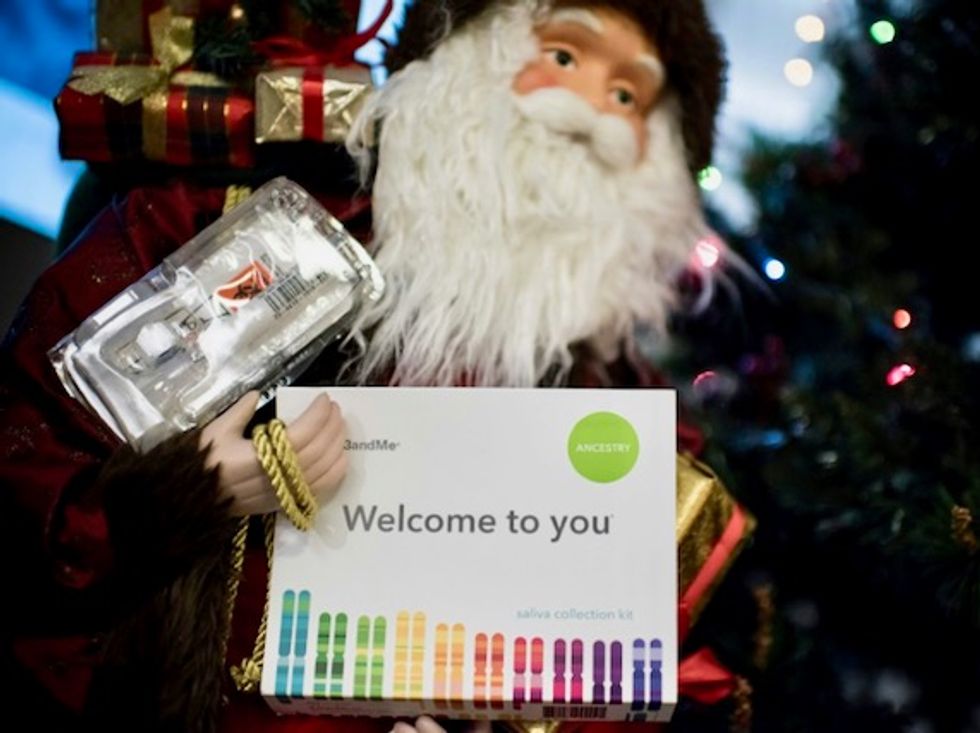 This Christmas, many Americans will find the gifts under their tree may lead to a long-lost relative or a map of ancestral migrations.

Or perhaps the discovery that their father is not who they think he is.

Sales of DNA testing kits are booming, as citizens in a country founded by immigrants explore their genetic origins in record numbers.

"There were definitely surprises," said Flora Bertrand, 40, who gave her husband one of the kits, ordered online for under $100.

The kits contain a plastic tube which the user spits into and ships back to the company lab. About a month later, the results are available online at a personalized site.

That normally features a map of the world showing the customer the regions of the world their ancestors hail from, and what percentage of their DNA comes from there.

Flora's husband, who lives in Brooklyn but is originally from Trinidad and Tobago, was unable to trace his family ancestry back more than a few generations because they had been victims of the trans-Atlantic slave trade.

"The biggest shock was how much European he had," she said. "Eighteen percent British and one percent Irish."

AFP / Eric BARADATFor less than $100, users can have their genetic profile compiled simply by spitting in a tube and returning it to the company lab

Millions of Americans have joined the search for their ancestors.

The market for DNA tests "has exponentially grown since 2017 and I would not be surprised if the market has doubled over the past year," said Heather Zierhut, assistant professor of genetics at the University of Minnesota.

This Christmas, the dozen or so companies offering test kits are redoubling their efforts with promotions and marketing drives that feature heart-warming tales of people finding unknown relatives or unexpected roots.

One example is a 69-year-old woman who found her 88-year-old biological mother, who had always thought her daughter had died shortly after being born.

"Genetic testing for ancestry looks at hundreds of thousands of our three billion DNA 'letters' and compares an individual's genetic data to that of databases of populations of people from different parts of the world," said Zierhut.

"The companies can also compare overall how much of your DNA is shared with other people who have taken the test," she said.

The two leading companies in the field, AncestryDNA and 23andMe, have carried out tests on 15 million people between them.

"We're planning on doubling our sales in Christmas 2018 versus 2017," said David Nicholson, co-founder of Living DNA, which offers its services in 90 countries.

Nevertheless, "DNA tests are absolutely not always the best gift for Christmas," warned Maarten Larmuseau, a researcher in genetic genealogy at University of Leuven in Belgium.

First of all, the results can be disappointing and vary from one test to the next because they depend so heavily on the database used for comparisons.

Secondly, participants are often "totally unaware that unexpected or sensitive results are always possible and might be delivered just by the click of a button," he said.

"These persons receive these life-changing and often traumatic results without any psychological assistance," said Larmuseau, noting with disapproval that the tests can also be carried out on children and babies.

He warned that an ancestry DNA test can become "a paternity test in disguise."

Furthermore, some companies offer optional testing for health issues, such as a person's predisposition towards developing Alzheimers or Parkinson's disease -- not the happiest gift to get from Santa, especially as some question the reliability of such tests.

The other serious problem is the security of extremely personal data, which may be at risk from hackers or be shared with partner companies, such as in the pharmaceutical field.

"The data (in de-identified form) can be used to refine a company's analysis or to be shared with other companies for purposes of research about ancestry, traits, and disease," said Sonia Suter, a law professor and bioethicist at George Washington University.

She said that while federal law protects privacy of medical data, "it applies only to health care providers, health plans, health care clearinghouses and business associates of these groups" and not to so-called direct-to-consumer companies.

"I do not think there is sufficient regulation of these entities," she said.

"This doesn't mean your information will immediately be accessible to insurers or law enforcement, but it's out there," she warned.

Her advice: "Think hard about whether you want the information and why. Don't use the test simply because you have it."