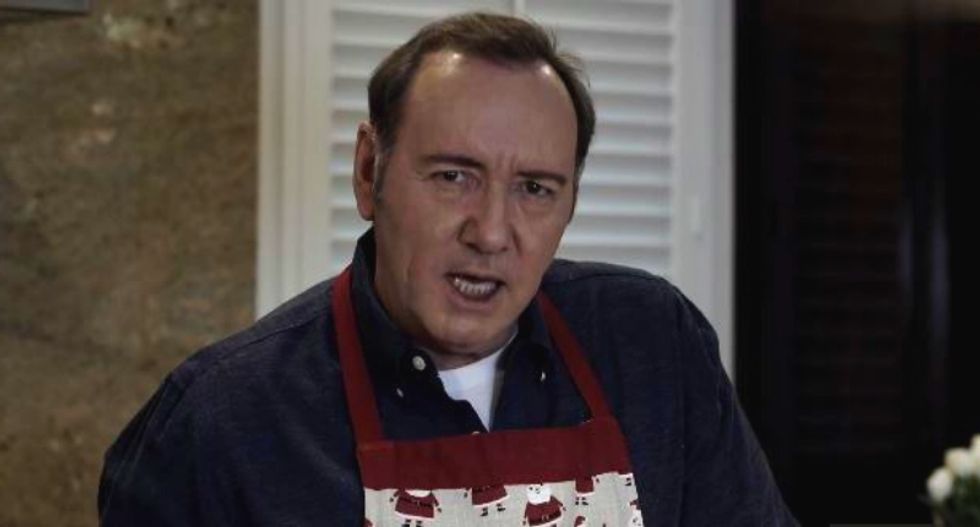 Actor Kevin Spacey in character as Frank Underwood in a Christmas Eve video released after news that he's been charged with sexual assault. Image via screengrab.

Just after news broke that actor Kevin Spacey is being charged for sexual assault, the disgraced star released a video in character as House of Cards' Frank Underwood -- and as many on Twitter noted, he did not issue an apology.

"You wouldn’t believe the worst without evidence, would you?" Spacey, speaking in the same South Carolina accent as Underwood, said while speaking directly to the viewer in the video titled "Let Me Be Frank."

"You wouldn’t rush to judgements without facts, would you?" the actor asked. "Did you? No, not you, you’re smarter than that. Anyway, all this presumption made for such an unsatisfying ending."

HuffPost noted that the video was the actor's first activity on his YouTube channel in a year "and none of the other videos in the last several years appear to be monologues."

"I recommend watching Kevin Spacey’s upsetting viral video where, speaking as Foghorn Leghorn, he inveighs against the sex crime charges against him," writer Dan O'Sullivan wrote. "It’s what a total psycho looks like."

"I could talk a lot more about that Kevin Spacey video but I just hope it telegraphs how unhinged and remorseless these people are," the journalist added.

Legal experts at Law & Crime noted that although Spacey may be able to "hide behind the 'character'" if the video is presented as evidence against him in his felony sexual assault trial, his best course of action would have been to "keep his mouth shut."

"Well," the report noted, "Spacey did not keep his mouth shut."

You can check out more responses below: