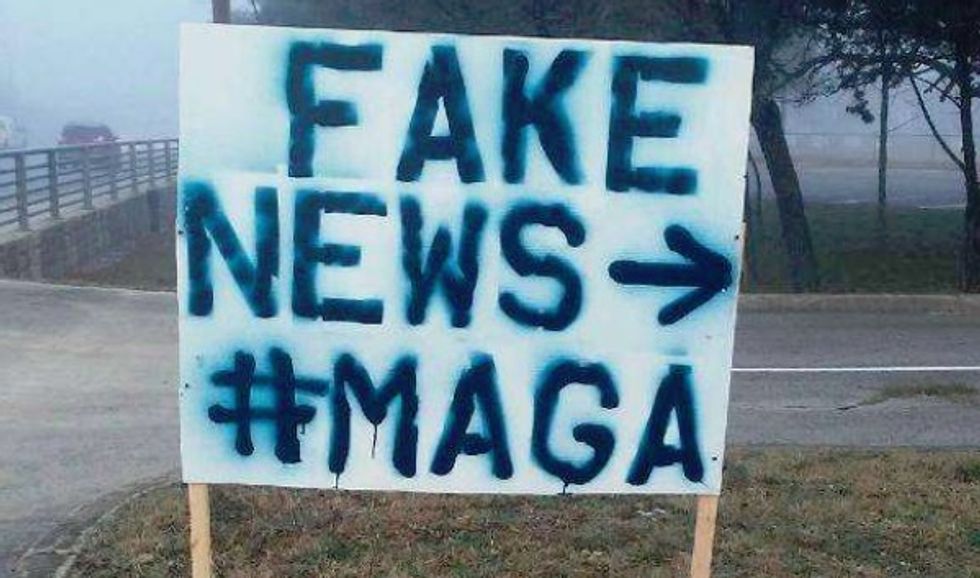 A sign that reads "FAKE NEWS -- #MAGA" placed outside the Holocaust Memorial Museum of San Antonio.

A sign that reads "FAKE NEWS -- #MAGA" was planted outside the Holocaust Memorial Museum of San Antonio this week, and was quickly removed upon its discovery.

The sign also featured an arrow pointed directly at the Holocaust memorial right after the words "fake news," indicating that the sign was advocating Holocaust denial.

"It's clearly a statement of Holocaust denial," Ronit Sherwin, CEO of the Jewish Federation of San Antonio, told MySanAntonio.com.

Sherwin said she had no idea who had planted the sign, and police so far have made no arrests.

Harry Levy, the chairman of the Jewish Federation of San Antonio, issued a statement this week calling the sign "doubly harmful."

"It laughs at the memory of all the millions of Jews who died in the Holocaust and is harmful to the precious few Holocaust survivors who witnessed the horrors of the Shoah first hand," he said. "The ignorance expressed by the perpetrators can only be countered by shining the light of truth upon our shared history."

Aaron Delwiche, a professor of communication at Trinity University, tells MySanAntonio.com that he was particularly disturbed to see President Donald Trump's rhetoric being used by anti-Semites, although he said he did not believe most of the president's supporters were Nazis.

"This anti-Semitic incident is a reminder that this sort of rhetoric has consequences,” Delwiche added. “The Holocaust was not fake news. It is time for all of us, on all sides of the political spectrum, to insist on facts, evidence, and logic when talking about politics."