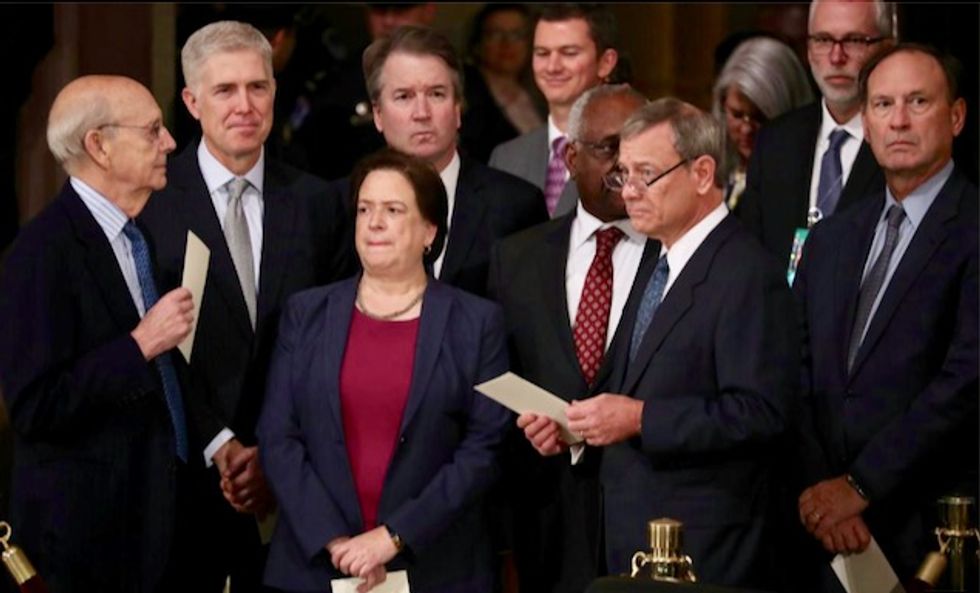 The U.S. Supreme Court’s reluctance to take up new cases on volatile social issues is putting it on a collision course with President Donald Trump, whose Justice Department is trying to rush such disputes through the appeals system to get them before the nine justices as quickly as possible.

That tension could come to head in 2019 if the court continues to avoid cases that the Republican president’s lawyers are aggressively trying to bring to the justices. The court’s 5-4 conservative majority includes Trump appointees Brett Kavanaugh and Neil Gorsuch.

While Trump has suffered a series of setbacks in lower federal courts since taking office last year, he has collected major victories at the Supreme Court. Most notably, the court in June upheld in a 5-4 ruling Trump’s travel ban targeting people from several Muslim-majority countries, with Gorsuch casting a pivotal vote, after lower courts had blocked the policy.

But since Kavanaugh joined the bench in October after a bitter Senate confirmation fight, the court has declined to take up appeals by conservative-leaning states seeking to deny public funds to women’s healthcare and abortion provider Planned Parenthood, while postponing action on a dispute over federal employment protections opposed by Trump’s administration for gay and transgender people.

At the same time, the administration has been seeking to leap-frog more liberal-leaning lower courts to get cases on divisive questions over immigration, transgender rights and the U.S. census before the justices more rapidly.

“The court seems to be in go-slow mode at the moment when it comes to big cases. The court appears content to focus on meat-and-potatoes cases rather than blockbuster ones,” said Kannon Shanmugam, a lawyer who regularly argues cases before the justices.

Trump has frequently railed against the lower courts, especially the liberal-leaning San Francisco-based 9th U.S. Circuit Court of Appeals, that have ruled against him in some major cases including the travel ban.

In a setback to social and religious conservatives who strongly support Trump, the high court on Monday declined to take up appeals by Kansas and Louisiana to deny Planned Parenthood public funds under the Medicaid health insurance program for the poor.

Three of the court’s five conservatives voted to hear the matter, but with conservatives Kavanaugh and Chief Justice John Roberts declining to join them they fell a vote short of the required four needed to take up a case.

Conservative Justice Clarence Thomas accused his colleagues of ducking the case because of its controversial nature.

Last week, the court put off action in another divisive case involving whether federal employment law outlaws discrimination against gay and transgender people. There are three appeals on the issue begging attention from the court, but the justices have not yet acted.

The court also has delayed action in a case concerning Republican-drawn U.S. congressional districts in North Carolina that were struck down by a lower court that found the boundaries were drawn to ensure lopsided electoral victories for their party against rival Democrats.

“It does appear they are being very careful based on their actions so far. They don’t seem eager to take on avoidable, potentially controversial cases. It may be that they have a heightened sensitivity right now,” Shannon Minter, legal director of the National Center for Lesbian Rights advocacy group, said of the justices.

The court early next year must decide whether to hear two high-profile appeals by Trump’s administration. One involves the president’s bid to end deportation protections for hundreds of thousands of illegal immigrants known as “Dreamers” who were brought into the United States as children. The other involves his proposed limits on transgender people serving in the military.

Both policies were blocked by lower courts.

In an unusually aggressive strategy, Solicitor General Noel Francisco, a conservative lawyer who is Trump’s top Supreme Court advocate, sought to bypass lower appeals courts by asking the justices to take up both cases early in the appellate process.

Of the two cases, the court may be more likely to hear the immigration dispute, according to Nicole Saharsky, a former Justice Department lawyer now in private practice. The transgender case “seems like more of a reach,” Saharsky added.

Jonathan Adler, a professor at Case Western Reserve University School of Law, said Trump’s lawyers are in a delicate position.

“On the one hand, if they overplay their hand on a regular basis, they risk alienating the justices. On the other hand, there are some cases ... in which they have legitimate complaints. In a sense, they don’t want to cry wolf, but there are wolves out there,” Adler said.

The justices have agreed to hear an administration appeal in a case in which a group of states has challenged the Commerce Department’s decision to add a contentious citizenship question to the census to be conducted in 2020.

But in doing so, the justices sent mixed messages by refusing to block a trial on the issue in New York, as the administration requested. The case will be argued before the justices on Feb. 19.

Reporting by Lawrence Hurley; Editing by Kevin Drawbaugh and Will Dunham