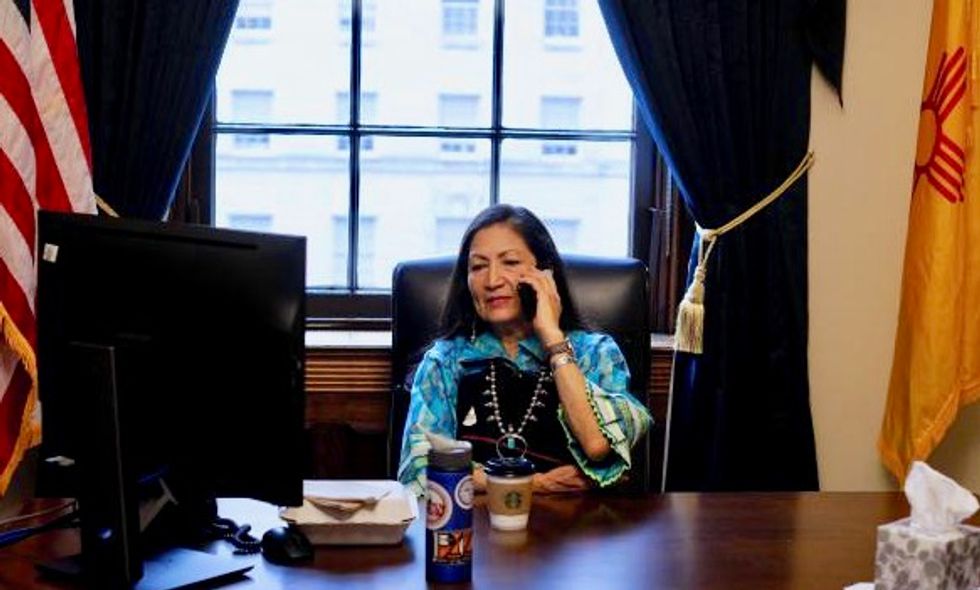 Deb Haaland works in her office at the U.S. Capitol before being sworn in as one of the two first Native American women in the U.S. House of Representatives in Washington, U.S., January 3, 2019. REUTERS/Brian Snyder

The day before Deb Haaland was sworn in last week as a freshman lawmaker in the most diverse U.S. House of Representatives class in history, she said the weight of being one of the first two Native American women to serve in Congress had not yet fully hit her.

Haaland, 58, had just conducted a brief staff meeting and was sitting in her new office on Capitol Hill as staffers got phones working and solved logistical problems like wrestling a printer through a narrow doorway.

The first-time elected official represents New Mexico’s 1st Congressional District and is a member of the state’s Laguna Pueblo tribe. “Congress has never heard a voice like mine,” the Democrat said.

“As the first Native American woman in Congress, I know that there will be an expectation on me by tribes across the country to be somebody that can move their issues forward,” Haaland said. “That’s absolutely something I feel optimistic that I will be able to do.”

She said there is an “epidemic” of missing and murdered indigenous women, and Haaland would like Congress to hold additional oversight hearings on the issue and make sure tribal justice systems have the resources they need to conduct proper investigations.

There are many firsts among them. Haaland and Sharice Davids of Kansas, a member of the Ho-Chunk Nation, are the first Native American women. Ilhan Omar of Minnesota and Rashida Tlaib of Michigan are the first Muslim women. Ayanna Pressley of Massachusetts and Jahana Hayes of Connecticut are the first black women to represent their states. All are Democrats.

When Haaland was born in 1960, Native Americans did not have the right to vote in New Mexico - despite being granted full U.S. citizenship by the federal government in 1924. They got it in 1962, making the Southwestern state the last in the nation to extend it.

On Thursday, Haaland welcomed her new constituents to an open house at her congressional office before being sworn in on the House floor. She wore traditional tribal garments to the ceremony, including a pomegranate blossom necklace of silver and turquoise, signifying protection and strength, made by a Laguna artist.

After raising her hand to take the oath of office with her peers, the consequence of the milestone sunk in.

Overcome with emotion, Haaland turned to embrace Davids, borrowing the edge of her new colleague’s scarf to dab away her tears.