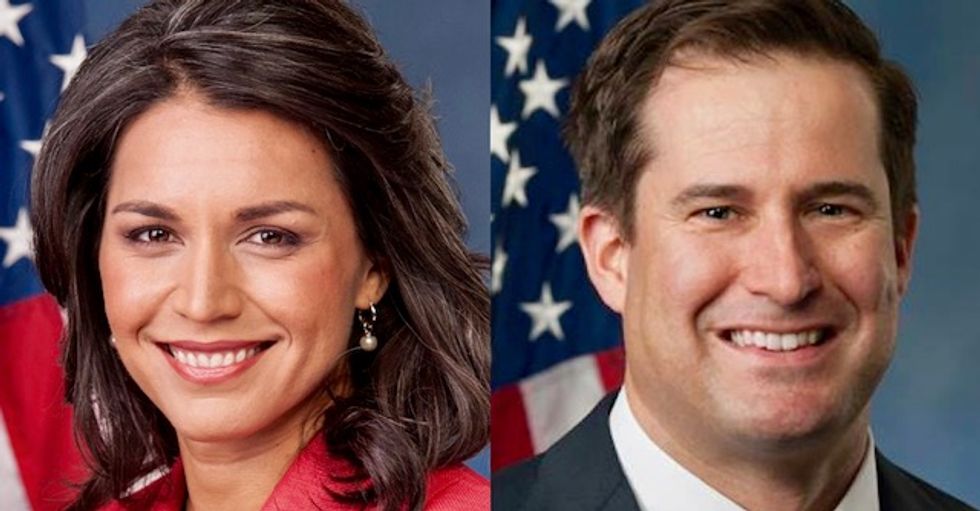 Progressive Democrats are wasting no time in cleaning house – in this case the House of Representatives – of members of their own party some think are too conservative or don't represent the party well.

The Hill reports that among them is Rep. Seth Moulton of Massachusetts. Congressman Moulton was once a rising star, when he was elected in 2014. But the 40-year old former Marine Corps decorated officer angered many with his multi-year war against then-former Speaker Nancy Pelosi. Now that she has regained the gavel and won several major battles in a few short weeks against President Trump, Moulton is persona non grata to many in the Democratic Party

RELATED: THE LIST: HERE ARE THE 16 HOUSE DEMOCRATS (INCLUDING 14 MEN) WHO SIGNED A LETTER OPPOSING PELOSI AS SPEAKER

Rep. Tulsi Gabbard of Hawaii is also in trouble. Her 2017 meeting with Syrian President Bashar Assad raised eyebrows and drew the ire of Democrats and Republicans alike. More recently, her previous anti-LGBTQ activism has drawn anger and fire. And just this week news that her just-launched campaign for president is already disintegrating leaves her ripe for attack.

Conservative Democratic Congressman Henry Cuellar of Texas also makes The Hill's report. Cuellar has voted for anti-abortion legislation, voted to constitutionally define marriage as between one man and one woman only, and even campaigned for a Republican.

Another conservative Democrat, Rep. Dan Lipinski of Illinois, to some is a Democrat in name only. He is anti-LGBTQ. Lipinski in 2014 voted to reaffirm DOMA, the Defense of Marriage Act of 1996 that banned the federal government from recognizing same-sex marriages. The Supreme Court later struck down a key portion of the law.

Lipinski is also opposed to same-sex marriage, ObamaCare, the DREAM Act, and abortion rights. He was an original co-sponsor of the religious right's First Amendment Defense Act (FADA), a bill that allows discrimination by people claiming their sincerely held religious views do not permit them to do business with LGBT people or same-sex couples.

Also making The Hill's list is Rep. Stephen Lynch of Massachusetts. In Congress since 2001, Lynch is rated as a "a Populist-Leaning Liberal" by OnTheIssues, which tracks positions of all federal lawmakers and other politicians. Lynch opposed Nancy Pelosi as Speaker. The Hill reports video game developer Brianna Wu, who lost to Rep. Lynch by 48 points last year, will challenge him again in 2020.

This report has been updated to accurately reflect the 2018 performance of Brianna Wu against Rep. Lynch.