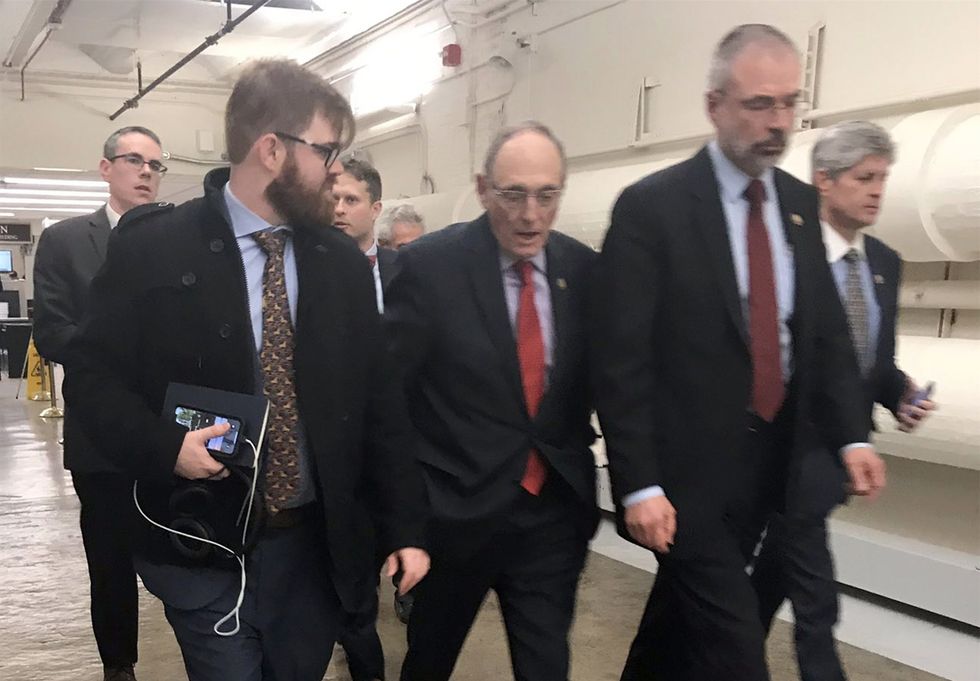 Two Republican congressmen met with a far-right author who once claimed black people have a "violence gene" -- and claimed they did so to discuss DNA.

NBC News reported Thursday that Reps. Phil Roe (R-TN) and Andy Harris (R-MD), who were on Wednesday photographed walking through the House of Representatives with far-right activist Chuck Johnson, claimed they were doing so to talk about the "increasing the number of sequenced genomes for research."

Johnson, Roe's statement read, represents a company that does work with DNA research -- though neither congressmen could identify the company when asked.

Immediately after HuffPost's Matt Fuller posted the photo that showed a man later confirmed as Johnson walking with Roe and Harris, reports about the far-right activist's racist views began to resurface.

In an interview with shock jock Joe Rogan from 2015, Johnson -- who, like many white nationalists, has an obsession with the genetics of minorities -- claimed that black people are genetically predisposed towards violence.

"Blacks have the MAOA gene that whites and Asians don't have," he told Rogan, "therefore blacks have a proclivity towards violence."

As HuffPost noted in its report on Johnson's meeting with the congressmen, he has a history of making white supremacist comments and actions that include Holocaust denial and the creation of a website used to crowdfund money for neo-Nazis and other racists barred from normal platforms.

After the meeting -- which took place days after the House passed a resolution denouncing white supremacy in the aftermath of Rep. Steve King (R-IA) appearing to embrace it -- Reps. Harris and Roe issued statements distancing themselves from Johnson, NBC noted.

"Of course I disavow and condemn white supremacy and anti-semitism," Harris said, claiming he was "unaware" of the activist's past statements.

A spokesperson for Roe told NBC News that Johnson's statements were "abhorrent" and that his racist views didn't come up during their conversation, which the representative claimed lasted only 10 minutes.

Donald Trump is desperately trying to stop, or at the very least stall, the subpoenas from the Jan. 6 House Select Committee, but a CNN report explained that there are few legal options available to the former president. The current plan appears to be to bury any House request with years of lawsuits, said CNN.

Monday, Trump filed a lawsuit to stop the National Archives from handing over any communications from his White House staff relating to Jan. 6, organization and planning around the event and any efforts to promote rage among his supporters around a "stolen election."