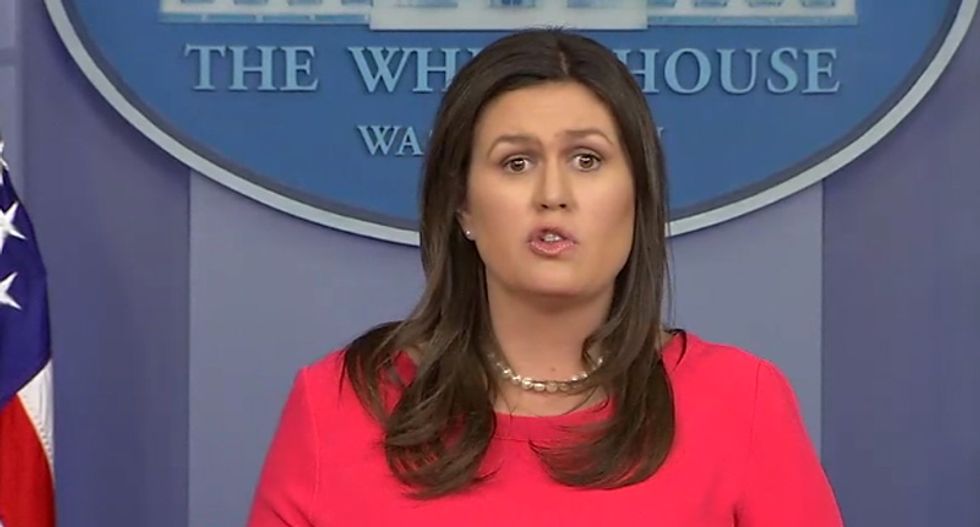 Sarah Sanders is being strongly criticized for defending the students who harassed a Native American veteran over the weekend. The White House White House press secretary told Fox News, "I’ve never seen people so happy to destroy a kid’s life."

Sanders, who says President Trump will meet with the students from the Kentucky conservative private Catholic school in the White House after the shutdown, spoke with Sean Hannity on Fox News Tuesday night, as Talking Points Memo reports.

“I think what happened with BuzzFeed is a great lesson for the media,” Sanders said, referring to the news outlet's story that President Trump told Michael Chen to lie to Congress. Although Special Counsel Robert Mueller's office refuted aspects of the article, Buzzfeed is standing by its reporting.

“Quit trying to be first and start trying to be right," she continued, directing her anger at the media. President Donald Trump has told on average about six lies per day since taking office two years ago.

"We have seen time and time again where they run out here with outrageous, ridiculous stories. One person reports it to begin with and they all jump on it. We saw it again with the Covington students. I’ve never seen people so happy to destroy a kid’s life.”

Sanders, in the video above, begins by claiming President Trump "would love for people to report things accurately." (Fox News' Ainsley Earhardt has said Trump means, "report the story the way I want it reported.")

Some on social media were quick to jump on Sanders for her hypocrisy. Among them, David Hogg, one of the Parkland student survivors who were mercilessly attacked and bashed on Fox News and in the conservative media as "crisis actors," and worse:

Many others noted the Trump administration since 2017 has enacted a policy to intentionally separate thousands of migrant children from their families at the border, in a failed effort to deter others from attempting to cross the border in violation of the law, which is a misdemeanor.

Her boss took out a full-page ad in the New York Daily News to call for the death penalty for a group of innocent t… https://t.co/BIV7iUH8PO
— Josh Billinson (@Josh Billinson) 1548249387.0