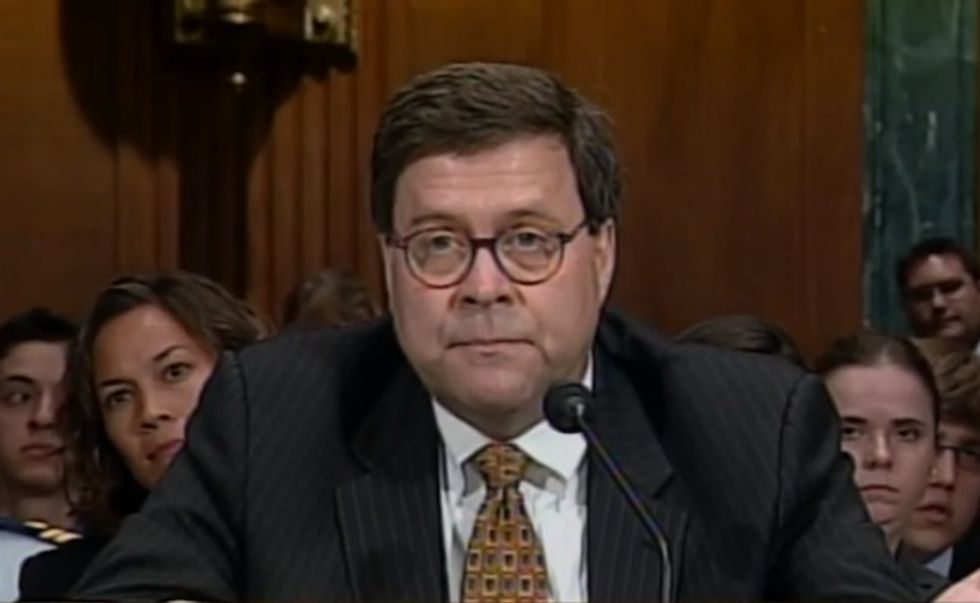 U.S. President Donald Trump’s attorney general nominee, William Barr, will pledge at his confirmation hearing to protect Special Counsel Robert Mueller’s Russia probe and stress his own independence from the White House, according to prepared testimony released on Monday.

“On my watch, Bob will be allowed to complete his work,” Barr said in the prepared remarks ahead of two days of confirmation hearings before the Senate Judiciary Committee starting on Tuesday morning.

Mueller is investigating Russia’s interference in the 2016 U.S. presidential election, possible collusion between the Kremlin and Republican Trump’s campaign, and potential obstruction of justice.

Barr, an attorney general under former President George H.W. Bush, also a Republican, will address his prior criticism of Mueller’s probe, telling members of the committee that a memo he sent last year that called the investigation “fatally misconceived” only outlined his concerns that Mueller might be misinterpreting one aspect of the law.

“The memo did not address - or in any way question - the Special Counsel’s core investigation,” Barr will tell the panel.

If confirmed, Barr would take over supervision of the probe from the No. 2 Justice Department official, Rod Rosenstein, who has overseen the effort since the previous attorney general, Jeff Sessions, recused himself, a decision Trump repeatedly criticized. The president ousted Sessions in November.

Russia has denied U.S. intelligence agencies’ findings that it meddled in the election to help Trump by spreading disinformation and hacking political party emails. Trump has denied any collusion with Moscow and called Mueller’s probe a “witch hunt.”

Trump said on Monday that he never worked for Russia, his first denial after a media report saying the FBI in 2017 investigated whether or not he acted on Moscow’s behalf.

Barr has broad support from Republicans who control the Senate, but some Democrats have questioned whether he is the best choice to serve as the top U.S. law enforcement officer at a time when Trump faces several investigations.

“I need to know whether he will submit to an official ethics review to determine whether he should recuse himself,” Democratic Senator Chris Coons said on a conference call.

Barr will emphasize his independence, telling lawmakers that he did not seek out the job. He said Trump did not ask him for a promise of loyalty and he did not offer one.

“As Attorney General, my allegiance will be to the rule of law, the Constitution, and the American people,” he will say.

Former FBI Director James Comey has said Trump asked him to pledge loyalty before firing him in May 2017. Comey was overseeing a counter-intelligence probe on suspected election interference by Moscow and his dismissal led to the Department of Justice’s appointment of Mueller, a former FBI director.

Mueller’s investigation and other inquiries have clouded Trump’s two years in office. Mueller has secured indictments against or guilty pleas from 33 people and three Russian companies, including former Trump campaign chairman Paul Manafort.

Democrats have worried that Trump may try to quash Mueller’s findings when he concludes his work. Barr will tell lawmakers that he believes it is important that Congress and the public are informed of his results.

“My goal will be to provide as much transparency as I can consistent with the law,” according to the prepared remarks.

He said he would also prioritize voting rights and efforts to ensure that foreign powers do not interfere with U.S. elections.

Barr has taken steps to address concerns about possible conflicts of interest arising from his decades of work in the private sector, where he amassed $37 million in assets.

Government ethics forms released publicly on Monday show that if confirmed, Barr will resign from the board of Dominion Energy Inc, and sell off financial interests in other companies, including AT&T Inc, Bristol-Myers Squibb Co, J.P. Morgan Co, Bank of America Corp, Altria Group Inc, Merck & Co Inc, and Pfizer Inc, among others.

Barr told Democratic Senator Amy Klobuchar last week that he would recuse himself from the Justice Department’s efforts to block the merger of AT&T and Time Warner Inc. Barr served on the Time Warner board from 2009 to June 2018.