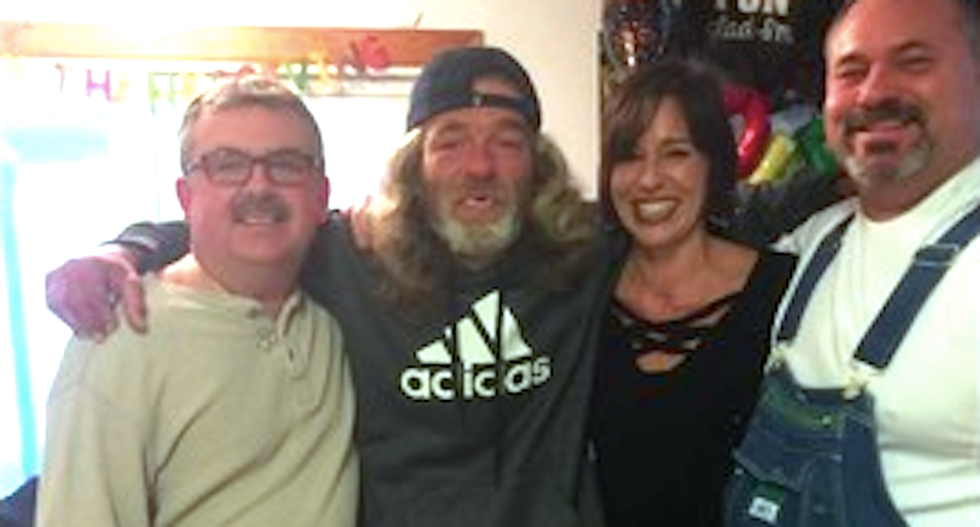 An Arkansas couple helped a homeless man reunite with his family, and even drove him hundreds of miles out of state to return home.

Jody and Dawn Gieber encountered James hanging around the courthouse where they both work, and they eventually got to know him, reported KARK-TV.

"People would say James was very angry, James was a mean person -- he wasn't, James was just hungry," Dawn Gieber told the TV station. "He was cold, he was eating out of dumpsters. James just had no resources, and my husband and I just felt that there was something we needed to do to help him."

Dawn works as a records specialist for the circuit court in Pulaski County, where Jody Gieber is a sheriff's deputy.

"I would see him as I went into the courthouse, (and) my husband would also see him as he patrolled," Dawn Gieber said.

"One day I just asked him, 'Why are you homeless?' I treated him like a human -- we all have a story."

She learned that James had been living on the streets of Little Rock for 15 years, and he said he'd lost contact with his family and didn't know how to reach them.

Jody Gieber developed some leads online, and they finally heard back from a relative after hours spent making phone calls and sending emails.

"It was right before Thanksgiving, and we get a call back from his niece," Dawn said. "They had been looking for him and thought he was dead."

The couple arranged for James to speak with his family, and they were moved by his emotional response to their voices.

"I turned to my husband and said, 'Road trip,'" Dawn Giber said.

They gave James some clothes, and made plans to drive him 600 miles to Illinois -- but they first had to clear up some outstanding warrants he'd picked up from his time on the streets.

They explained the situation to a judge and offered to pay his fees, and the court dismissed all the charges.

James is currently living with family members in Illinois, and a brother said he's doing well.

"Seeing James reunite with his family was so rewarding," Dawn Gieber said. "It was just the right thing to do - he's a person and that matters."