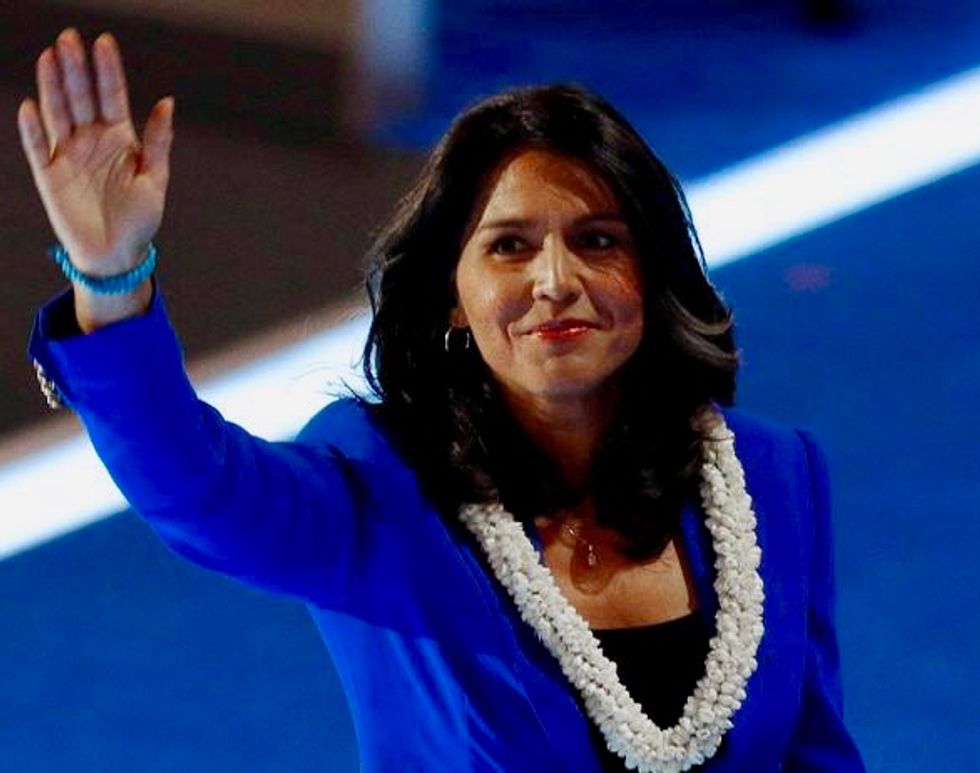 U.S. Representative Tulsi Gabbard, an Iraq War veteran who at times has had a spiky relationship with the Democratic Party, on Saturday will add another liberal voice to a burgeoning field of candidates seeking the party’s 2020 presidential nomination.

Gabbard, 37, will officially launch her candidacy in Hawaii, where she has served as a congresswoman since 2013. A Samoan-American, she was the first Hindu elected to Congress.

She made headlines in 2016 by quitting a leadership post at the Democratic National Committee over the party’s decision to limit the number of debates between presidential candidates Hillary Clinton and Bernie Sanders, a move analysts said helped Clinton.

Gabbard then endorsed Sanders for president, becoming one of the few members of Congress to do so. She remains popular with some progressives but will have serious competition on that front with candidates such as Senators Kamala Harris and Elizabeth Warren in the presidential field.

Gabbard has not been a factor in early 2020 opinion polls, and her nascent campaign already has shown signs of trouble.

Politico reported this week that her campaign manager was set to depart in the coming days after weeks of disarray.

Gabbard’s campaign on Friday confirmed the departure but said Rania Batrice would remain an adviser to Gabbard.

Gabbard also was forced to apologize for her past opposition to same-sex marriage, which she now supports, and has been engaged in a public feud with Hawaii’s popular Democratic Senator Mazie Hirono over a federal judicial nominee.

Democratic nominating contests begin in February 2020. The candidate who amasses the majority of delegates will be nominated at the party’s convention in the summer and will likely face Republican President Donald Trump in November’s general election.

Gabbard served in Iraq and Kuwait in a Hawaii National Guard field medical unit, experiences she said helped inform her noninterventionist foreign policy views. She has made veterans issues a priority while in Congress.

Gabbard has consistently opposed U.S. intervention in Syria, going as far as to secretly meet with Syria’s president, Bashar al-Assad, in January 2017, sparking fierce criticism from some in her own party. She opposes removing Assad from power.

Later that year, she expressed skepticism over the Trump administration’s conclusion that Assad’s regime was behind a chemical weapons attack that killed dozens in Syria. Former Democratic presidential candidate Howard Dean called Gabbard’s views “a disgrace” and said she was unfit to be in Congress.

Last November, she blasted Trump for not taking a harder stance toward Saudi Arabia following the murder of journalist Jamal Khashoggi.

She also slammed the administration for supporting Saudi Arabia in its conflict with Yemen.

In 2015, she parted with many Democrats by criticizing then-President Barack Obama for refusing to use the term “Islamic extremism” to describe members of Islamic State and other militant groups.

CHICAGO — A 15-year-old boy died Tuesday afternoon after being shot near a high school in the Austin neighborhood, police said. The boy had been near a sidewalk when he was struck by gunfire at 3:16 p.m. on the 5100 block of West Harrison Street, the same block as Michele Clark Academic Prep Magnet High School, police said. He was transported to Stroger Hospital in critical condition and later pronounced dead, police said. The boy, identified by the Cook County medical examiner’s office as Kevin Davis, was a student at the school, Chicago police 15th District Cmdr. Andre Parham said at a Tuesd...