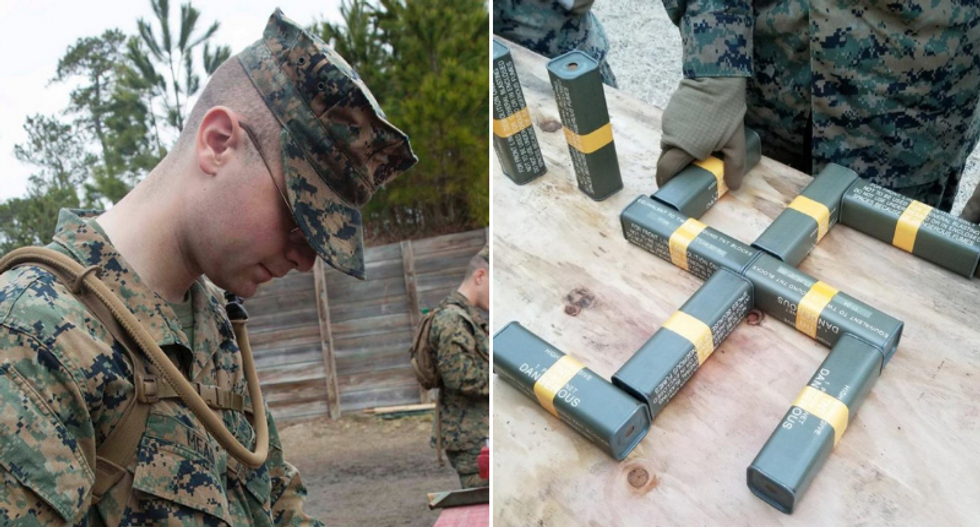 Mason Mead at Camp Lejeune (left, via Ursula Smith/US Marine Corps) and an image allegedly posted by Mead of explosives in the shape of a swastika (right, via screengrab).

The U.S. Marine Corps is investigating an active-duty service member over pro-Nazi and racist posts he allegedly made.

Stars & Stripes reported Tuesday that the corps acknowledged an investigation into Mason Edward Mead, a lance corporal stationed in Kaneohe Bay, Hawaii after Twitter users linked him to posts he allegedly made under the handle @Jacobite_Edward.

In a statement, the Okinawa-based III Marine Expeditionary Force said the corps "is aware of derogatory online comments attributed to a Marine" and that the Naval Criminal Investigative Service "is thoroughly investigating this situation and the command will address any misconduct at the appropriate judicial or administrative level."

News of the investigation into Mead comes less than a week after Christopher Hasson, a Coast Guard lieutenant, was arrested after allegedly making a hit list of liberal targets.

As the Marine Corps Times noted, many of the posts made by the account contained Nazi propaganda images as well as racist comments.

The @Jacobite_Edward account was linked to Mead by Ed Beck, a Marine Corps veteran, earlier in the week.

Beck noted that one of the account's racist posts was centered on Japanese people — and shows a photo of a uniformed service member in Japan.

The Marine Corps Times added that "tweets and photos on social media referenced Mead’s unit and some photos showed parts of his name tapes on military gear and his camouflage utilities."

Beck noted on Tuesday that he appears to not have been the only person that reported Mead.

"Important to note I’m not the only person who helped report this Marine," the veteran tweeted. "Many active service members, vets, and concerned civilians were involved with this."

He then referenced a November 2018 tweet from Mead's since-deleted account in which the @Jacobite_Edward user claimed he'd been reported multiple times.

As Beck noted later Tuesday on Twitter, the reports likely came from an old account allegedly belonging to Mead in which he made death threats against leftist leaders.

Raw Story reached out to the III Marine Expeditionary Force for comment about whether Mead had been reported in the past or if any prior disciplinary action had been taken against him.