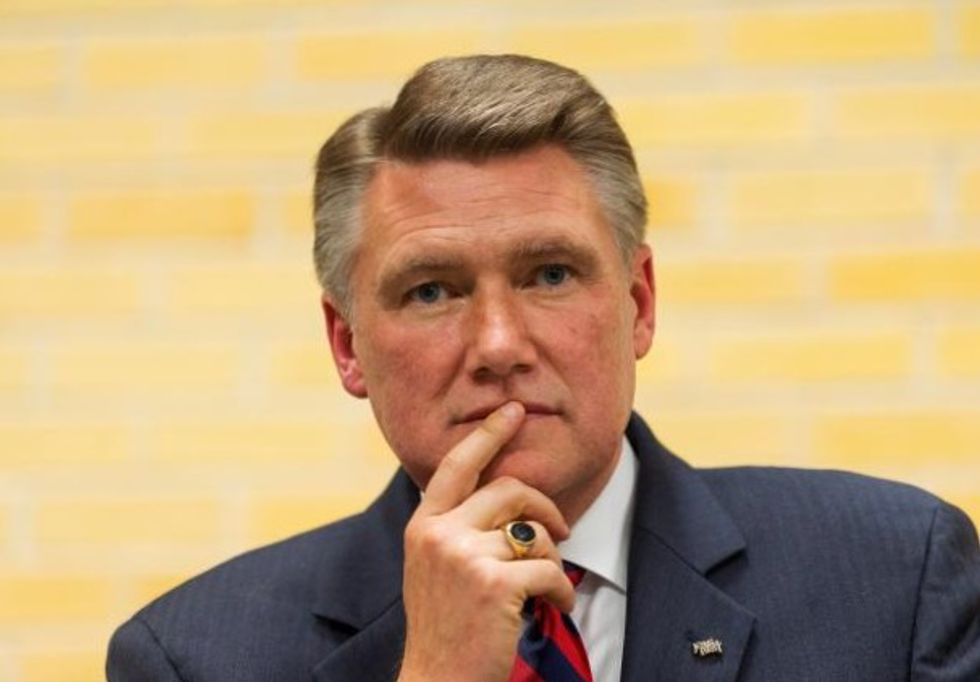 FILE PHOTO: Mark Harris waits to be introduced during a volunteer meeting and rally at the Ardmore Auditorium in Winston-Salem, North Carolina, April 8, 2014. REUTERS/Chris Keane/File Photo

The son of the Republican candidate in a disputed congressional race in North Carolina said on Wednesday he warned his father to be suspicious of a political operative now accused of running an illegal ballot operation to sway the November 2018 election.

A state probe into the election for the 9th Congressional District has uncovered the fraudulent scheme by a consultant working for the campaign of candidate Mark Harris.

The probe could lead to a new election to fill the seat, which has remained vacant since state officials refused to certify Harris’ apparent victory over Democratic rival Dan McCready by 905 votes out of 282,717 ballots cast.

The five-member State Board of Elections heard evidence this week that the political consultant, Leslie McCrae Dowless, hired workers to solicit and collect absentee ballots from voters in violation of state law.

Harris’s son, John, told the board on Wednesday he suspected Dowless had run a similar scheme in a 2016 primary election while working for Republican U.S. House candidate Todd Johnson.

John Harris expressed these concerns about Dowless and “his people” in an email to his father, he said. He also told his father that collecting ballots was a felony.

“The key thing that I am fairly certain they do that is illegal is that they collect the completed absentee ballots and mail them all at once,” he wrote in an email to his father on April 7, 2017, a day after Mark Harris met with Dowless.

John Harris gave the board a copy of his email, which was then distributed at the public hearing.

Harris said he did not believe his father or anyone in his family was aware that Dowless had engaged in any illegal ballot collecting behavior on behalf of his father.

Dowless served six months in jail after he was convicted of felony fraud in 1992, court records show. Media have reported that it was insurance fraud.

Andy Yates, founder and partner of consultancy Red Dome Group and Harris’ top strategist, earlier this week testified that he did not know of Dowless’ past criminal record when Red Dome hired him in 2017.

Yates said Dowless hired workers to collect absentee ballot requests, among other duties pertaining to the 2018 election, but that he never paid Dowless to collect actual ballots.

Dowless’ lawyer has said he did nothing wrong.

State Republicans have pushed for the board to certify Harris as the district’s representative. The U.S. House of Representatives would then determine whether to seat him.

If Democrats pick up the seat, they would widen their 235-197 majority in the House after taking control of the chamber in November.