Suspect in synagogue massacre pleads not guilty to new charges 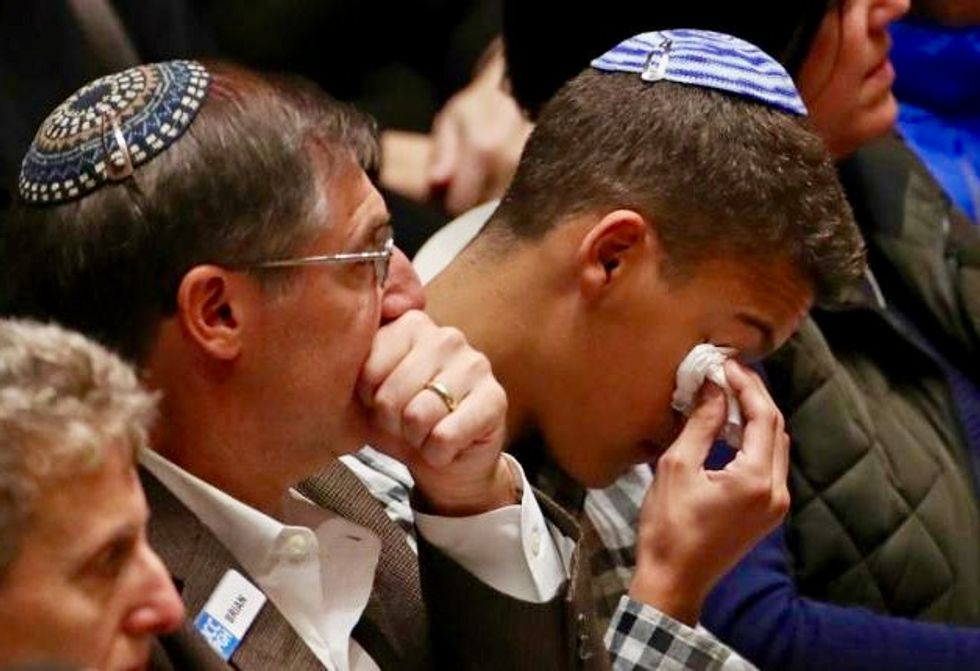 Mourners react during a memorial service at the Sailors and Soldiers Memorial Hall of the University of Pittsburgh, a day after 11 worshippers were shot dead at a Jewish synagogue in Pittsburgh, Pennsylvania, U.S., October 28, 2018. REUTERS/Cathal McNaughton

The man accused of massacring 11 people at a Pittsburgh synagogue last year in the deadliest attack on a U.S. Jewish institution pleaded not guilty on Monday in federal court to a dozen additional charges including hate crimes.

The suspect, Robert Bowers, is accused of bursting into the Tree of Life synagogue in the city’s Squirrel Hill neighborhood on Oct. 27 armed with three handguns and a semi-automatic rifle, and firing on congregants as he shouted “All Jews must die.”

Bowers, 46, pleaded not guilty to 19 fresh charges, which bring the total number of criminal counts he is facing to 63, including use of a firearm to commit murder and obstruction of religious exercise resulting in death.

Federal prosecutor Tony Rivetti said it will take up to three weeks to determine if the government will seek the death penalty.

One of Bowers’ attorneys, Judith Clarke, a death penalty specialist, said the defense hoped to settle without trial. A negotiated plea deal could allow Bowers to avoid facing the risk of execution.

Bowers, who had frequently posted anti-Semitic slurs and conspiracy theories online, sat quietly through the hearing, dressed in a short-sleeved red jumpsuit and shackled at the ankles. He replied “yes” when U.S. District Judge Donetta Ambrose asked if he understood the charges, and he said he wanted to be tried by a jury.

A member of the congregation in attendance at the hearing, Jon Pushinsky, said “We are here to bear witness. We are here to show that this act of violence will not deter us from serving our community.”

The victims of the attack included a 97-year-old woman, two brothers in their 50s and a married couple in their 80s. Two civilians and five police officers were wounded before the suspect was shot by police and surrendered.

On the day of the attack, Bowers, a Pittsburgh resident, said online, “I can’t sit by and watch my people get slaughtered. Screw your optics, I’m going in.”

It also fueled a national debate over the rhetoric of U.S. President Donald Trump, who critics say contributed to a surge in white nationalist and neo-Nazi activity. The Trump administration has rejected the notion he has encouraged far-right extremists who have embraced him.