Trump privately raging at DNI head Coats for lack of loyalty: 'He’s not on the team' 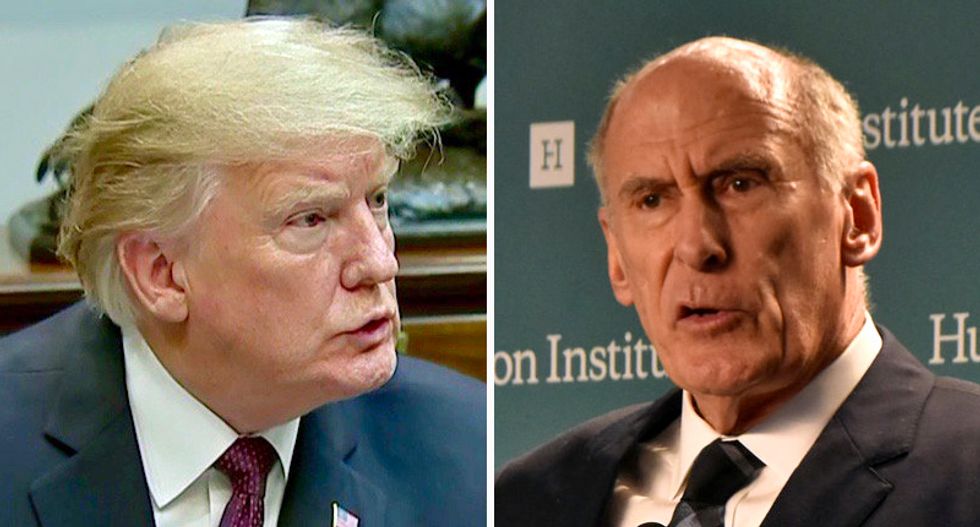 President Donald Trump has become disappointed in Director of National Intelligence Daniel Coats -- who may soon be dismissed -- The Washington Post reported Tuesday.

"The people familiar with the matter, who like others interviewed for this report spoke on the condition of anonymity to discuss internal deliberations, did not believe that Coats would be fired immediately but said that Trump is considering removing him," The Post reported. "They also noted that Trump sometimes grows angry with officials but stops short of dismissing them."

Trump is unhappy Coats gave testimony to Congress which contradicted the president's positions. Trump even went so far as to claim Coats had been "misquoted" in his prepared testimony.

"Trump is still 'enraged' about Coats’s congressional testimony on national security threats last month, believing that the director undercut the president’s authority when he shared intelligence assessments about Iran, North Korea and the Islamic State that are at odds with many of Trump’s public statements, said one adviser who spoke with the president over the weekend," The Post reported.

Trump reportedly complained to the advisor that Coats is “not loyal” and “he’s not on the team.”

And the person behind the White House leaks may be Trump himself.

"In venting his anger at Coats, the president was following a familiar pattern that precedes his dismissal of Cabinet officials. Trump often grouses about disloyalty with the understanding that his interlocutors will speak to reporters, thereby putting the offending official on notice that their days are numbered," The Post explained.