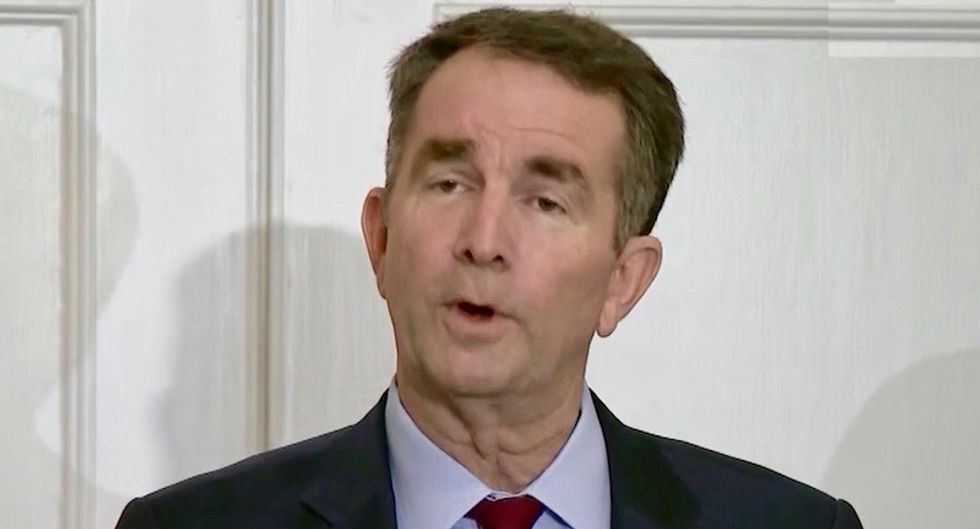 Virginia Governor Ralph Northam met with his Cabinet on Monday amid a chorus of calls from fellow Democrats to resign over last week’s revelation of a racist photo on his 1984 medical school yearbook page.

A few dozen protesters gathered at the state capitol in Richmond to demand Northam step down while the state’s lieutenant governor said there was “a lot of uncertainty” in the state’s government.

A conservative media website on Friday released a page from Northam’s yearbook depicting one person in blackface standing next to a masked person in the white robes of the Ku Klux Klan.

He first apologized on Friday and said he was one of the two people, then changed his story Saturday, saying he did not appear in the photo but had dressed in blackface at another point that year.

The admission drew immediate demands for Northam’s resignation from Virginia politicians, the NAACP civil rights group and national political figures. At least five Democratic presidential candidates, including U.S. Senators Cory Booker and Kamala Harris, both of whom are black, said Northam had lost the moral authority to lead.

Northam’s office did not respond to questions about his plans on Monday but local media outlets reported he was meeting with advisers.

Lieutenant Governor Justin Fairfax, who is black, said he was not sure what Northam’s next move would be.

“I believe the governor has to make a decision that’s in the best interest of the commonwealth of Virginia,” Fairfax told reporters at the capitol.

Asked if he was taking preparing for a possible elevation to governor, Fairfax replied, “There is a lot of uncertainty right now in our government. But we always have to be ready.”

Should Northam resign, Fairfax, 39, would be the second black governor in the history of Virginia, where his great-great-great grandfather once was a slave.

Earlier on Monday Fairfax released a statement denying a vague online report that a woman suggested he had sexually assaulted her in 2004.

“Tellingly, not one other reputable media outlet has seen fit to air this false claim,” the statement from Fairfax’s office said.

At least two media outlets, including the Washington Post, said a woman had approached them more than a year ago with the same allegation. The outlets said they had been unable to substantiate her claim.

The report of the allegation was published on the same website, Big League Politics, that first published Northam’s yearbook page.

Northam said on Saturday he had donned blackface in the 1980s to portray pop star Michael Jackson in a dance competition.

During the Saturday news conference, Northam made light-hearted remarks about how hard it is to clean black shoe polish from one’s face and whether he should perform Jackson’s signature moonwalk dance moves before the cameras before accepting his wife’s advice not to.

“What happened Saturday was an unfortunate display, and rather tone-deaf to what the impact really is,” Derrick Johnson, the president of the National Association for the Advancement of Colored People, or NAACP, told MSNBC on Monday.

(Reporting by Jonathan Allen in New York; Additional reporting by Gary Robertson in Richmond and Katharine Jackson in Washington; Editing by Scott Malone and Bill Trott)