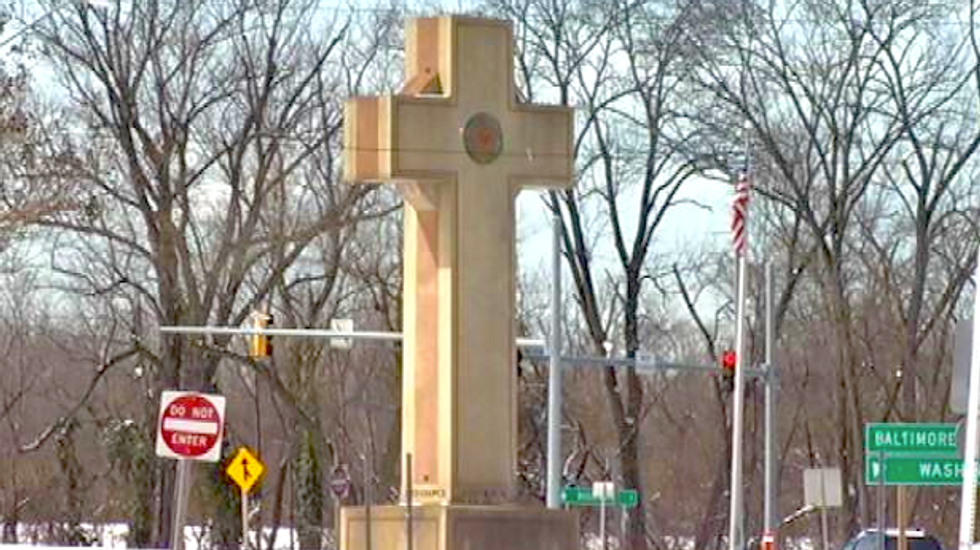 When Fred Edwords first drove by the 40-foot-tall (12 meters) concrete cross that has stood for nearly a century on a busy intersection in suburban Maryland outside the U.S. capital, his first reaction was, “What is that doing there?”

To Edwords, who believes there should be an impermeable wall separating church and state, the location of the so-called Peace Cross - a memorial to Americans killed in World War One situated on public land, with vehicles buzzing by on all sides - seemed to be a clear governmental endorsement of religion.

“It’s so obviously part of the town and a centerpiece. It just popped out at me. There was nothing about it that made me think it was anything other than a Christian cross,” Edwords, 70, said in an interview.

Edwords and two other plaintiffs filed a 2014 lawsuit challenging the cross as a violation of the U.S. Constitution’s Establishment Clause, which prohibits the government from establishing an official religion and bars governmental actions favoring one religion over another.

The conservative-majority court will hear arguments in the case next Wednesday, with a ruling due by the end of June.

While the Establishment Clause’s scope is a matter of dispute, most Supreme Court experts predict the challenge to the Peace Cross will fail, with the justices potentially setting a new precedent allowing greater government involvement in religious expression.

The Peace Cross, now aging and crumbling a bit, was funded privately and built in Bladensburg in 1925 to honor 49 men from Maryland’s Prince George’s County killed in World War One. The property where it stands was in private hands when it was erected, but later became public land.

Its supporters include President Donald Trump’s administration and members of the American Legion veterans’ group, who hold memorial events at the cross. At a recent gathering at a nearby American Legion post, veterans and their relatives said the monument has no religious meaning despite being in the shape of a Christian cross, calling the lawsuit misguided and painful.

To Mary Ann Fenwick LaQuay, 80, the cross respectfully chronicles the war sacrifice of her uncle Thomas Notley Fenwick, one of 49 honored.

“It hurts people who have family members there. Every time I go by there, I think of my uncle. It hurts to think people would take it away,” she said.

Stan Shaw, 64, a U.S. Army veteran, said it appeared the challengers were going out of their way to take offense.

“If you don’t want to see it, take another route,” Shaw added.

Aside from its shape, the cross has no other religious themes or imagery. At its base is a barely legible plaque listing the names of the dead. Every year, ceremonies with no religious content are held at the site, lawyers defending the cross said.

Edwords, who is retired, is a long-time member and previous employee of the American Humanist Association, which advocates for the separation of church and state. He and his fellow challengers said they support veterans and that the lawsuit concerns only the symbolism of the cross, not the fact that it honors war dead.

The Richmond-based 4th U.S. Circuit Court of Appeals ruled that the cross was unconstitutional, reversing a Maryland-based federal judge’s decision allowing the monument.

The Supreme Court will hear appeals by the Maryland-National Capital Park and Planning Commission, the public agency that owns the cross, and the American Legion, which is represented by the conservative religious rights group First Liberty Institute.

The Supreme Court has sent mixed messages about the extent to which there can be government-approved religious expression, including in two rulings issued on the same day in 2005.

In one case, it ruled that a monument on the grounds of the Texas state capitol building depicting the biblical Ten Commandments did not violate the Constitution. But in the other, it decided that Ten Commandments displays in Kentucky courthouses and schools were unlawful.

More recently, the court in 2014 ruled that government entities do not automatically violate the Constitution when they hold a prayer before legislative meetings.

In some other recent cases, the court has taken an expansive view of religious rights. In 2014, it ruled that owners of private companies could object on religious grounds to a federal requirement to provide health insurance that included coverage for women’s birth control.

It ruled in 2017 that churches and other religious entities cannot be flatly denied public money even in states whose constitutions ban such funding. In a narrow 2018 ruling, the court sided with a Colorado baker who refused to make a wedding cake for a gay couple, citing his Christian beliefs.

The American Legion’s lawyers are asking the court to decide that government endorsement of religion is not the appropriate test in the Peace Cross case. Instead, they said, courts should conclude that the government violates the Constitution only when it actively coerces people into practicing religion.

Such a ruling would give public officials “carte blanche to have symbols anywhere,” said Marci Hamilton, a University of Pennsylvania expert on law and religion who joined a legal brief supporting Edwords.

Edwords conceded that the lawsuit could end up backfiring on his side with a ruling against him but stands by his decision to challenge the cross.

“We are not trying to be revolutionary here,” Edwords said.