A massive plume of black smoke hangs over Houston. Here’s what you need to know about the Deer Park terminal fire. 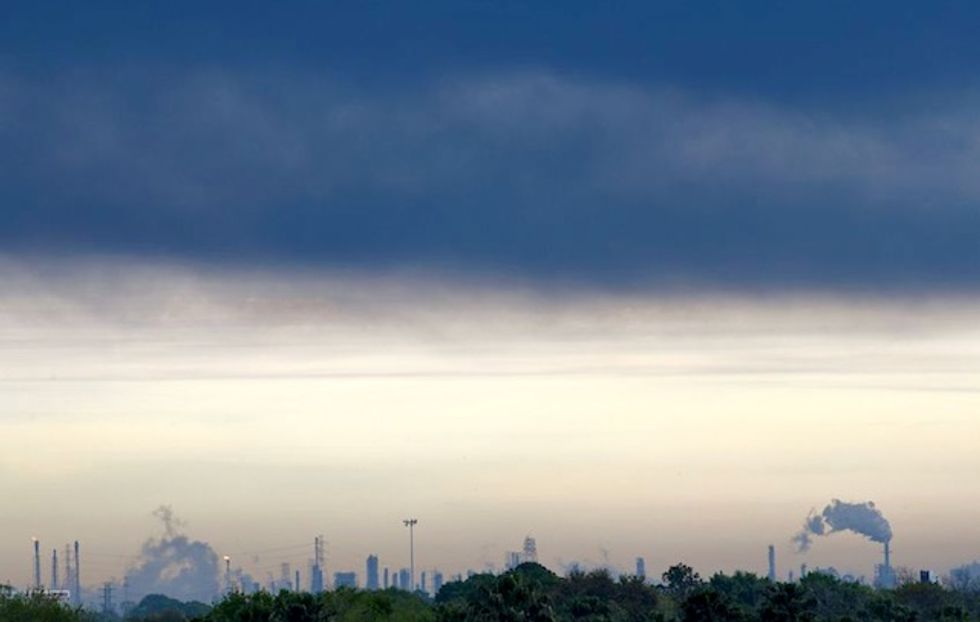 A thick layer of smoke hangs in the air from a fire burning at the Intercontinental Terminals Company in Deer Park, east of Houston. REUTERS

A fire that broke out at a petrochemical storage facility over the weekend in the industrial Houston suburb of Deer Park continued to burn Tuesday after intensifying overnight. Despite the tall black plume that has billowed over the nation's fourth-largest city for two days, state and local officials have emphasized that monitoringdata show the air is still safe to breath.

When did the fire start, and where do things stand now?

A fire broke out Sunday morning at a facility owned by Houston-based Intercontinental Terminals Company, a 265-acre compound that sits along the Houston Ship Channel, about 24 miles east of downtown Houston. The blaze began at one of more than 240 storage tanks that hold chemicals used in gasoline — like naphtha and xylene — and spread to several more.

The fire intensified from Monday night to Tuesday morning "due a temporary reduction of water pressure" that hampered firefighting efforts, according to a statement from the company issued in the wee hours Tuesday.

"Due to the fire's intensification during the night, two additional tanks have become involved bringing the number of tanks involved in the fire to 8, which includes two empty tanks," the statement said.

The fire remained contained to the tank farm as of late Tuesday, according to the Harris County Office of Homeland Security and Emergency Management.

Officials on Monday had said the fire could burn for two more days, but they backtracked Tuesday, with Harris County Fire Marshal Laurie Christensen telling the Houston Chronicle that a definitive timetable no longer exists.

What are the health risks?

In a statement Tuesday, the Texas Commission on Environmental Quality, the state's environmental regulatory agency, said that levels of particulate matter "increased slightly" overnight in areas around the fire but that they have "since decreased and have consistently remained below levels considered unhealthy for sensitive groups."

Still, it said that sensitive populations — including children and the elderly — "should consider limiting their exposure to the ambient particulate matter by decreasing outdoor exercise or moving into air-conditioned buildings" and that "all residents should avoid being directly in the smoke plume" and contact their doctors if they experience health problems.

The agency, which maintains permanent stationary air monitors in the heavily industrialized region, said it deployed two additional air-monitoring stations to the area and that staff are conducting hand-held air monitoring "and overseeing collection of sampling in nearby waterways."

Air quality has remained safe on the ground level largely because the plume remains elevated.

But Elena Craft, a senior health scientist at the Environmental Defense Fund, warned in an interview Monday that the smoke could settle.

What are the safety risks?

No injuries have been reported at the facility, and there have been no official warnings about potential explosions.

What is Intercontinental Terminals Company?

The petrochemical storage company opened its Deer Park facility in 1972 and now has locations in Pasadena, Texas; Baton Rouge, Louisiana; and Antwerp, Belgium, according to its website.

The website says the company boasts "the premier storage facility on the U.S. Gulf Coast" and "prides itself on providing top notch customer care while maintaining the highest safety standards in the industry."

Still, the company has a history of environmental violations.

The Texas Commission on Environmental Quality has fined the company at least 10 times since 2002 — and at least twice last year — for various pollution incidents. The company also has been in "significant" noncompliance with the federal Clean Water Act for nine of the last 12 quarters, according to an Environmental Protection Agency enforcement database.

That includes an incident last year in which the company released more than 10 times the allowable limit of cyanide into the San Jacinto River basin from April through June.