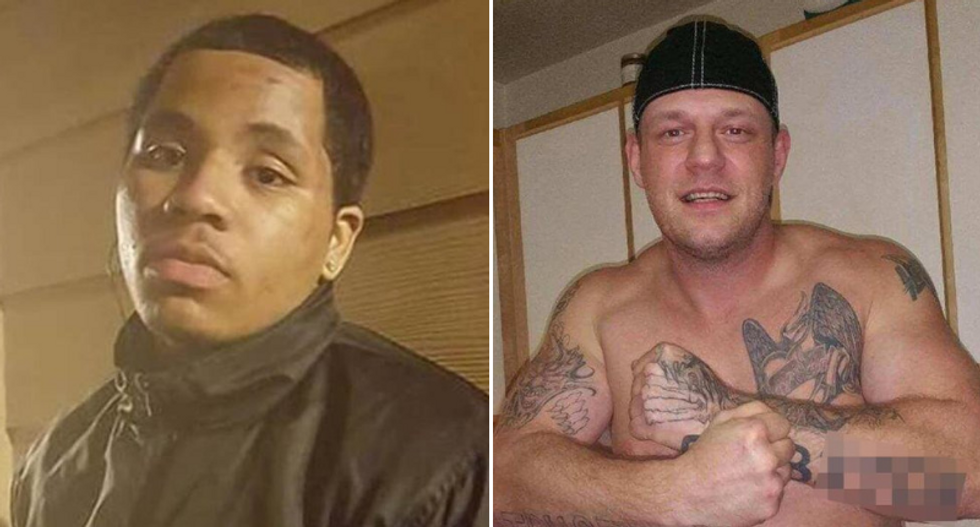 The late Larnell Bruce Jr. (left, via Gresham Police) and Russell Courtier, the man accused of killing him (right, via Facebook).

The attorney for an Oregon man tied to white supremacist groups has offered "brain damage" as a defense for the 2016 murder of a black teenager.

The Oregonian reported that Russell Courtier, the white Portland man accused of hitting and killing Larnell Bruce Jr. in August 2016, claims he was brain damaged from a fight with the black 19-year-old — and that's why he ran him over with his car.

The 40-year-old Courtier was allegedly spurned on by his girlfriend Colleen Hunt, who was heard yelling "get him baby!" and "run him over!" by witnesses who spoke to the police after Bruce was killed.

Kevin Sali, the accused man's attorney, told jurors that his client "never wanted any of this to happen."

Prosecutors allege that "Courtier hunted and chased Larnell Bruce in his girlfriend’s large, red Jeep" and that he "had one intent, and that was to kill Mr. Bruce."

As the Portland Mercury reported in 2016 after a hate crime charged was added to Courtier's charges, the Multnomah County, Oregon ex-con is a "documented member" of the prison-based white supremacist European Kindred gang, the initials for which he has tattooed on his forearm.

Prosecutors claim Courtier and Hunt, age 37, worked together to kill Bruce. She is also on trial for her alleged role in the slaying.