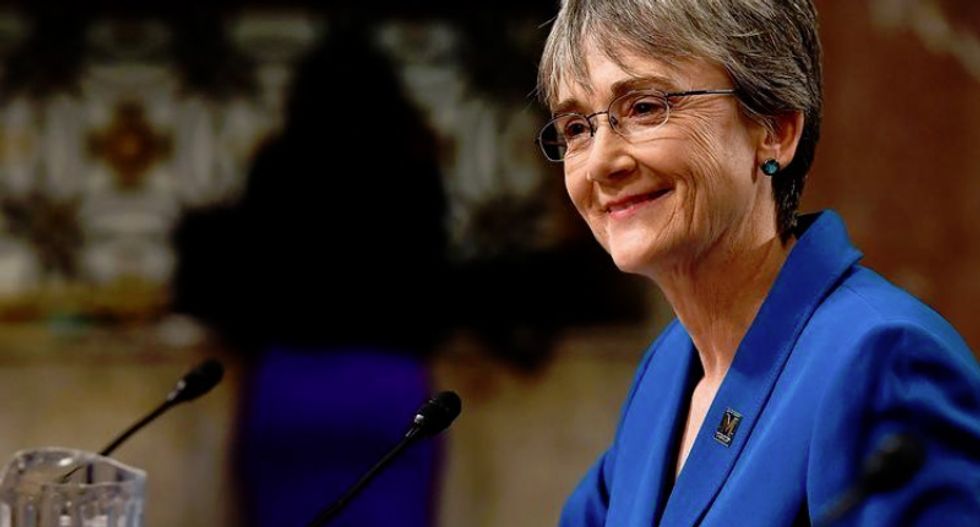 U.S. Air Force Secretary Heather Wilson, who was considered a top candidate to become the next secretary of defense, said on Friday she has decided to resign and return to academia, leaving another vacant post at the top level of the Pentagon.

Wilson confirmed the news, first reported by Reuters, in a tweet, saying she had informed President Donald Trump on Friday of her plans to become president of the University of Texas at El Paso. She plans to step down on May 31.

The resignation leaves another senior Pentagon job open and follows the December departure of Defense Secretary Jim Mattis, who quit over policy differences with Trump and had picked Wilson for the post.

Like Mattis, Wilson was a staunch advocate of alliances like NATO and firmly supported Mattis’ push to refocus the Pentagon on higher-end competition with China and Russia after more than a decade-and-a-half of counterinsurgency campaigns. “It has been a privilege to serve alongside our Airmen over the past two years and I am proud of the progress that we have made in restoring our nation’s defenses,” Wilson, 58, said in her resignation letter to Trump.

A former Republican lawmaker who was close to Trump’s vice president, Mike Pence, Wilson would have been the first woman to take the Pentagon’s top job, if she had been nominated.

Mattis’ deputy, Patrick Shanahan, a former Boeing executive, is now performing the role in an acting capacity in what is widely seen as an audition for the position. Wilson’s resignation could add to speculation that Shanahan may remain in the post of defense secretary.

Other top Pentagon positions, including the deputy defense secretary, are either being filled provisionally or are vacant.

“Everyone she has talked to wants her to stay, but she thinks the time is right to take on this new challenge,” a U.S. official said, speaking on condition of anonymity.

Wilson informed Pence of her decision earlier in the week and Air Force Chief of Staff David Goldfein on Thursday, the official said.

The University of Texas Board of Regents still has to approve Wilson’s selection to head its El Paso campus, but she is the sole finalist.

It is unclear who might succeed Wilson and inherit steep challenges facing the Air Force, which include the creation of Trump’s “Space Force,” a new branch of military service that will carve out some responsibilities current done by the Air Force. The Air Force is also reeling from a fresh scandal involving sexual assault.

Wilson was the first Air Force Academy graduate to ever take the highest position in her service, and counted a robust resume that included a decade as a Republican lawmaker in Congress. She also served on the National Security Council staff during the George H. W. Bush administration, and as president of the South Dakota School of Mines and Technology.

After joining the Pentagon, Wilson visited Iraq and Afghanistan and came away concerned about the wear and tear on an Air Force that she thought was too small, especially as the Pentagon shifted its focus to competition with Russia and China.

Last fall, she predicted the Air Force would need to grow sharply over the next decade or so, boosting the number of operational squadrons by nearly a quarter to stay ahead of Moscow and Beijing.

She told reporters at the time that the preliminary analysis drew partly from classified intelligence about possible future threats, showing that Air Force, at its current size, would be unable to preserve the United States’ edge.

Wilson estimated the Air Force would need about more 40,000 personnel as part of the plan to have a total of 386 operational squadrons, compared with 312 today. The U.S. Air Force had 401 squadrons in 1987, at the peak of the Cold War.